Sometimes things die, and sometimes you just think they do. My nastturtiums revived with moisture and cooler fall temperatures after a combination of high heat and no rain nearly killed them. I removed all of the crispy, light tan leaves and cut the plants back to the new growth in August. 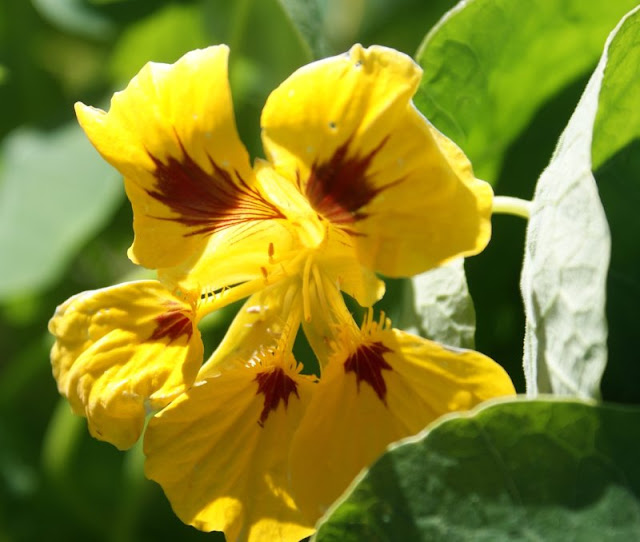 Today, they are lusher and more beautiful than ever. 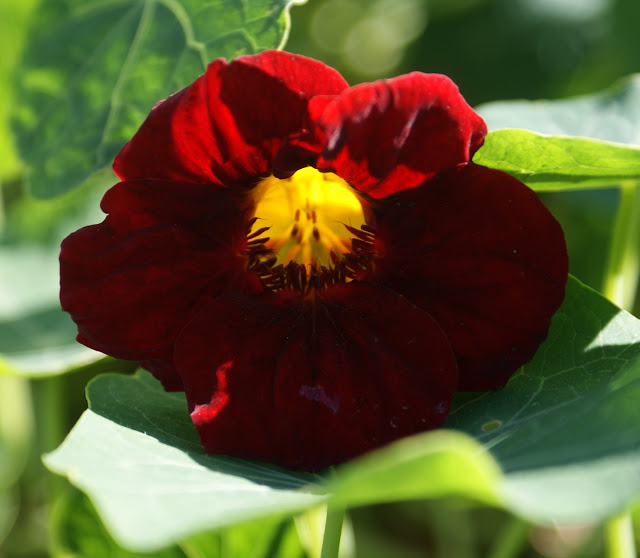 Nasturtiums are not only beautiful, providing edible flowers and leaves, but they also help deter some garden pests, including squash bugs (!) and cucumber beetles, I recently learned. Next year they will be companions to my cucumbers and squashes.

This year’s nasturtiums grow along the mounded gardens at the feet of peppers and tomatoes. A little more information about nasturtiums and some recipes that include them can be found at this Web site, http://oldfashionedliving.com/nasturtiums.html 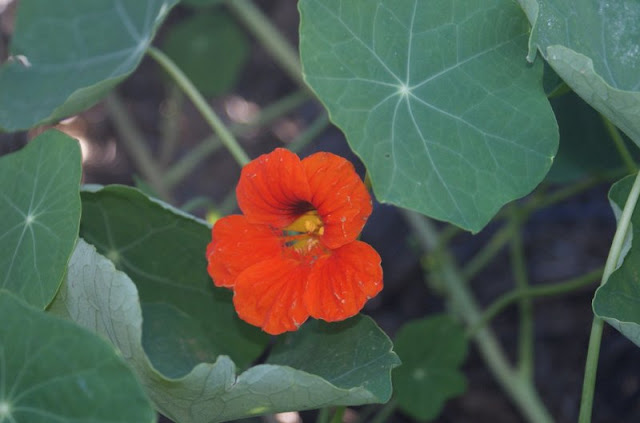 Posted by Sandra M. Siebert at 2:15 PM No comments: 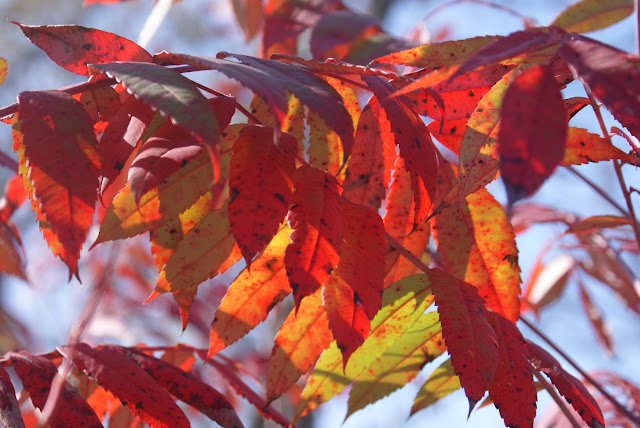 The fading days of autumn 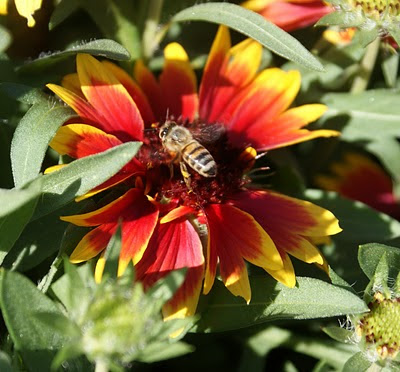 Silently releasing
And floating softly
To the ground.

The golden light
Illuminates the red
On the sumac branch
More vibrantly
Than can be seen in summer.

The fading days of autumn
Rattle against the soul
Like wind in the cottonwoods,
Swirling and tumbling,
Skittering in a rush
To nowhere in particular. 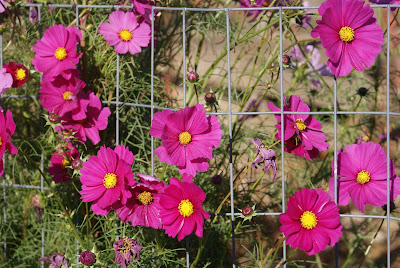 All the garden explodes 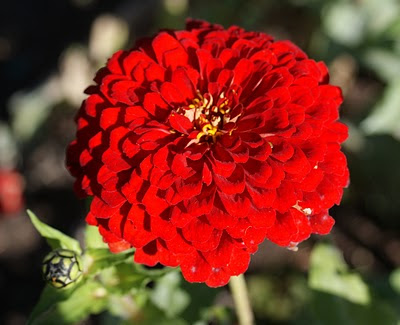 Into colorful bloom,
One last, glorious shout
Before winter rakes
Its scythe across
The land.


The fading days of autumn
Seep into the soul
Like frost settling to the ground,
And we draw ourselves
Together for warmth. 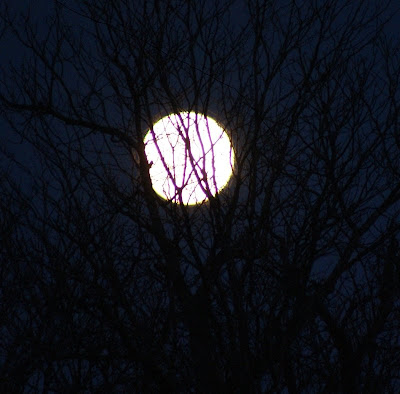 The sharp moonlight
Breathes ghosts across the sky,
Illuminating the path
To forever.

We contemplate the garden's demise
And watch the resurrection
of flowers withered by summer's heat,
Forced to face our own
Withering and rebirth,
As the fading days of autumn 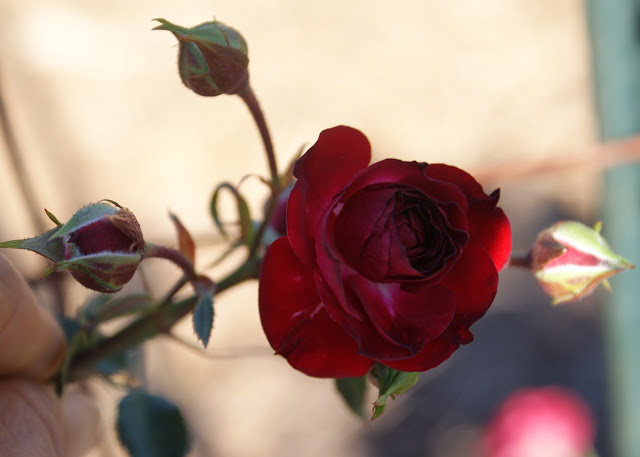 Queen of the Night 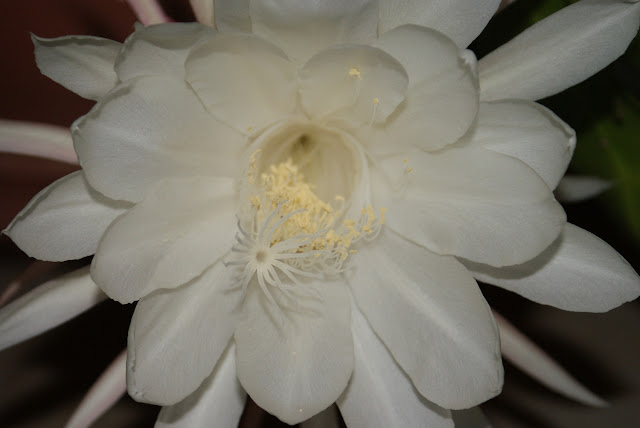 The Night Blooming Cereus has a spectacular bloom larger than a softball when full open. Like most night-blooming plants, that flower is highly fragrant. All the better to attract pollinators in the dark.
I have had my small specimen of Night Blooming Cereus, Epiphyllum oxypetalum, for about three years. A week or more ago I noticed its long, pink flower stalk.

The long, pink calyces wrapped around the swelling bud like ribbons in a work of modern art. I wish that I would have photographed the various bud stages, as they are almost as beautiful as the bloom.
On Saturday, I noticed that the bud had become all white and was swollen, looking ready to burst. I move the otherwise unassuming-looking plant from the north side of the house to a more prominent location, where we could catch its brief blossoming.

Fortunately, we did not have to wait until after midnight for the bud to open and release its intoxicating fragrance, but it was still quite late in the evening. By morning, the blossom had loosely closed and was beginning to wilt. I don't know how long I will have to wait for it to bloom again.
In the photo below you can see some of this epiphytic cactus' flat leaves -- or stems, it's difficult to say with cacti. Epiphytes take their nutrients from the air instead of from their roots. The roots are mainly to hold the plant in place and to take in water.﻿ 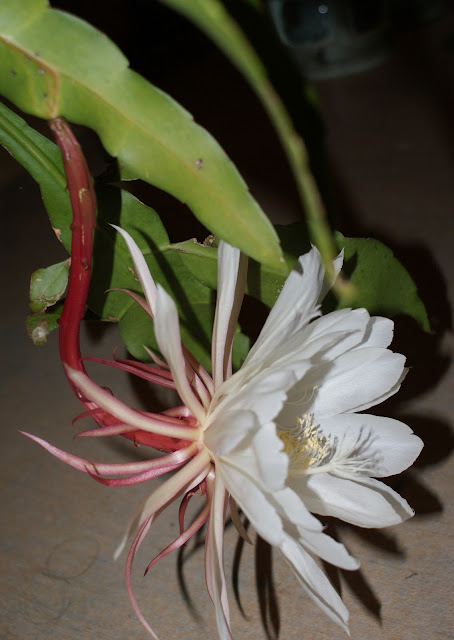 Epiphyllum oxypetalum is but one of several plants that go by the name Night Blooming Cereus.
Posted by Sandra M. Siebert at 1:46 PM No comments: 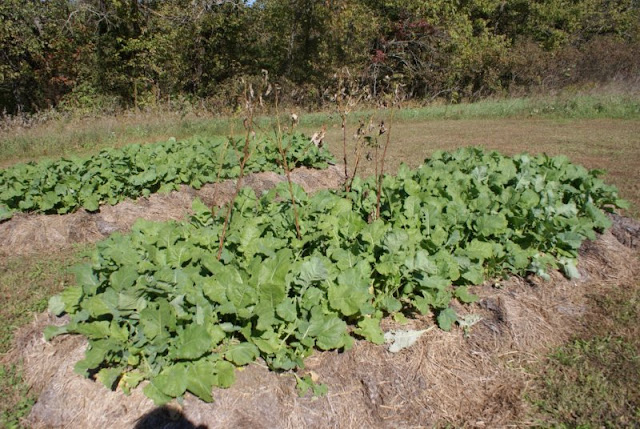 Sometimes you get things you don't plan for. These two thick patches of collard greens came up spontaneously in new beds created for red raspberries. The seed was in home-cooked compost that was spread on the beds in late summer. I was going to pull out all of those "weeds," but it has been so long since we've had homegrown greens, and we eat lots of them. You can see the few raspberry canes I've planted in the forward bed. The only watermelons I harvested this year came from this vine that came up on its own in a flower bed that had been the site of a compost heap last year. Compost heaps are a rich source of these "volunteers." We've always got something growing at the edges of the compost heap.

Although the watermelon and collards were accidental, I always plan for some things to set seed and sprout in the garden each year. The arugula plant below is from seed that fell from the spring crop. These "self-sown" seeds always produce before the ones I plant. 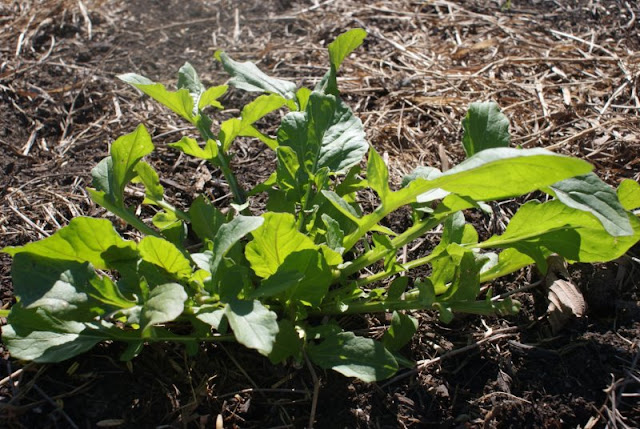 The flower and herb garden also is full of things that I depend on to self sow each year. Poppies seem to do better this way. I also always have nigella, calendula, thyme, sage, dill, coriander and others from last year's upstarts. The ornamental amaranth below is a descendant of several generations of plants that come from self-sown seed (seed dropped to the garden directly from the plant). 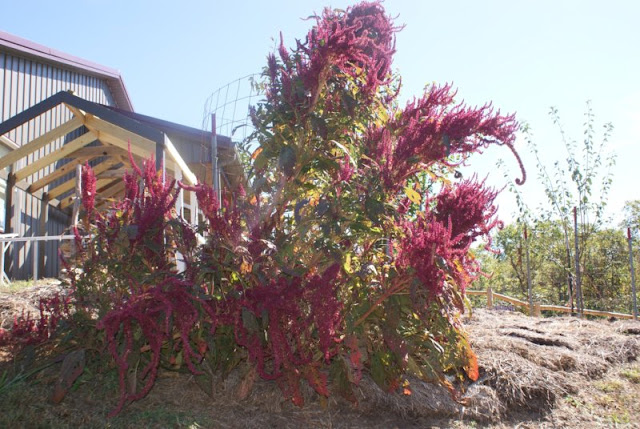 Posted by Sandra M. Siebert at 3:03 PM No comments: 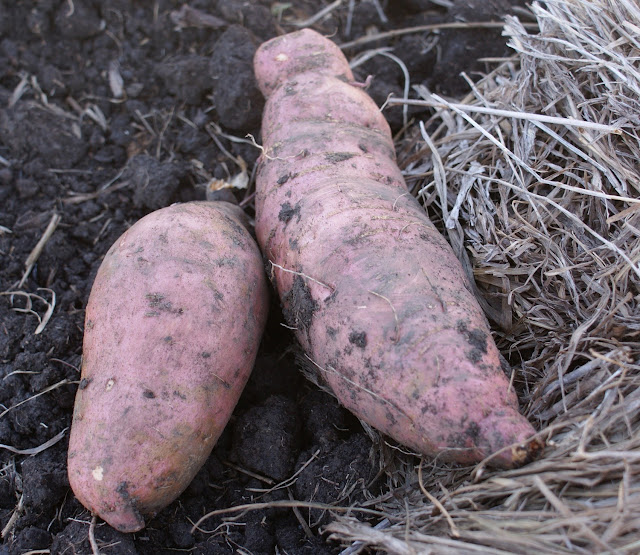 Yesterday morning the thermometer said 37 degrees. That's not quite down to freezing, but I think I saw patches of frost on the straw mulch in the south garden area.
Nothing seemed affected by the frost, except the watermelon vine at the back end of the north garden.
When I went to the bottom of the hill that afternoon, however, I found that the sweet potato vine growing below the dam had been seriously affected. It would have been a mass of blackened foliage, if some hungry deer had not eaten off most of the leaves. The few leaves that were left were black and shriveled.
So I trudged back up the hill and got the broad fork and bucket so I could dig.
This is not an unusual end to a sweet potato in Kansas.
But this particular vine has a tale. It is the single survivor of 12.
I planted sweet potatoes in late May on a Monday, at the beginning of what would turn out to be an unusually hot, dry week. I watered the 12 little starts, mulched them well and even put some row cover over them to protect them from bunnies and deer, give them a tiny bit of shade and slow moisture loss.
Then I pretty much forgot about them as I prepared for a long camping weekend.
When I returned from camping I remembered the sweet potatoes and how long they had gone without anymore water. I pulled off the row cover in panic to find just this one survivor.
Several weeks later, while weeding that garden area, I found three more puny, but alive survivors.
Funny, though, after the weed camouflage was removed, they got eaten off by deer or rabbits. The first known survivor had its leaves nibbled off, too, but unlike the other three, it continued to grow.
By late summer the surviving vine had covered most of the area where the sweet potatoes had been planted. It had suffered neglect when first planted, and extremely hot weather later in the summer. I did water it during that time because I was watering the nearby fruit trees and berry bushes.
After the frost damage, I sunk the broadfork's teeth into the soil and heard an ominous crunch. When I pulled it out, a piece of a rather large sweet potato came out. I dug out a couple more pieces of that one, plus pieces of another large one. I was digging about a foot away from the base of the vine, so I thought I would miss them all.
I found a couple of small potatoes and two larger ones that actually came out whole. Not much of a harvest.
Maybe I missed some, but I dug and dug and found no more.
And with that, the survivor's tale ends.
Now it's time to plant the garlic.
Posted by Sandra M. Siebert at 8:28 AM No comments: