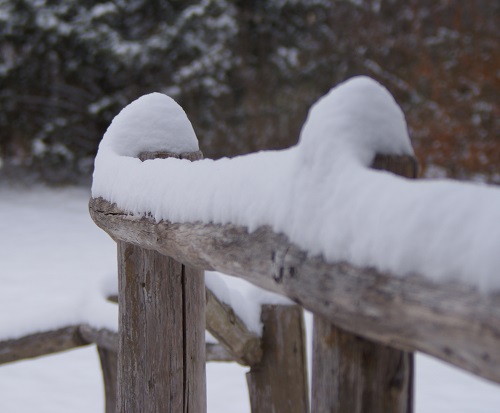 Perfect white crystals piled on the railing outside my back door.

White crystals piled in a sheer slope, a (sort of) straight line edge atop.

Perfect domes on the posts.

Nature, what an engineer.

Black and white and gray. 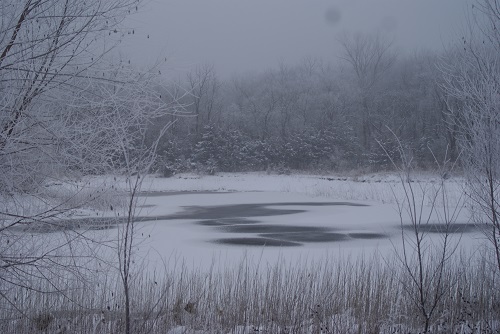 Nature, what an artist.

I've always felt that fog was magical, I could step into the gray and through to a different place. So I went out into the misty winter morning, down to the pond covered in ice, covered in snow.

Was the spring flowing? I wondered. A long trek to the other side of the pond to check. But I trekked.

I was not the first one to pass this way -- deer tracks in the snow. 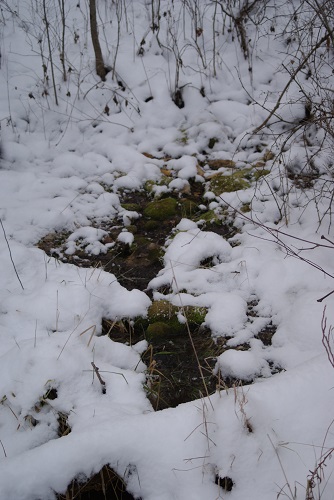 A patch of blackberry brambles. I tried to push my way through. Backed out and tried again.

OK. So that's why no deer tracks went through here. I find my way around, through tall grass buried in snow.

And there it is, where water seeps from the ground, over green moss-covered stones, at the base of the hill. An open place in the snow, a small stream of water, a bare flicker of movement. A bare flicker.

I recall the first time I saw this place... February... 15 degrees Fahrenheit... a world covered in snow. Water flowed so that I could hear it as I came down the hill on the other side of the pond.

Today, barely a flicker. December. Perhaps another day it will flow and fill the pool. But today it sleeps. Sleeps. Dreams.

Nature, what a dreamer.
Posted by Sandra M. Siebert at 8:33 PM No comments:

Rosemary by Any Other Name... 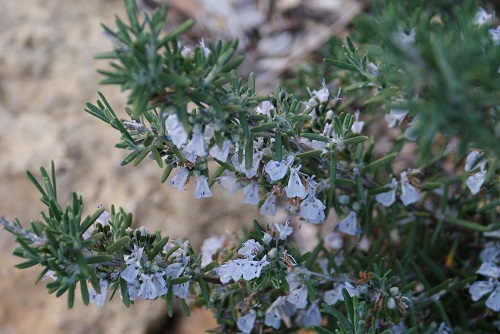 Ophelia's words in Shakespeare's Hamlet succinctly states one of the many things for which the herb rosemary can be used. In this instance, Ophelia refers to the Victorian era's language of flowers, in which sprigs of rosemary are placed in a small bouquet to implore the recipient to hold the giver in memory. Or it indicates that the giver will always remember... Sometimes rosemary is placed in funeral wreaths so that we might remember the deceased.

The quote from Shakespeare was repeated, at least one, in one of Agatha Christie's novels, "Remembered Death," in which we enter the story six months after the murder of a beautiful woman named Rosemary. I was certain the novel contained some other quote or reference I could cite in this blog, so I looked through the book (which I hadn't read in ages), became intrigued by the story, and spent an entire afternoon ostensibly looking for useful references to rosemary. In fact, however, I was simply intrigued to find the solution to the mystery. I didn't sit and read the entire thing, just jumped through and reading large portions, formulating my own solution. As is often the case in Mrs. Christie's novel, I was on the wrong track. I got one bit right, but the murderer wrong.

Rosemary is a wonderful plant. It's narrow, blue-green leaves possess a refreshing resinous fragrance reminiscent of pine. And aside from symbolizing remembrance, it is used to enhance memory and clear cognitive function. Ancient Greek scholars would wear rosemary in their hair as they studied for exams to boost their memory. Indeed, when used regularly, rosemary can help improve cognitive function, including memory. I've found that the scent helps clear away mental cobwebs when the brain becomes weary. I have taken sprigs of fresh rosemary to work so I could inhale its scent and freshen my mind when I experienced those mid-afternoon doldrums. Inhaling the scent of rosemary essential oil works the same way.

When studying rosemary a while back, the one aspect that stood out to me (according to my notes) was "clarity." Rosemary assists mental and psychic clarity. It's also antimicrobial, so inhaling its scent or drinking a tea of rosemary can help prevent illness. Diffusing rosemary essential oil in a room also cleanses the air.

All that aside, rosemary is great in the kitchen. We stuff whole, fresh sprigs of it under the skin of chicken before we cook it. As an evergreen plant (if you live in USDA zones 8-10) rosemary is associated with this time of year, when various cultures bring evergreen boughs in to decorate homes. Christmas lore has Mary drying her cloak on a rosemary shrub, thus giving it its fragrance and pretty blue flowers.

I have become quite familiar with and fond of rosemary, Rosmarinus officinalis.

Except, officially, it's not R. officinalis any longer.

They've gone mucking about and studying its gene (how rude!) and have discovered that it is too closely related to sage, plain old garden sage, Salvia officinalis, place it in a different genus. Of course, rosemary is related to sage. Both belong to the same family, the mint family, Lamiaceae (formerly Labiatae), which also boasts thyme, peppermint, and a host of other familiar herbs. But it's always had its own genus, Rosmarinus.

Now we must call rosemary Salvia rosmarinus. (Explanation here.) Which means it loses its "officinalis" tag. That species name was given to a number of plants that were once part of official apothecaries. Not that it changes anything, really. But somehow it seems offensive to so abruptly change the scientific name of such a noble plant. Chamomile has suffered that offense more than once, so that I'm not exactly sure what the genus species name is now. And taxonomists have changed family names at time (see my above reference to two names for the mint family). The cabbage/mustard family was once Cruciferae and is now Brassicaceae. The Compositae family is now known as Asteraceae.

Not that the plants care. Only plant geeks like me, and anyone who has reason to deal with scientific names of plants will care. It's always good to know a plant's scientific name, so that when you're dealing with a plant that shares a common name with another species, or which has multiple common names, you can be sure and get the specific plant you want. Herbalists are wise to keep up on such things.

I'm not sure why this name change affected me so. Perhaps because rosemary is such a singular plant and renaming it to belong in a genus with dozens of other plant species just seems wrong. I'll get over it.

NOTICE: I'm back. Not sure why I've been gone for so long. Just one of those things. So I came back with a sprig of rosemary... "that's for remembrance; pray, love, remember" me.
Posted by Sandra M. Siebert at 4:46 PM No comments: