It's freaky.
Frightening even.
I read about it a number of years ago and felt anxious about the prospect of ever finding it in my garden.

A vampire among plants.

It even looks creepy. Jaundiced yellow strings slung across the green growing stuff. My husband likened it to yellow Silly String.

Are you recoiling in horror?


Perhaps the name doesn't quite strike terror in your soul, but some of its other names will -- Hellweed, Devil’s Guts, Strangle Tare, Scaldweed. 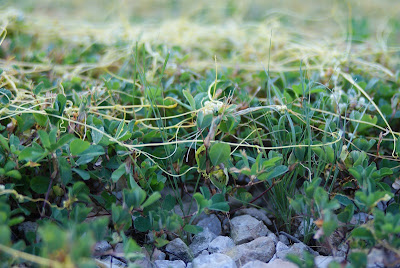 So, maybe you're not quite quivering in fear, but dodder is not something you want lurking about.

Dodder is a parasitic plant that is capable of very minimal photosynthesis on its own. It gets pretty much all of its food from the plants it attaches to.

Dodder seed sprouts in the soil, sending up yellow tendrils that wave about "feeling" or "sniffing" for a host plant. When it finds one, it sends roots, called "haustoria," into the green flesh of the plant and its connection to the soil withers. Then it becomes completely dependent on the host plant.

Fortunately, many dodder species are somewhat host specific and will not parasitize or "vampirize" every plant it finds. Many species of dodder exist, but I don't have a clue how they tell them apart. You can find out what species of dodder are likely to infest your region here.

Grasses and cereal grains tend to be non-hosts, so you can plant these in an area where dodder has appeared to starve it out. Unfortunately, dodder seeds tend to be rather long-lived, spending a decade or more in the soil before sprouting, so once it appears, you need to keep an eye on the area for quite a while to manage any recurrence. The scariest type of dodder is the Japanese dodder, now invading California, which can completely cover fruit trees, particularly citrus.

The sickly looking patch of dodder showed up in an area of black medic, a leguminous "weed" closely related to alfalfa, one of the dodder hosts of main commercial concern. Other legumes, as well as tomatoes and their relatives, are susceptible to dodder. Fortunately, you can get rid of it fairly easily by cutting off the host plant below where the dodder has attached. Then burn it!

I chose to simply kill out the patch of black medic -- kill host plant and dodder with (gasp) herbicide and will let grass move in. I will keep an eye open for any future dodder sprouts and get it before it creates a 4x4-foot patch again. And I'll keep an eye on any other plants to make sure we haven't inadvertently spread dodder seed elsewhere.

While researching dodder, some vague tendril of memory told me that it might have medicinal value. And indeed it does!

Posted by Sandra M. Siebert at 5:00 PM No comments:

Berry season is slowing down. The black raspberries are nearly finished. They were not as prolific this year as last year, probably because we didn't water them much through last summer's drought and I failed to apply compost in the fall. Many of the floricanes are dying before the berries are fully formed. Not sure why, but that's the way it is. This week I hope to go through and cut out all of the second-year canes (floricanes, or fruiting canes) leaving only this year's growth. Then I will give them a good dose of compost. Later I will dig some of the little suckers and use them to finish out the bed where the black raspberries grow.

However, the blackberries have performed fabulously. Nearly three gallons of berries are in the freezer, and we've had our fill of sweet, juicy blackberries to eat. I've also had my fill of black raspberries, as well as a few extra for the freezer, but not like the blackberries.
﻿﻿
Last year was the first year the blackberries were in their current location. I had mistakenly planted them in too tight of a space, so I dug them all and moved them to more spacious quarters. We got just a few berries last year, but they are now fully settled in and have amazed us with their prolific nature. Since they are a primocane producing variety -- they flower and fruit on first-year canes as well as second-year canes -- we should get some berries until freezing weather sets in.

In past years, however, when I cut the canes down each spring for primocane production only, the production was sparse. The primocanes start producing about the time summer gets hot and dry here, which tends to dry out and burn up the flowers and baby fruits. So we'll see.

We may need to start watering the berries, too. For the past three weeks, I've been on a daily watering schedule. We've had less than an inch of rain in the past few weeks. The soil has developed large cracks in some areas. Storms have passed us by several times, dropping less than a quarter inch, if anything, each time. We see cloudy skies (such as the top photo) but receive no benefit, except the drop in temperature.

Yesterday I saw the thermometer hit 102 F. Fortunately, we've done the typical Kansas summer thing and the 100-plus-degree temps hit one or two days, then the weather calms down to the low 90s high 80s for a while. Much better than last year, but we've still got the rest of July and August to get through.

Last year, I learned that a regular watering schedule gets the garden through some intense stuff, so I started watering as soon as the forecast indicated stretches of no rain. So things continue to grow, a bit behind schedule because of the weird weather in late spring, and devastation by cutworms and rabbits, but growing nonetheless. We are still harvesting broccoli and greens... and blackberries, of course. A number of the apple trees have fruit on them, as do the pears and plums. Even one peach tree bears a few fruit, which survive two freezes after flowering. So I'm not complaining.

But I'm still watching the skies, hoping for rain.

Posted by Sandra M. Siebert at 9:50 AM No comments:

I never thought that I'd commit myself to daily weeding of the grass.

But for the past three years (or is it four?) we've tried to establish a good cover of buffalo grass in certain areas. It has worked only partly. We do have nice patches of it, but that should be large areas of buffalo grass.

I've never paid much attention to "lawns," but I do recognize the need to have some kind of short ground cover in places where you want to entertain, where the grandkids can play, where I walk between house and garden and from garden to fruit trees. Mud and dust aren't that great, and short grass makes less cover for wildlife that you don't really want hanging out at the edge of the garden or real near the house. I don't mind the deer wandering through from time to time, but I don't want them bedding down at the edge of the garden.

So we mow a fairly good size area around the house and gardens. Regular short mowing over the years has caused the brome grass (not native, but a formerly planted hay crop) to weaken and thin. Herbaceous weeds (those that die to the ground each year) have moved in, which makes for not a terribly pleasant "lawn." So we thought we'd plant buffalo grass and let it take over, eventually.

﻿
That has been expensive. Buffalo grass seed is not cheap -- $15 a pound this last batch. We ignored the advice of experts to kill out the competition before we planted. Since buffalo grass is a "warm-season" grass, it greens up and starts growing later than many typical lawn grasses, so the cool season brome takes over and smothers it before it gets growing.

I do not like using chemical herbicides. I more than dislike it, I hate it. However, I resorted to spraying the brome and other cool season weeds this spring before the buffalo grass started growing. This summer, we will lay tarps or similar things over the areas we plan to seed next year (we're taking it a little at a time) to kill most stuff out before next spring. We didn't do that with the areas we planted this year, because they had some fairly decent bits and pieces of buffalo grass we didn't want to kill.

Now the crabgrass has taken off, and we are furiously digging it out to keep it from smothering the buffalo grass.

But, we are making progress.

Aided by early rains, the buffalo grass (in the sunnier areas) has sprouted pretty well. Numerous clumps from previous year's seedings are healthy and sending out above ground runners that take root.

We were warned to be patient, that you don't see much in the first year of your buffalo grass. And so we are seeing some reward from previous years' work and expense.

Why do we want buffalo grass this badly?
It is highly drought tolerant. When conditions are inhospitable, it simply goes dormant. By the end of last summer's heat and drought, the buffalo grass was brown, but it came back this spring when the rain came, unlike some other grasses.
Most important of all, buffalo grass is a short grass (native to the Midwest Plains) reaching only 6 to 8 inches in height. So it needs mowed just once a month, if that.

So now you want a buffalo grass lawn?
First, get rid of whatever is growing there, however you want to do it.
Plant as early as you can during its planting season (starts April 20 here in Northeast Kansas) to take advantage of the natural rainfall. If you don't get much rain, water twice a week until it starts growing well. But don't overwater; it didn't evolve in rainy areas, after all.
Keep down any competition that sprouts.
Don't plant it in shade.
Wait.
If you need to, seed into bare patches.
Wait. It'll happen.
Don't fertilize... much.

Of the dozen or so varieties available, we planted Texoka, because... that's what was available to us through the conservation district.