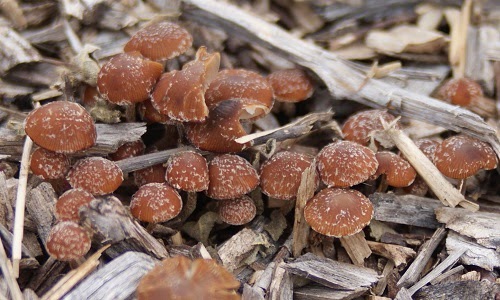 I am always amazed at the diversity in nature, from teensy frogs to giant thousands of years old sequoia trees. Some things get overlooked, however. Like the masses of fungal growth beneath our feet. Threads of fungal mycelia stretch through the soil, infiltrating dead wood and leaves, contributing to the process of decomposition. 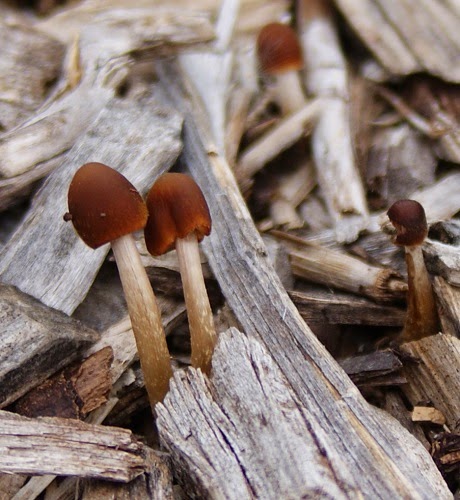 Some of those mycelia also attach themselves to plant roots, sharing nutrients and moisture as the plants share the food they manufacture from the sun. All in all, a relationship of mutual benefit.

The network of mycelia also serves as a plant Internet of sorts, allowing plants to communicate via chemical signals.

Mushrooms are the bits of the fungi that we see. These are only a tiny part of the fungal organism, however. Mushrooms are the fruiting bodies of the fungi, popping up through the soil when conditions are right. They mature and spread their spores. Every year, warmth and moisture invoke numerous mushrooms in the wood chips that cover my garden paths, as well as on the bales of straw and hay waiting to be spread as mulch. Every year some new type of mushroom sprouts. The forms seem neverending. 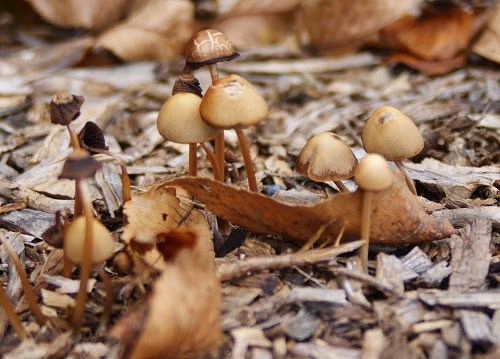 While I have always had a great respect for fungi, I got positively excited about them after listening to a couple of presentations at the Mother Earth News Fair back in October. The first presentation focused on growing mushrooms "off the grid." Just inoculate logs, wood chips, leaves or straw with the appropriate "spawn" and after a few months you have mushrooms of the edible kind. After that presentation, my husband went to one of the vendors and bought a bag of spawn for a kind of oyster mushroom. We now have several elm logs sitting on the north side of the house that should sprout oyster mushrooms in a year or so. 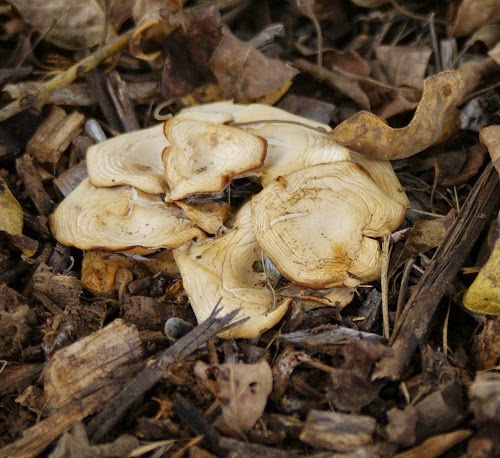 The presenter later also talked about the medicinal mushroom garden, which gave me an even deeper look into fungi. Some of these fungi may become the next superheroes of modern medicine. Because they must compete with other fungi, bacteria, viruses and who knows what else, fungi have evolved a veritable factory for producing the right substance needed to defeat the next competitor. Because their is no guarantee which organism they will encounter, fungi must be highly flexible. They can produce a chemical weapon to deal with whatever organism is in their way, be it a bacteria, virus or other fungi.

This ability may make them valuable in medicine, as they will be able to produce antimicrobial substances specific to whatever pathogen a person is suffering from, providing quicker, more effective treatments. Would we even need to identify what illness the person suffers from? I don't know.

The presenter, Tradd Cotter, not only grows edible and medicinal mushrooms, but has a sterile laboratory where he conducts research on the medicinal value of mushrooms. If you would like to learn more about mushrooms, edible and medicinal, visit the Web site of Cotter's mushroom "farm," Mushroom Mountain. Fascinate yourself with mushrooms.
Posted by Sandra M. Siebert at 7:33 PM No comments: