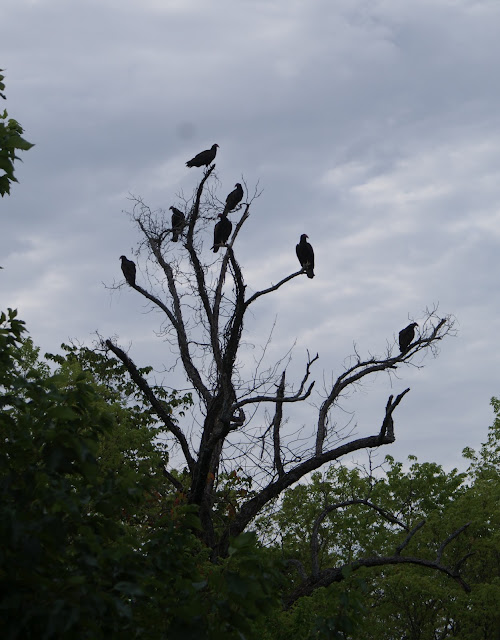 Seven vultures a sittin' in a tree...
Oh my goodness
Are they a lookin' at me?

I was just beginning to water the strawberries this morning when my husband called out...
"Come look at this dead tree!"
He had been on his way to water the fruit trees and had stopped the truck, before diving down the hill, to holler at me.
"Dead tree?" I wondered. "What dead tree?"
I knew he wouldn't call me if something interesting were not afoot. So I set down the bucket and headed to the driveway.
Oh. THAT dead tree. The tree was such a familiar part of the landscape, I'd forgotten about it. But it had a very picturesque group of vultures sitting in it. Reminded me of a movie, when the hero(ine) is in a dire situation. Or sort of like the haunted forest in "The Wizard of Oz."
An appropriate scene for this desert-like drought we're in.
Unusual though, as we usually see our vultures soaring and diving above us. Casting their shadows on our souls.
Posted by Sandra M. Siebert at 9:04 PM No comments:

The Sound of Distant Thunder.... 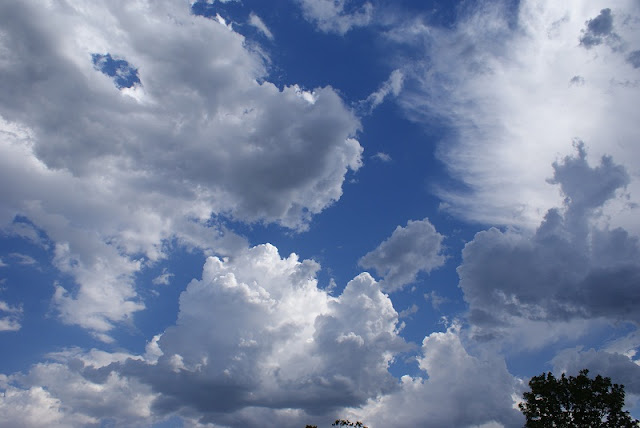 ....gets me giddy, excited.
Finally!
We are going to get some rain!

But it also makes me anxious...
Will it really rain here? Or will the storm split around us again?

The sound of rain falling all around... sigh of relief! Rain.
But how long will it rain? Will it even dampen the ground?

Rain last night... 15 hundredths of an inch. Not much.
Fifty to 75 more gallons in each rain tank. The morning cooler, cloudy, humid.

Whatever... I am taking a vacation to the South Pole tomorrow. ('Cause it's still summer at the North Pole.)
Posted by Sandra M. Siebert at 4:53 PM No comments: 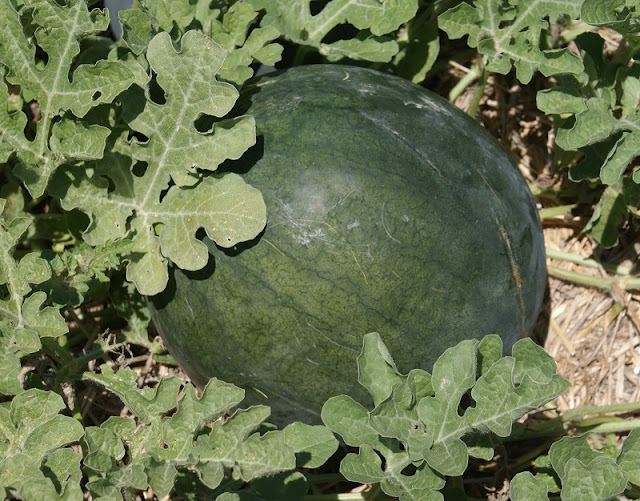 How do you tell when a watermelon is ripe? When it sounds hollow?
They all sound the same to me.
I usually look for a large "butter yellow" spot where the melon rests on the ground and wait for the tendril on the vine right next to the melon's stem to dry up.
But the yellow spot on this beauty has gotten smaller, and is almost gone. The tendril is finally beginning to dry.

I cut one the other day that had a large yellow spot on the bottom, but the tendril was green. The granddaughters were here and I was hoping to give them a treat. But nooooo... The inside was completely green.
Sigh.

Looking for information on how to tell when Blacktail Mountain melon is ripe. "Look for the yellow spot on the bottom. Wait for the tendril to become completely dry... then wait a few days more."

Patience is a Virtue.
But it's hard,
especially when it comes to waiting for watermelons.
Posted by Sandra M. Siebert at 7:47 PM 2 comments:

Raindrops Falling on the Laundry

The laundry out on the line is getting wetter by the minute.

That means it is raining. It rained most of the morning and at nearly 2 p.m. may be just about to end. I don't know. Looking at the radar all morning I thought it would be done by noon.

Yay! Giggle. Dancing in the rain.

It has been a light rain and won't amount to much. I will be back at the watering tomorrow, most likely, especially since the high will be at or nearly 100 every day for the next week. But right now, the temperature is 69 degrees. It has not been above 73, so far (although the forecast high is in the mid-90s).

Once the rain stops, the clouds will clear and it will be hot -- and most definitely quite humid -- and the laundry will dry. But what a wonderful vacation from July. Damp and cool for half a day. I felt much more optimistic about a fall garden as I planted broccoli seeds in little pots this morning.

Yes, it can rain in Kansas. One day it will be enough.

Posted by Sandra M. Siebert at 1:51 PM No comments: 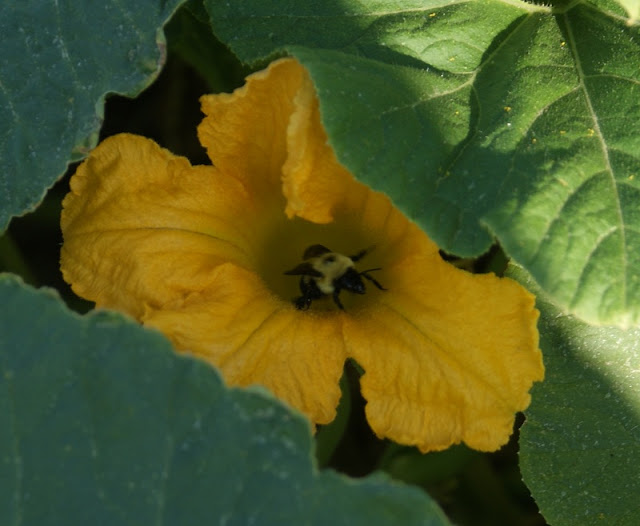 Sort of, anyway. It is 94 degrees at this moment, a full 10 degrees (or more) cooler than it was at 2:15 p.m. last Tuesday. It attempted to rain -- twice -- in the past couple of days, but did nothing more than dampen the surface. Would so love to see a good rain filling in the the giant cracks in the ground. A friend who lives just 20 miles away had a full inch of rain on Sunday. But I won't pout. Our turn is coming.

At least it is much cooler. It was positively lovely this morning. I can hear the land sighing with relief.

The bumblebees are busy at the squash blossoms (above). I have quit watering the squash, since our rainwater supply is so low and they are dispensible, but they keep going. The squash become quite wilted in the afternoon heat, but look perky in the cool of the morning. Everything is suffering, but some things just keep on going in spite of the dry conditions.

Plant life is so absolutely amazing.
Posted by Sandra M. Siebert at 2:21 PM No comments:

The Heat Drags On... 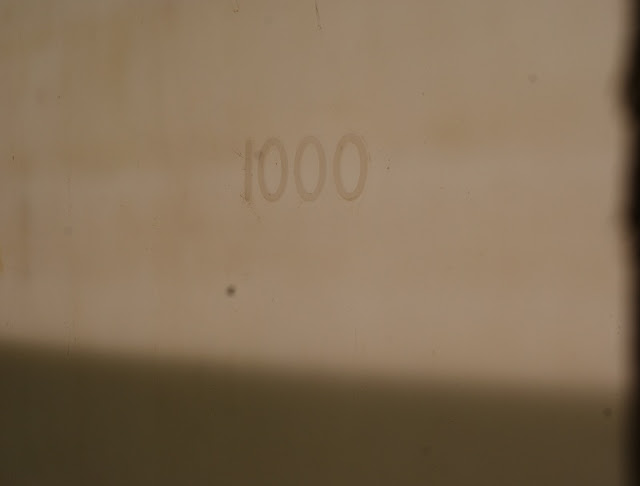 And the Water Goes Down...
Our most used rain water tank was at this level in the middle of last week. About 950 gallons left from the nearly 1,500 gallons full.
﻿
After watering stuff nearly every day since, and watering some of the trees today, it is down to about 625 gallons. The other tank, which still had 1,275 gallons yesterday now has less than 800. A small tank is sitting in the back of our pickup with more than 200 gallons in it so we can water trees and berries at the bottom of the hill. It will get filled a couple more times before all of the fruit trees are watered. Then our rain water supply will be desperately low.
Yes, we have rural water, but we have tried to avoid paying for water for the garden.

No rain is in sight for at least another week, with highs continuing to hit 100. So it is time to triage.
It's also time to use any drips and drops we can salvage. We already catch dishwater and handwashing water in the kitchen sink in tubs that are emptied into buckets or dumped immediately onto thirsty plants. Yesterday I put buckets in the shower to catch what we can. If only our drain pipes were not in concrete floors, we could rig up something to capture our gray water (all waste water that does not come from a toilet).
Ah well.
I promised to post photos of our rain water catchment system, and so here they are. We purchased two heavy plastic 1,500-gallon tanks and set them on 2-foot tall platforms (frames made with 2x6 boards, filled with gravel). Wood fencing hides the tanks (makes 'em purdy) as well as protects them somewhat from the sun.


At some point we plan to cover the tops of the tanks with heavy canvas tarps to further block the sun and prevent UV deterioration of the plastic, as well as keep down the algae in the water.
My husband cut a hole in the side of each tank near the top and screwed in some 6-inch plastic pipe as an overflow. Flexible plastic pipe takes it into an underground one that carries the water away from the house. He also cut a hole in the lid of each tank and attached more flexible pipe that comes from the roof gutter. The top opening, when the lid is off, is just large enough for me to fit through, so once a year I get into the empty tanks to clean them.
The tanks already had an opening in the bottom from which liquids inside can be drained. Plumbing materials were used to reduce that opening down to fit the end of a garden hose. Two valves provide different shut-off points. One of the "pickets" is on hinges so we can reach inside to turn the inner shut-off and to check the water level.


The tanks catch water from the west side of our roof, which is a long, straight metal roof. Just half an inch of rain will put about 300 gallons or more in each tank. This has been an invaluable set up this year. The first year after it was installed, it rained enough that I don't think I ever used it and we wondered if we'd wasted our money. But last year and this year they have saved the garden and prevented big water bills.

The only issue with this system is water pressure. Even in the south garden, which is at a level well below that of the house, the gravity pressure is not enough to make a soaker hose work. The north garden starts lower than the house, but slopes upward. By the time the hose end is at the far northeast edge, water comes out slowly, even when the tank is full. Right now, I cannot get the water to even trickle out at that point and must bring my hose and bucket a few feet to the west, at a spot that is still low enough to get water. So I have to carry water a bit further. As the water level goes down further, I may have to carry water from the garden edge closest to the tank, at the lowest elevation, to get the water to run.

I hope we get rain before then.
Posted by Sandra M. Siebert at 8:15 PM 2 comments: 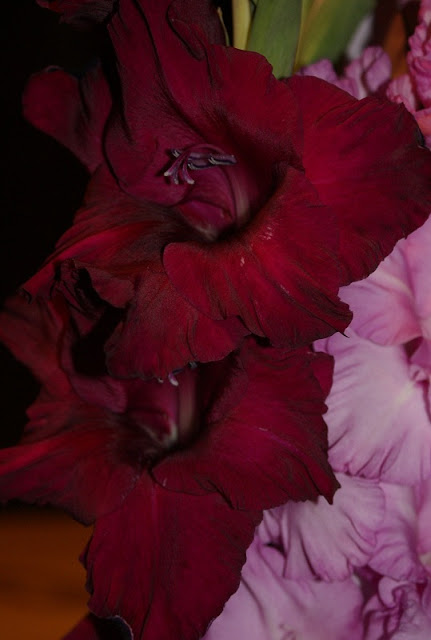 Another week begins: Mid-afternoon and 100 degrees, down from 103.

And no rain last night in spite of all the ruckus.
The storm ripped in two as it reached us, part going south, part going north.

Ah well. Another week of watering. We still have a total of 2,000 gallons in our tanks, so we can handle another week. However, this week I will fill the small tank that fits in the back of the pickup and start watering fruit trees.

That will diminish the water supply much more rapidly.
The gladiolous continue to bloom. Today I cut three stalks that included two new colors: this lovely magenta and demure pink. The cutting garden isn't as full as I'd like, but we have zinnias and gladiolous. 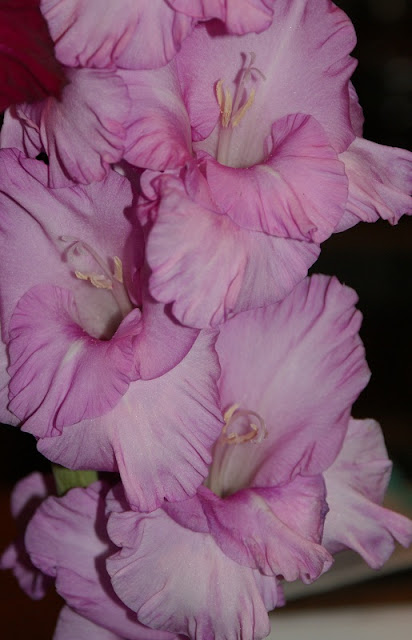 A small number of the sunflowers there also managed to make it past seedlinghood and are blooming. I hate to cut them, though, as today I saw a bumblebee on one, its pollen bags stuffed with sunflower pollen.

We started feeding our honey bees again today, because the natural nectar supply appears to be thin. We planted buckwheat and some other things to provide sustenance for them, but with the dry weather got little germination.

We've just got to hold on until it starts raining again.
Posted by Sandra M. Siebert at 3:09 PM No comments: