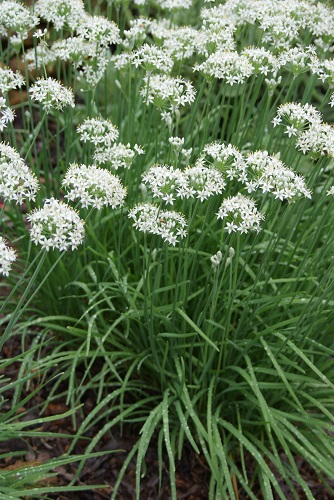 Garlic chives in full bloom produce an arresting site. Shortly before this photo was taken a tall Lady in Red salvia sported tall spikes of scarlet blossoms in front of this clump of garlic chives; scarlet and bright white together made a striking picture -- unfortunately I didn't get around to taking a photo until the red blossoms had dropped.

Garlic chives bloom relatively briefly in late summer -- for about two weeks or so. During that time the clump of garlic chives becomes a popular dining spot for all kinds of nectar-loving creatures. When the blossoms fade, they are replaced by little green capsules, that in time dry and spit out a black seed each. Dozens and dozens of seeds per clump of chives. Dozens and dozens of viable seed ready to turn into more garlic chives. This can be considered a good thing, or an annoyance. It all depends on where the garlic chives grow. These in my "ornamental" flower beds prove to be an annoyance when they start to spread. So before the little white flowers turn to seed I've got to cut off all the flower stalks.

However, I intentionally scattered seed around some fruit trees, where they've created a lovely spattering of starry flowers. Some friends of mine who live in the woods have a large patch of garlic chives (which do taste and smell like mild garlic) along the narrow path to their house. It is quite lovely.

These plants are hardy, suffering through heat and drought with no complaints. And -- I don't know if it's proper to use this term in relation to a non-critter -- fecund, with all of these seeds ready to make babies. I did not realize how persistent these gems are until I recently went to my parents' home for a family reunion. Around the southwest corner of the house, where I planted my first herb garden, garlic chives bloomed. Some of them had obviously been taken down with a string trimmer or mower, but numerous small clumps bloomed. I'm sure my mom didn't plant garlic chives, so the only explanation was that they were remainders from the herb garden I planted as a 16-year-old. Decades have passed since then.

As I've lately pondered about the impermanence of life (as I often do when summer moves into autumn, trees lose leaves, etc. etc.) I came up against something that wasn't quite so fleeting. The original garlic chive plant that I set into the ground decades (I mean decades) ago no longer lives, but its progeny do. The herb garden planted when I was a fledgeling herbalist/herb grower still survives in some form.

I wonder, will the offspring of these chive blossoms flower beneath the red cedar trees that overtake this land decades from now?

Every morning I take my daily cup of tea or coffee onto the screened in porch where I meditate on the landscape before me. These days the sumac at the edge of the woods has taken on a bit of red. In a few weeks all of the sumac foliage will be brilliantly scarlet.

Trees still adorned in green rise behind the sumac; I think I see a bit of color in the green canopy, however. In front of the sumac the black raspberries lean on the trellis and stretch their canes down, hoping to touch tip to ground and take root (something I keep trying to discourage).

Long beans cover a trellis at the front of the vegetable beds on this side of the house. One end of that trellis is studded with rich purple morning glories -- Grandpa Ott's morning glories that have gone feral. They climb the pallets and fencing that enclose my compost area, so their seed winds up in the compost and morning glories spring up everywhere. I weed out some, let some grow, and miss some when I'm weeding leaving glorious weeds.

While they grow all summer and start blooming about mid-summer, they are at their most glorious in late summer and early autumn. At some point I must have planted morning glories other than Grandpa Ott's because this lovely sky blue glory has covered the wire cage that supposedly supports a purple tomatillo. That's ok, because the tomatillo plant didn't fare so well. At least it's been replaced by something pretty.

A trellis in front of my house boasts a differently colored glory, an incandescent pink. While the blue glories might be descendants of a variety appropriately named "Heavenly Blue," I have no idea of the variety name of the pink, perhaps I'll call it "Stunning Pink."

Whatever their variety names, morning glories (genus name Ipomoea) belong to the Convolvulacea family. A black sheep of that family is the nefarious field bindweed, as well as the hedge bindweed, two small vines with pretty trumpet flowers (just smaller versions of morning glory flowers). Unlike morning glories, the bindweeds are perennial and extremely difficult to eradicate -- one reason they are designated a noxious weed.

Morning glories also are close relations of the sweet potato (Ipomoea batatas), which produce a much more robust vine. And, yes, the vines that grow from our vegetable sweet potato roots also bloom, although not nearly as profusely as the morning glory vines. The ornamental sweet potato vines are possibly just varieties of this vegetable, but they are not tasty in any way, and I've never seen them flower.

To enjoy the morning glory blossoms I must get into the garden during the first part of the morning. By late morning they are closed and withering (except on cloudy days). Glorious as they are, their time is brief, impermanent.

And so they remind me, that while my "blossoming" is much longer than theirs, it also is impermanent. Everything I labor for on this land is impermanent. Once my hand no longer touches this place, everything will change.

At some point, I presume, human tending of this land will cease and Nature will do what she sees fit. Most likely the area will be covered by woody species -- first the sumac and flowering dogwood, an occasional hedge, elm or redbud, all of which will eventually be engulfed by the red cedars. Beneath it all, sleep the roots of an old prairie that began its days when the glacier retreated. As massive and powerful as that glacier was, shaping the hills and leaving behind gravel and large stones from places far to the north, it also was impermanent. Deeper down, the limestone bedrock tells the tale of an ancient seabed, now permanent in its impermanence. Beneath that, I don't know -- tales a billion years old. None of them permanent, yet the memory of all of these lies embedded in this land.

My tiny little piece of time here will go unnoticed in the sea of time. Like the morning glory blossoms, it will be brief. However, they flowers remind me to do my best to make it glorious.
Posted by Sandra M. Siebert at 7:37 PM No comments: