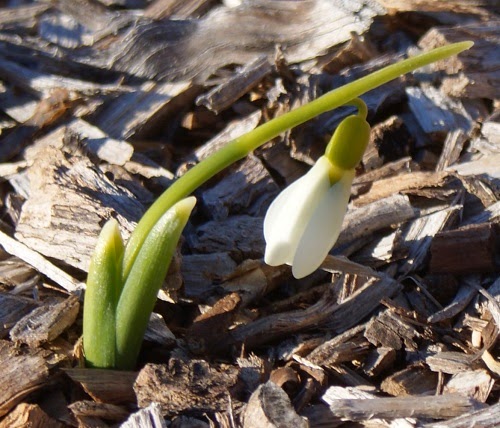 I keep checking the weather forecast, hoping it will change.

It does... but for the worst. A few days ago, the lowest low for early next week was 5 degrees F.
Now the lowest low is 1 below zero degrees F, with highs in the low to mid-teens. And before that, we'll face rain, freezing drizzle, sleet and snow.

Every time I look at the forecast, I get depressed.

Yet I keep checking.
Why do I torture myself like this?

And so, today, I must trek to the Post Office because Peaceful Valley thought it would be a good idea to send my trees now. Why don't they give me a way to request a "don't ship before this" date? Other nurseries do, and my other order of trees won't arrive before March 15, which still might be too early this year.

So I check the weather forecast again.
Depressing how I torture myself, isn't it.

On the bright side, this is what my lonely little snowdrop, my ferocious snow-piercer, looks like today. It's head bent against the cold, but the bud beginning to open.
Brave thing.

Rain, sleet, then snow
and the wind does blow.
Wish this winter would
just up and go.

For a moment we had spring,
Heard all the birdies sing.
Now I see winter is
back in the swing.

So tired of it.
So here's a picture
of my kitty. 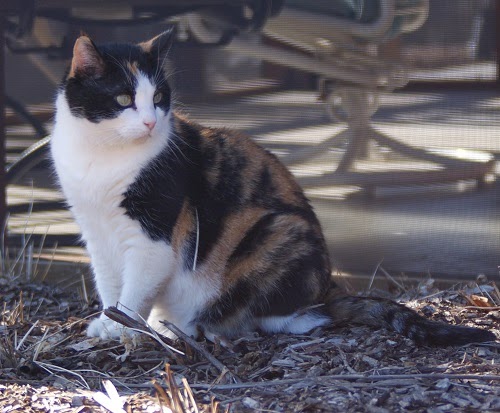 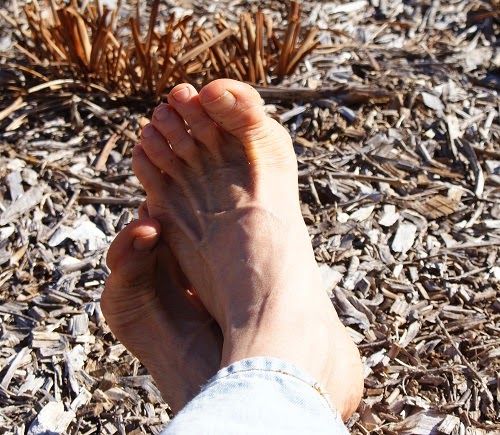 Today was barefoot weather!
It hit 70 degrees F., so I sat on a rock in the sun, eating some frozen chocolate-coconut custard, without my shoes. 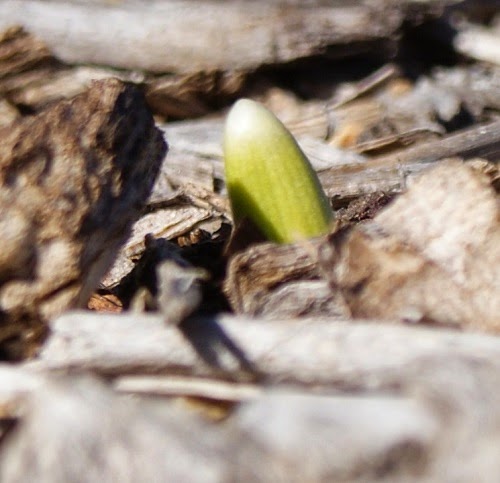 Most of the snow has melted and this little tip of a snowdrop is peeking out. Thunderstorms tomorrow night -- feels like spring!

The bees have been out and about yesterday and today, buzzing around like they are on a mission, but aren't quite sure what that mission is. Perhaps they're just crazy from having to hold it for so long (they don't poop until it's warm enough that they can leave the hive and survive). Maybe they're just a bit senile, since winter bees live for a few months, while summer bees live just a few weeks. So these girls are really old as honey bees go.

I'm still not sure that explains why they were hanging out around the bird feeders. They actually dug into the sunflower chips, tossing the chips to the ground as they dug, like cats in a litter box. I understand why they might hang out on the orange peels and other fruit parings in the compost heap, but what can they want from digging into sunflower chips? Just another mysterious I saved one little bee from drowning in a puddle of water on one of the stones lining the bottom edge of our flower garden terraces. Anyway, I think I saved her. She stumbled around groggily for a while as I watched, but I didn't see her fly. I caught a shot of a more prudent honey bee getting a sip at the edge of one of the puddles. Some bees don't seem to know that they can't just dive in. 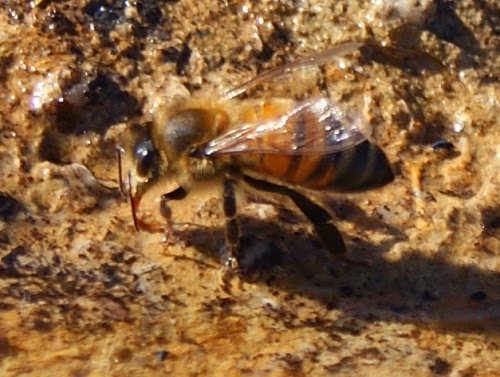 Winter makes a comeback this weekend, and next week we'll see high temperatures just above freezing for a few days, then it looks like perhaps another slow warm-up. By the end of next week, it will be March. Before I know it, the planting season will hit fast and furious and I will feel like I am falling behind schedule until the heat hits in July. 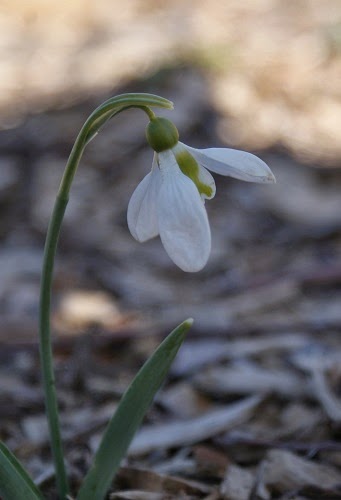 Eight degrees Fahrenheit at the moment, with no hope of it getting much higher today. Fifteen degrees will be the high, according to the National Weather Service, with another shallow dip below zero tonight.

For the past few days I have gone to the NWS site for relief from the cold (don't really mind the snow that much). According to NWS, the temperature will finally break the freezing mark on Wednesday, for the first time in what seems like forever, but probably isn't as long as it seems. By Saturday and Sunday, the high will almost make it to 50 degrees F.

We'll all be out dancing in our bathing suits, throwing slush balls and finding mud holes in those temperatures, after this long, drawn out much-too-cold-for-February spell. I look at the forecast and feel a clamp release from my heart and a weight lift from my shoulders. Yes yes yes. Perhaps spring will come again.

The broccoli and kale seeds I planted in pots last week have little green sprouts and this week, I star the eggplant and peppers. And the cardinal count keeps going up. Hubby counted 12 males yesterday. No window will be safe come nesting season. 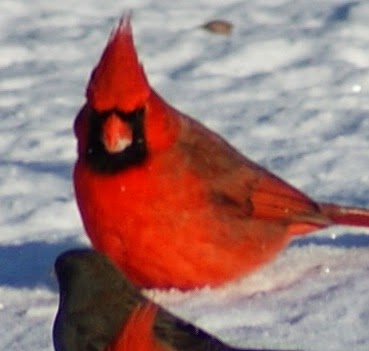 Once the snow melts, I'll be out looking for bits of green in the gardens. Perhaps it won't be long and I will see a snowdrop, such as the one picture above from last spring. Then the flowering season begins.

You can put a roadblock in front of spring, but you can't stop it.
Posted by Sandra M. Siebert at 7:24 AM No comments: 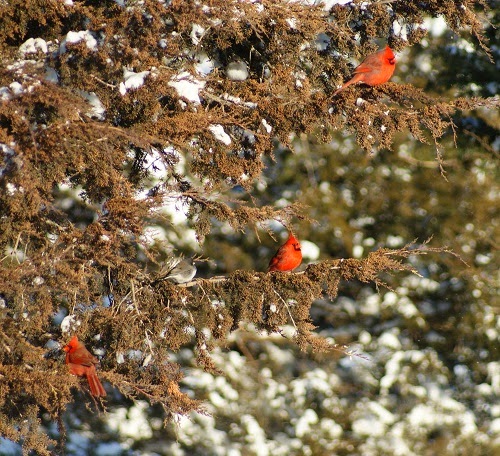 With all of the cardinals hanging out by the feeders during these past few bitter days, we realize that rearview mirrors on any vehicles parked at our place are in danger. All visitors will drive away with beak grease on all exterior mirrors and bird poop on the car below the mirror. 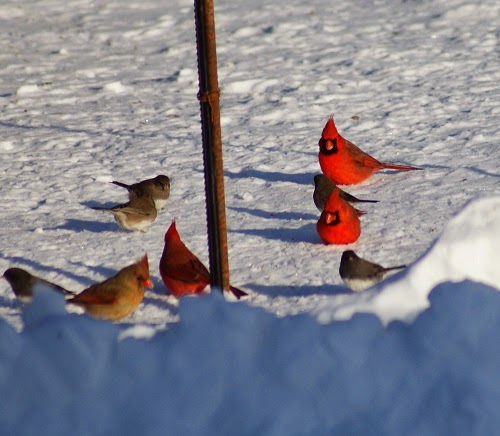 These red birds viciously attack their reflections... repeatedly. At least they have largely left the windows on the house alone in the last couple of summers, but the small window in the sauna got attacked. We counted 10 cardinals by the feeders the other day... that was just the bright red males. The less brightly colored females are there in abundance, as well.

We received about 12 inches of snow on Tuesday, which was absolutely gorgeous. I went walking in it for a short while... so, so beautiful! The snow was followed by bitter cold, but not quite as cold as predicted. Minus 5 degrees F the other morning instead of the minus 8 or 9 that had been forecast. We are quite grateful not to have had some of the more extreme weather that other areas have experienced.

But we are usually past the single digit and below zero temperatures by February, so I wonder if spring planting will be delayed. I worry about our bees, too, wondering if they have enough honey to get them through this cold. I did not expect such extended periods of cold, or I would have planned better, providing supplemental feeding early in the season so they wouldn't use up their honey stores. I don't like using sugar water, but it's better than letting them starve. 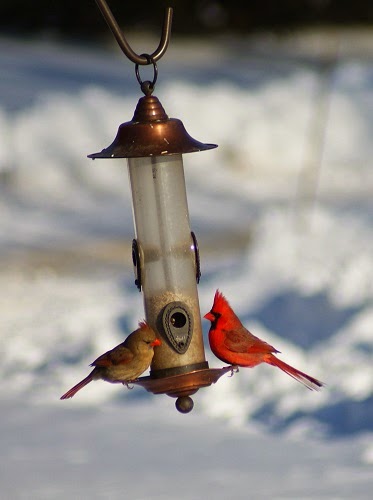 I have neglected this blog, telling the readers of my newspaper column that they can find more info on things here, yet failing to provide more information. One of those topics is growing jujube fruit trees. Early last fall, a friend of ours gave us a few jujube fruit from his own tree. They were quite tasty. A little later, another friend brought us dried jujubes from New Mexico. Yum yum! So we are convinced that jujubes must be grown here.

They like hot summers and can tolerate quite cold winters, even though they originate from somewhat tropical climates. You want to be sure and let the fruit fully ripen on the tree, as they don't ripen after harvest. Supposedly, you also can let them dry on the tree -- but my guess is that the critters around here wouldn't let us have any if we tried that. So we'll dry them in our solar dryer. Here are a couple of links to jujube trees and cultivation information. Here in Kansas, we want to plant the regular jujube, Ziziphus jujube, not the Indian jujube, which is less cold tolerant. I had considered planting these fruit trees in the past, but balked at it because they are a bit more expensive than other fruit trees. But they are rarely bothered by pests and disease, so I will bite the bullet and get a couple this year.

﻿ Another topic I promised more information on was seedless watermelons. I am happy to spit out or even swallow the seeds, but my husband wants seedless. So I will actually grow several varieties of watermelon this year, including the seeded Black Tail Mountain, an orange-fleshed variety and one seedless variety. Have you ever wondered how you can plant SEEDS for a SEEDLESS watermelon?

Getting seedless watermelons is a process. First you plant a regular watermelon, then treat the seed or plant, I'm not sure which, with a special chemical that gives you a plant with double the normal number of chromosome sets (normal is two, so this gives them four sets), then you cross that with a regular watermelon variety and the result is a plant with three sets of chromosomes and fruit with no seeds. Now this final plant has sterile pollen, so you must plant another regular watermelon with it in order to get fruit set. Seedless watermelon seeds germinate less readily than regular ones, so they must be started in pots indoors, then babied until they get established. Because they don't put energy into making seeds, the vines are more vigorous. We'll see how this goes

I will let you know how well or if our bees survive this winter, and keep you updated on the progress of the jujube trees and seedless watermelon project. Right now, though, I am just looking forward to the end of winter, to the moment when we clean out the stove for the last time and put away the wood rack. By the middle of next week, we should see temperatures in the 30s (Fahrenheit). Break out the bathing suits!