The snow has disappeared -- except for a tiny patch where we piled snow scooped from in front of our garage.

The snow is gone, as are single digit temperatures (please, please, please). The winter aconite survived the minus 3 degrees Fahrenheit while blanketed in snow.

The snow is gone, but the yellow flowers remain, looking much like sunshine bubbling out of the earth. A quick look today revealed the yellowed tips of daffodil blades, spiky crocus leaves, and the tips of surprise lily leaves.

Yesterday and today I walked barefoot in the garden. Where the sun shone, the ground was warm enough. But ice remains in the ground where shade lies all day. It will be gone soon, though, soon.

I've been able to set my baby cabbages, broccoli, and other spring vegetable transplants on the front porch to harden off. With good fortune we'll have a run of dry sunny weather before the end of March so I can set them in the ground. A few days ago I started peppers and eggplants. Sometime this week I'll start tomatoes. Maybe I'll even plant peas in the garden later this week when it clears off, briefly.

We've started buying our wood for next winter. With luck, the wood we bought last year will last through the cold weather this spring.

It is spring. It feels like spring. The birds say it's spring, and the calendar says spring begins next week. I'll take it. Finally. I hope.
Posted by Sandra M. Siebert at 8:35 PM No comments:

I grew up on the eastern edge of the Flint Hills, probably the largest expanse of virgin tallgrass prairie left in existence. The prairie is home to me, it's part of who I am. Even though I don't live in the midst of tallgrass prairie now, restoring and preserving a tiny piece of prairie near my home feels essential.

At one time, before European settlers began plowing, the central portion of North America, up into Canada, was covered in tallgrass prairie, with medium and shortgrass prairies covering dryer parts of the region. Little of that virgin prairie remains. In some states, less than 5 percent of the original prairie still stands. Kansas, however, has a large portion of the remaining prairie.

Most likely, what saved much of this tallgrass prairie is the terrain. Too rocky and hilly to make good cropland, it was, and still is, ideal for pasturing livestock. Large herds of grazing animals -- bison, elk, deer, and others -- served as a major force in preventing the prairies from being overtaken by woody plants and turning into woodlands. Along with the grazers, periodic fires pushed out the woody plants. At some point, the indigenous people of this land learned to use fire to their advantage, as the succulent growth that followed a prairie fire drew these grazers that provided food, skins, bones for tools, and other resources. And the excrement and urine of these animals fed the prairie plants, creating a lush grassland.

The prairies aren't just grasses, though. They also contain many, many species of forbs, better known to you as "wildflowers," that fed adult and larval forms of the thousands of species of native insects. Many factors, including the loss of habitats containing native plant species, have significantly reduced the number of native insect populations.

The loss of insect populations is quite obvious to me. At one time, when I went driving at night the front end of my car would become crusted with the smashed corpses of insects that jumped or flew into my path. I no longer need to scrub that crust off the car, regardless of how often I drive at night.

But hold on a minute. Insects are the foundation of any ecosystem, as they are at the bottom of the food chain. A dramatic drop in the insect population creates a great loss in populations of creatures that depend upon them for sustenance -- birds, frogs, toads, other amphibians and small reptiles, and birds. Oh. Did I say "birds" twice?

Many people might not care much for amphibians and reptiles (and many do), but birds, now... that's a different story. Why else would people spend so much time and money on bird feeders and bird food? Those sunflower seeds you feed them certainly helps survival, especially in hard winters, but birds need insects. That's their source of protein for their young. They don't feed chicks sunflower seeds, they feed them insects.

"Most caterpillars don't turn into butterflies and moths," said Betsy Betros, entomologist, "they turn into birds."

A pair of mated chickadees must hunt down 10,000 caterpillars in order to raise one clutch of chicks, Betros said during a recent panel discussion on "Native Plants for a Resilient Kansas." A more conservative estimate by author Douglas Tallamy (who was not on the recent panel), who wrote "Bringing Nature Home," was 6,000 to 9,000 caterpillars. That's still a lot of caterpillars to raise five to 10 chicks. And black-capped chickadees are tiny birds. Imagine how many bugs it takes to raise a clutch of larger birds.

The value of these birds goes beyond delighting us with their antics at feeders and their love songs. They also serve as food for larger birds -- owls, hawks, eagles -- as well as some mammals. All creatures eventually become food for something, be it vultures and other scavengers, or microorganisms. A significant decrease in populations of critters at the bottom of the food chain means decreasing numbers of critters all the way up the food chain. Except for humans. It seems we keep reproducing and growing in numbers in spite of all the signs that we should stop.

And then there are the native pollinators -- mostly insects here -- who are responsible for keeping the wildflower and food populations going. Bees, not just honeybees (which are not native here), are the most critical pollinators. With dire predictions of the potential collapse of the beautiful Monarch butterfly, everyone is planting milkweeds. But we need to do more to sustain all other native pollinators. While some of the non-native flowering plants we put in our garden will provide food for some of our native pollinators, our native plants attract a much larger variety of these insects.

Many insects -- particularly moths and butterflies -- use only one genera of plants as food for their caterpillars. For example, the Monarch's preference is for milkweed species. My common milkweed plants get eaten to the bone by larvae of the Monarch butterfly and the Tufted Tiger Moth. But that's the point. We need nurseries for the young, not just nectar and pollen sources. Native pollinating insect adults also seem to prefer pollen and nectar from native plants.

Plant native flowers. Save the world. Or at least save the insects... which amounts to the same thing. STOP USING INSECTICIDES. Provide habitat. Many of our native bees nest deep in the soil, an adaptation to survive prairie fires. Support organizations, such as the Kaw Valley Native Plant Coalition, and Grassland Heritage Foundation, and others that work to preserve and restore native prairies. They and others also are great sources of information on what natives to grow.

To learn more about various insects, check out Bug Guide by Iowa State University. This page is all about dragonflies and their relatives. Look for Betros's new book, "A Photographic Field Guide to the Butterflies in the Kansas City Regions." The more you know about insects, the more you'll love them.

Posted by Sandra M. Siebert at 1:30 AM No comments:

Beneath the Snow... Spring 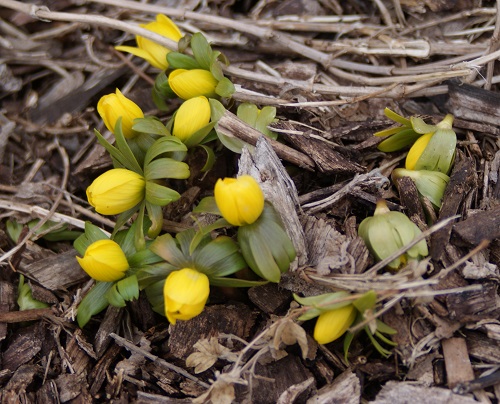 A week ago I found these beauties blooming in the garden.

Winter aconite is always one of the first things to show up in late winter/early spring. During a winter when it seems that spring is never going to come, I was delighted to find these unopened buds. I wondered how they would fare with the bitter cold that was in the forecast.

This morning the digital readout said minus 3 -- that's Fahrenheit. Minus 3 on March 4; must be a record.

Snow covers the winter aconite now, so it should be safe from the deep cold. Snow creates great insulation against anything colder than the freezing point. So I'm pretty sure these yellow beings have survived. I don't know if they were fully opened before the snow fell, most likely.

I'm anxious to see the snow melt and find out how these lovelies fared.

I am ready for spring.

Spring.
Posted by Sandra M. Siebert at 8:57 AM No comments: