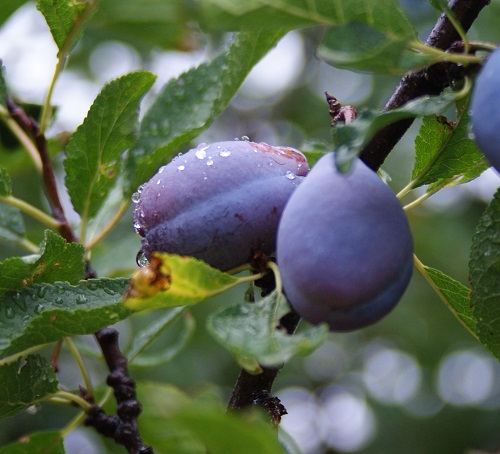 Raindrops on the plums.

These guys are ready to pick. They're not fully ripe, but in year's past I've learned that it might be a mistake to leave them on the tree too long. So I'll pick them and leave them out to ripen. Most of them will probably be dried. They are prune plums, after all.

Back to the raindrops... It's only been a little more than a week since our last rainfall, but two rains then totalled little more than a third of an inch. In all of July we received slightly more than an inch. And it's been hot. The water in my catchment tanks was getting low. As I started my weekly watering schedule yesterday I denied some plants their usual dose.

Hoping the rain forecast came true, I held off watering the asparagus and sweet potatoes, knowing they could withstand some dryness better than many other things in the garden. But the most critical decision was to hold off watering some of the tomatoes. It's time for triage.

I don't expect this to be a drought-breaker. We got just 0.61 of an inch this morning. It's a relief. It means I don't have to water as much today. But it's not a drought-breaker. The 10-day forecast calls for another good chance of rain in another week. However, too often we've missed out when the forecast was 80 percent chance, or just received a small dose. And often I've gotten excited about a rain chance just a few days away, only to watch the percent chance dwindle as the day nears. So this lets me kick back a little, puts more water in my storage tanks, but it's no drought-breaker.

So, yesterday, I decided I could let go of most of the Black Plum tomatoes. As always happens with this variety, they've started looking pitiful before all of the other tomato plants. Their leaves are turning brown, and some of the stems are dying. It does this every year at this time. This variety is so productive, however, that I've gotten about as many as I can stand by now. Quite a few pint jars of roasted Black Plum tomatoes have been stashed in the freezer for later. I'm OK with letting them go. I've earmarked a couple of plants for saving -- the best looking ones -- and next week I'll start taking down the rest. I actually like being forced to remove some of the tomato plants early. It saves me time later when cold weather kills the rest.

I've already removed one patch of summer squash. They were very happy plants, in spite of the fact that the squash bugs were multiplying. They sprawled into the paths on both sides of their bed, in spite of my constant moving them aside, making travel down the paths difficult. Most important, though, was that I had a difficult time dealing with all the squash. Four more cluster of squash plants grow in another area and are hitting their peak production. I just couldn't anymore. The other day we invited a neighbor to take as much of it as he wanted. I saw him carry several armloads of squash to his truck. Still... more squash. The next day another neighbor picked a large basket full of squash.

Still, more squash. Yesterday I picked another large basket full of somewhat oversized squash and some smaller ones. Yesterday I steamed a bunch of squash that had been in the fridge for several days, and some of yesterday's smaller pickings. A small boxful of  will be shared with people at my husband's clinic. Today I sliced several of them to dry into chips. And I've still got more to deal with. Some (the round lemon squash) will be sliced and dried as chips; the long, green and yellow Zephyrs will become lasagna noodles. Bags of roasted and steamed squash, as well as squash grated for winter batches of "zucchini" bread, sit in my freezer already and I expect to add even more before all is said and done.

When a friend on social media asked people to describe the past few weeks of this summer in two words most people replied with the obvious, "Too Hot," "Too Dry." My response was, "Mucho Squash," as that has been the dominant theme here, other than the weather.

And cucumbers. Lots of cucumbers. What do you do with all those cucumbers? We eat them almost every meal -- slices, chopped, and made into fatoush (a Mediterranean salad that features cukes). We use them in infused water with lime and mint. I've fermented cucumber dill pickles. I'm even toying with the idea of using them in stir fry, as suggested by a few other bloggers. But I took out one of my patches of cucumbers. The earliest one that was looking a bit rough.

Now that it's time to plant the fall garden, reducing the watering seems not just appropriate, but imperative. Anything that's either overproducing or not pulling its weight can go. I'll let the Black Plums go for a while, taking only what water falls from the sky. Then it's "off with their heads." For weeks I contemplated pulling out the purple podded pole beans. Then I saw tiny pods on the vines. Yesterday I picked quite a few. So even though they look really, really rough, they can stay for a while. Until I determine that they're no longer worth the water.

Far from being a sad time, I feel rather excited about clearing some of the planting areas. I love the look of a recently cleared bed laid with fresh hay. Like spring cleaning, only in summer.


Many gardeners I know have been talking about Japanese beetles this summer. They've hit some of us in plague-like numbers. They finally worked their way to Kansas (after accidentally being introduced to the U.S. in the early 1900s) in recent years and their numbers are on the rise.

In the last few years I've seen a Japanese beetle here and there, but not so many I became concerned. Last year I heard about them attacking an apple tree and some other things at the Medicinal Plant Research Garden near Lawrence. But I wasn't worried.

This year they descended on Spirit Bird Farm in force, first becoming noticeable on the ripening peaches. This was a blessing in disguise. Because the beetles threatened to consume all of the peaches, I climbed into the trees to salvage what I could, as well as knock as many beetles as possible into buckets of soapy water (which quickly drowns them). This meant I got the peaches before the squirrels did (mostly). My harvest was much larger than last year's.Two quarts of diced peaches in the freezer may not sound like much, but it's more than double what I put away last year. Plus I've eaten fresh peaches and baked a pint-sized batch of peaches with ghee (clarified butter) and powdered vanilla. Extraordinary.

Then I found hordes of the shiny green beetles on the grape leaves, the okra, a tall wildflower called gaura, and some of the apple trees. They were not only eating the apple leaves but some of the fruit on the summer apple. These little beetles can't cut through an apple skin on their own, from my understanding, but took advantage of breaks in the skin made by birds or other critters. Then they converged on the vulnerable apple and ate a cavern into it. They've eaten on the Souvenir de la Malmaison rose a little, but not too badly, even though roses are one of their favorite foods.

So for the past month I've been focused on getting rid of Japanese beetles. Hand picking, insecticidal soap and neem oil, possibly pyrethrum are the organic methods. But they're like the rabbits -- kill a few hundred and there are thousands to take their place. Fortunately, according to a Missouri Conservation publication, the beetles usually disappear around mid-August.

Or is it fortunate?

After seeing the quantities of beetles I collected in the soapy water, my husband asked an inevitable question (inevitable in our household, anyway), "Are Japanese beetles edible?"

I wrote about eating insects last year, when we started looking at ways to diversify our diet and started munching on crickets and especially grasshoppers. When cooked, dried and ground, grasshoppers have a flavor somewhat like chili powder without the heat.

Anyway, the answer is, yes, Japanese beetles are edible. Rinse and cook them first, of course. But the answer to "How do we control Japanese beetles?" might just turn out to be "Eat them." So far the main info we've found is to confirm that the beetles are edible. We haven't found recipes, but it doesn't take a lot of imagination to figure out how to cook them, especially after our first foray into insect cuisine. Saute them, bake them, boil them. Then throw them into whatever dish strikes your fancy. I can see baked or sauteed bugs as a crunchy salad topping. Or dry and grind the cooked beetles and use them as a protein additive to soups, stews, and even baked goods. No one will know about your secret ingredient.

Their grubs, and those of the June bug and Green June beetle, also are edible. But the adults are much easier to gather.

The bugs are best collected in the cool of the morning or evening hours, especially when in shade, when they are more sluggish and less likely to fly. I've been knocking them into a wide mouth pint canning jar and slapping the lid on before they fly away. My husband just discovered the suggestion to use the upper portion of a plastic bottle inverted like a funnel into a jar. The bugs easily fall in, but can't fly out. That way I'm not constantly dropping the lid.

When I'm done collecting the beetles, I stick them in the freezer. An easy and humane kill.

So now that I've taken to looking at Japanese beetles as another thing to harvest from the garden, their numbers are decreasing. Figures. At least now I can almost look forward to their return next year.

Posted by Sandra M. Siebert at 3:26 PM No comments: