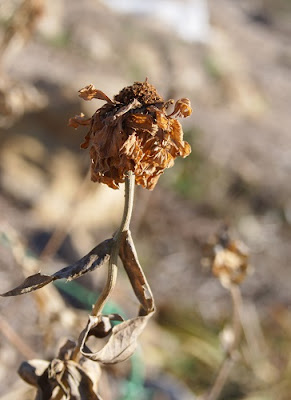 Brave little Zinnia set out one day, dressed in her brown winter garb. She looked out over the frost-burned landscape and frolicked in the snow that December had dropped around her.

The Barefoot Gardener had been barefoot in the garden clear through the middle of November, when brave little Zinnia still wore her bright summer hair. Even though late November brought chillier weather, it still remained quite pleasant for garden tasks.

But the flip of a calendar page brought December and December brought true winter weather (at last, although I did enjoy springlike November). A bit of snow even fell, briefly covering the garden in a thin layer of white.

Brave little Zinnia watched the Barefoot Gardener moving through the garden tucking her winter vegetables in snug and warm-enough so they would feed her until the winter solstice, and perhaps beyond. As frigid temperatures threatened, she harvested those things she had no desire to tuck in, such as the chard and celery, which had miraculously survived some pretty cold nights, but would not hold up when the temperatures dipped into the teens. 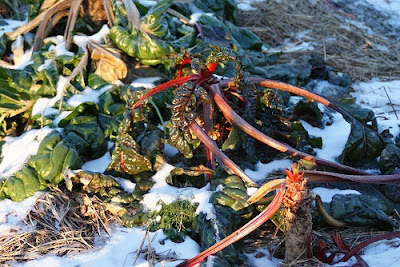 Even after such bitter cold and snow, the chard continues to provide graceful architecture in the winter landscape, its brilliant color barely dimmed by the cold, contrasting against the white icing.

And in case you're wondering what's going on beneath the plastic covering over the "low tunnels" in the garden, brave little Zinnia wanted you to see what the Barefoot Gardener was able to harvest just today, almost the middle of December. This basket contains two large green cabbages, a little chinese cabbage, four bok choy, some brussels sprouts greens, cilantro, and broccoli. Another large basket was filled with kale. 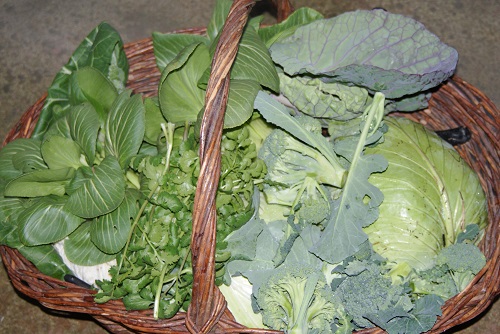 More of all these, plus lettuce, arugula, spinach, daikon, radicchio, beets, and mustard greens still wait in the cozy tunnels. A tangy winter solstice salad may be in the making. Barefoot Gardener loves chopping the tender, white center leaves of the Chinese cabbage to mix into lettuce and radicchio salads. More spinach, and leeks sit out the cold in open beds, protected only by a fluffy blanket of hay. 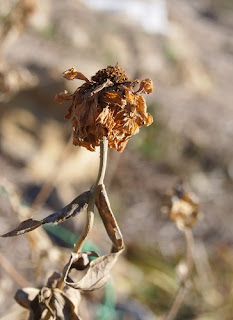 While veggies grow slowly in their chilly plastic homes, the Barefoot Gardener is inside sorting seeds, making lists of needs, perusing catalogs, filling the stove with logs, making plans on her garden maps, taking inadvertent naps, and cooking up the tasty green things. She'd like to spend more time outside in the garden, cleaning up the dried bean vines and crunchy, frozen summer plants, cutting the dead asparagus stalks, and digging zesty horseradish. But she's busy. Anyway it FEELS busy, although she's not ever sure what has been accomplished.

Brave little Zinnia is glad she's not doing much cleanup work yet, as she knows  that she and all her zinnia friends will become compost when Barefoot Gardener gets busy outside. But that's how it goes in this world. And brave little Zinnia is not worried.
Posted by Sandra M. Siebert at 9:06 PM No comments: