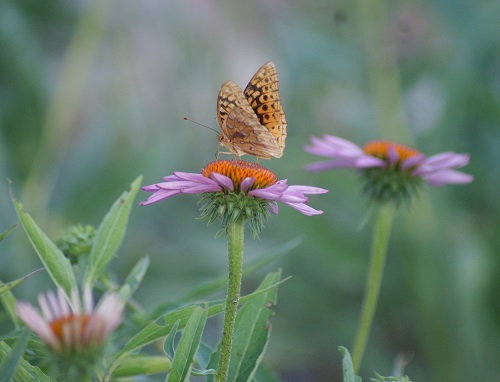 Summer has matured into cicada song.

Yesterday evening I sat on the porch drinking in the magnificent colors of the waning day.

Pink-gray clouds floated against a nearly turquoise sky. The whole world was bathed in a golden light. All the other colors of the world shone with more intensity -- the straw that lines the side of the foremost raised bed became the color of true gold. The red blossoms of the royal catchfly almost hurt my eyes in their intensity.

And, of course, green glowed with brilliance in the golden light.

This was not the soft golden light that envelops the world at sunset in late fall and winter -- the light created by long, slanting rays of sunlight.

No, this light was created by atmospheric conditions hinting at a summer rain and storm -- at least the potential. This light had an energy that said "wake up."

I sipped my tea and watched the colors change.

Then I noticed the cicada song, not the constant drone of the full cicada season, but one buzz here, one over there... In the space between cicada calls I heard a distant bird song, then a frog croak.

A few nights earlier the air was full of frog song.

Now the cicadas, after a year underground, are emerging to live their last few weeks flying, singing, and mating. The cicada song pulled my attention so completely into the moment that I almost felt I'd stepped into a dream.

The golden light dimmed...
And the fireflies began dancing.
Posted by Sandra M. Siebert at 9:17 PM No comments: