Tomato season ended a couple of weeks ago with the first frosty night. That day I went through the garden harvesting anything usable from the most frost-sensitive plants and ended up with a large basket of green tomatoes.

You already know this because of my fermentation post. Many of those tomatoes were covered in brine and left to sit for a week or so. Very fine fermented food. One shelf in our second refrigerator is filled with jars of fermented vegetables, and I'm still fermenting. A crock of kimchi ripens at this very moment. Right no w I'm waiting for my first ever batch of homemade yogurt to finish fermenting. Next week I'll mix daikon radish with horseradish, and maybe garlic and jalapenos for a clear-your-sinuses sort of pickle. 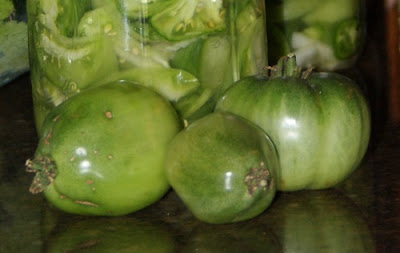 Anyway, I've already done a fermentation post. This one is titled "Green Stuff." So, green. Green tomatoes. The green tomato pickles are probably our favorite of the fermented vegetables, with lots of good-guy bugs for the belly.

Fermentation isn't the only thing you can do with green tomatoes.
Forget battered and fried. Forget piccalilli (a corrupted form of a spicy East Indian fermented vegetable relish that probably never even whispered to a green tomato). Don't mock mom's apple pie.
Try roasting.

Most of the green tomatoes that didn't get fermented got roasted. Maybe one of us also made another green-tomato curry with a few, but some got roasted. The same as I roast pretty much any vegetable: Place in shallow glass baking dish; drizzle with extra virgin olive oil, virgin coconut oil, or (if I'm feeling decadent) butter or ghee; place in 350- to 400-degree oven until it looks done -- 1 to 2 hours for really juicy stuff like tomatoes shorter for other things. You'll know when it's done.

I packed the roasted green tomatoes into wide mouth pint jars and stuck them in the freezer for later. Last week I pulled out one of those jars and a jar of roasted ripe tomatoes and made a yummy Moroccan style dish. A few of the green tomatoes also got roasted along with the last of the tomatillos and some garlic to make a nice salsa verde. 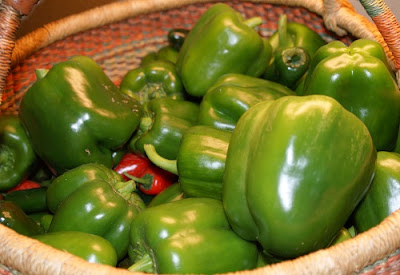 Four tasty, yummy things to do with green tomatoes that have nothing to do with battering and frying, or mocking mom's apple pie. No one will ever get a green tomato from me again.

On that first frosty night I covered the bell pepper and hot pepper plants because they had so many green fruits on them. I love bell peppers -- red, yellow, orange or whatever color they ripen to. I'm not so keen on the green. But after about a week, I got tired of trying to keep the peppers popping. The plants looked pooped, anyway. A few peppers had some color and I knew they'd ripen on the counter. But what to do with the green ones?
OK, roast them, too.
My husband started cutting up the green bells for the roasting pan and tasted a few in the process. He was skeptical that roasting would improve them much. He gave me a few bites; they were a bit bitter but not obnoxiously so. Still, there is a reason that I like to let my bells ripen. He got ready to compost the whole lot, but I convinced him to keep a few and roast them. I planned to roast some squash or something in a few day, anyway, so I wouldn't be wasting oven heat for just a few peppers.
The roasting took any bitter greenness right out of the peppers, which also got packed into jars for the freezer. We put some of them in our salads. Nice. Now we regret the peppers in the compost.

In that final pepper fury I also found myself in possession of a pile of green jalapeno peppers. Now what... that's right... roast 'em.

Next year I'll also try fermenting the green bells, probably in a vegetable medley. The jalapenos, both red and green, got put in many of the ferments to give them a little extra bite. The possibilities are endless.
Too much green? Nonsense!

Posted by Sandra M. Siebert at 9:33 PM No comments: 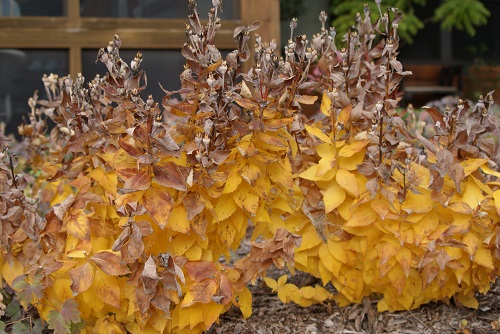 The purple-blossomed campanula has released its green into the earth and sky, showing colors hidden during summer's sunlight.

We have such trouble letting go, releasing our hold on things. But take note of the trees. They have released their leaves to the earth, revealing the beauty of their twiggy bones. They do not cling and weep, expressing regret. They simply let go.

The goldenrod, sunflower and aster release their seeds to the wind and earth. This is their purpose, to let go.

And so the gardener in tune with the season releases her harvests of tomatoes, peppers and other summer vegetables. She packs away the final harvests and lets go of the flurry of summer. She lets go and finds beauty in the release. She finds herself breathing. She pauses often in her tasks, which no longer have a hurried pace. She sits and sings lullabies to the descending sun.

Posted by Sandra M. Siebert at 8:42 AM No comments:

We celebrate green leaves, freshly opened flowers and apples swelling on the tree.

But this is the time of withering. Of seeding. This is the time for rest.
Beauty lies in the arms of decay.
Leaves expose their glorious colors only when life recedes from them and the trees release their hold.
Winter brings rest.
Celebrate the beauty in the withering forms, art created by decline, as well as the recent freeze.
Celebrate the wholeness of the cycling of Life, and Nature's creativity within.