To Fry or Not to Fry 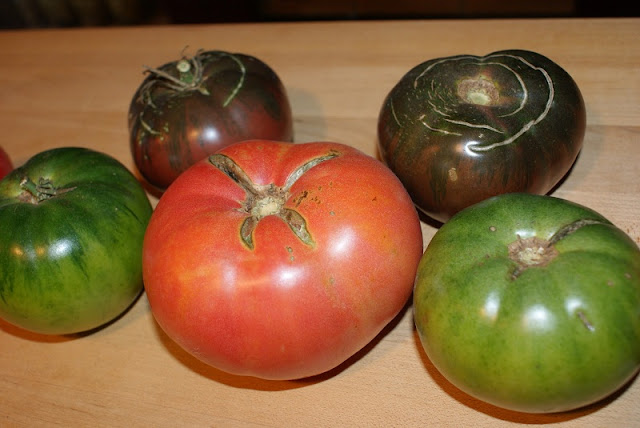 “Give me all you can spare.”
I giggled insanely when I read that e-mail.
All I can spare? Does she even realize?


The first weekend of October brought our first freeze -- not just a frost, a freeze, a hard one. The tomatoes were not producing much of anything but green tomatoes, so I did not try to save them. However, I did pick about half a bushel of green tomatoes. Someone could use them. I knew she had been delighted to receive green tomatoes last year to make picalilli. I knew she wouldn't use half a bushel of them, but I had them delivered to her anyway.
Half of them were returned to me.


Fortunately, someone said he would use a few in spaghetti sauce – he likes the tartness. Someone else said she wanted to try some fried ones. She took a couple.
“What about salsa verde?” I asked before she could escape.
“Can you make it with green tomatoes?”
“You can try.”
So I gave her a few more. The next day I found a recipe online for salsa verde made with green tomatoes, and sent her the link.


The rest of the green tomatoes, which were few, went into the compost heap. I've still got pickled green tomatoes I made last year.
Well, ok, I salvaged a couple and had them with lunch. I sauteed some vegetables with a nice curry seasoning and added the green tomatoes and a ripe one. Tasty.

This Web site offered 25 green tomato recipes, including the salsa verde recipe. Here is another site with recipes and this one has interesting variations. And yet one more. They start looking alike after a while, mostly battered and fried, or some sort of pickle or relish. Of course you have to have green tomato pie, as well.

This is the recipe I created last year to make pickled green tomatoes. 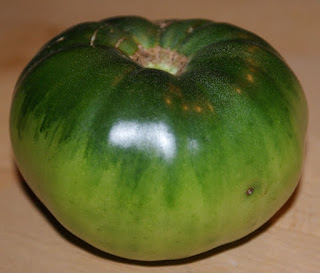 
Combine vinegar, salt, cinnamon, cloves and cardamom in a large saucepot. Heat to boiling and let cook for a few minutes. Remove spices and put 1 cinnamon stick, 2-3 whole cloves and 2 cardamom pods in each jar. Add tomatoes to vinegar and simmer 5 to 10 minutes. Quickly pack hot, sterile pint jars with tomatoes, then fill with vinegar to ½ inch from the top, making sure liquid covers all the tomatoes. Clean rims and cap each jar. Process in boiling water bath for 5 minutes. Makes 4 to 5 pints.

Posted by Sandra M. Siebert at 6:30 AM No comments:

Peck of Peppers, more or less 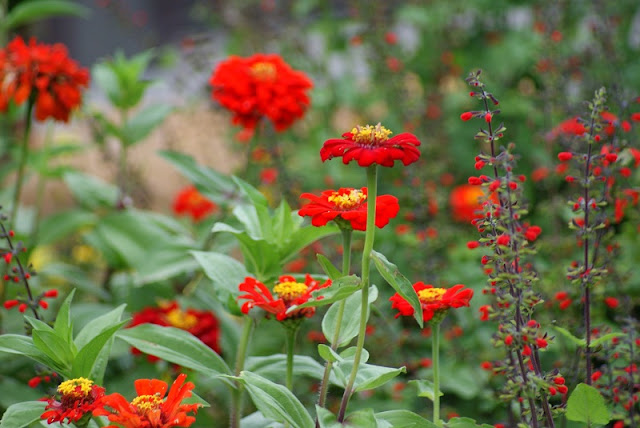 The peppers are done, for the most part. The flower gardens look rather bare. The tomatoes stand withered and browned by frost.

Sigh. I kind of thought that after this hellish summer we would get a late first freeze. Instead, it comes early and hard.


I went into the attic above the garage and brought down the sheets and blankets I use to protect things from frosty temps. The peppers, watermelons, one hill of cantaloupe and half of the pole beans got covered. I'd decided to let the tomatoes go. Draping sheets over pole beans is a bit more difficult than just throwing them over shorter plants, but I managed. 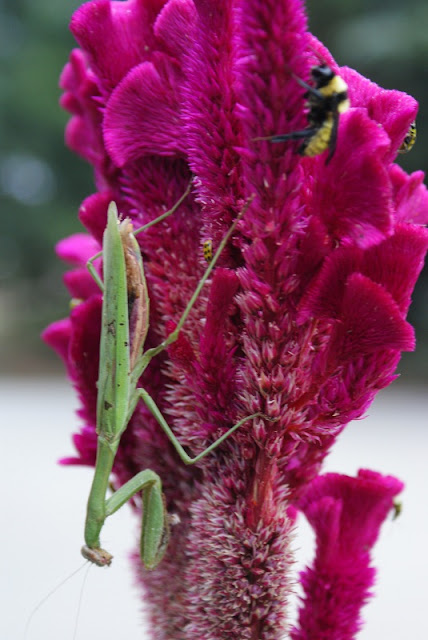 I should have saved myself the trouble. The beans bit the dust during the first freeze, in spite of being covered. Twenty-eight degrees F. was just too much. The peppers looked pretty singed, but alive. Both of the melons were covered with heavy blankets, not just sheets, so they fared a bit better, but still had some singed leaves.

Then I cut a few flowers, very few since many of them got burned a little by a near-freeze frost the day before.

After that night the forecast looked safe. No frosty weather in the outlook. I ignored the dead things in the garden (although my energetic husband spent an afternoon tidying up while I was in town for a meeting). I had a five-day camping trip at a music festival to plan for. Then two days before we were to leave, less than a week after the first freeze, the forecast called for another near-freeze -- 33 degrees, too close for comfort -- on the night before we left. So I covered the peppers and melons again. When I got up the next morning, the thermometer said 26.
Fortunately, we left late enough that it was safe to pull the covers off of everything. Things had survived, sort of. But we had a music festival to go to. The two brightly colored zinnias I had salvaged before that first freeze were still bright and fresh, with their accompaniment of lavender mint, so they graced our camp table at the festival. 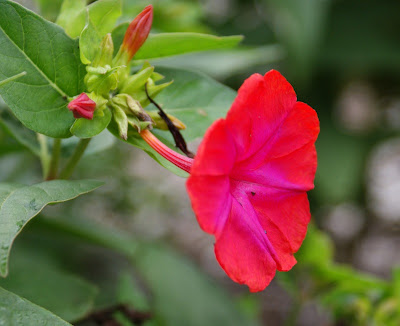 Today, I cut up the pepper plants and added them to the compost heap. The Thai chilis, the King of the North red bell pepper and most of the Orange bells. Four of the orange bells looked healthy enough to support the large green peppers they bore, so I decided to let them ripen. Now I have a large basket full of green bell peppers and a two or three dozen bells with at least a little color on them. I also picked a few small, ripe watermelons.

The Kansas cantaloupe has a few smallish melons ripening on the vine. I cover the near-ripe ones with plastic buckets weighted with rocks to thwart melon thieves. Last night I went out the back door and spied a melon-thieving oppossum waddling away.

The summer garden is winding down. Yet bounty is to be had. Today I pulled some large red radishes. We are feasting on kale and lettuce and waiting hopefully for cauliflower, broccoli, cabbage and brussels sprouts. With care, many of these things will last well into winter.

It seems odd to be suddenly in the midst of autumn.
Posted by Sandra M. Siebert at 10:15 PM 1 comment: