Tucking the Garden in Against the Cold 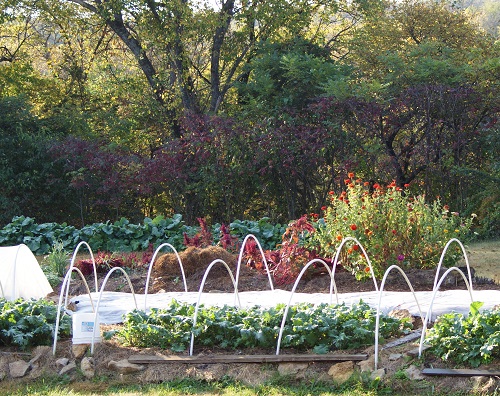 This view from my back door three weeks ago shows two seasons. The zinnias and amaranth coloring the middle ground are remnants of summer. Autumn shows itself in the red of the sumac leaves at the edge of the woods in the back, the thinning of the tree leaves, and the robust kale in the foreground, along with the white tunnels (barely showing to the left) protecting cabbages and lettuce of the autumn/winter garden.

A few days after I took the photo, the sumac dropped its leaves and the trees were more bare. The weather, though seemed more like late spring or early summer. We were hoping for some light freezes to sweeten the kale and cabbage. We did have a couple of frosts, but not freezes. Then early last week I looked at the forecast and nearly panicked. Snow and ice today and a low of 20 degrees Fahrenheit tomorrow (Tuesday) morning were expected.

This was the scene today. One season. Winter. 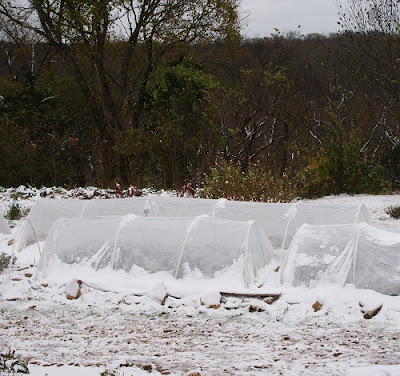 The kale is now under cover, as are  other autumn/winter vegetables.
Twenty degrees is awfully cold and would damage pretty much all of my autumn/winter crops without protection, even though they are considered "cold hardy" and "frost tolerant."
I started my three days of protecting my preciouses on Thursday. Winter seemed so far away as the sunny day temp climbed into the mid- or upper-80s. In the morning I faced the day with some dread. The job ahead seemed so enormous. But I got a lot done that day, easing the pace for the following two days.
I spent those three days tearing apart hay bales, piling hay around vegetables, and covering them with a heavy row cover (frost blanket) designed to give a few degrees of protection against cold -- over many things, two layers. The rutabagas got just hay, because I'm only concerned with protecting the roots. Most root vegetables will remain good in the ground, under a heavy mulch of hay, even though their tops might be killed. You can then dig or pull them through the winter, as long as the ground does not freeze.
Once I felt that everything was safe and cozy I began to wonder just how cold hardy all those vegetables were.
Most of the Web sites I visited had two lists that varied only slightly: one list was for vegetables damaged with a light frost (28-31 degrees Fahrenheit); and the other those damaged by a hard frost, 25 to 28 degrees.
But being a little damaged by low temperatures is not the same as being left inedible or dead. Then I stumbled across a blog by a woman (I'm sure I saw her speak once, at a Mother Earth News Fair several years ago) who, over several years, documented the temperatures at which various vegetables were killed. Blogger and author Pam Dawlings has decades of farming experience and for 20 years was the manager of the vegetable and berry gardens at the Twin Oaks Community in central Virginia. I was happy to see her information because it eased my mind; my efforts will most certainly keep my veggies safe tonight.
Rather than repeat her information, you can read the blog yourself. Some of the vegetables she noted as remaining alive until really cold temps in the teens I grow, such as Red Russian kale and Merveille des Quatre Saisons lettuce. They'll be just fine.
In a few days, temps will warm considerably and I can remove some of the row cover and see my beautiful vegetables again. And I'll sleep better tonight.

Posted by Sandra M. Siebert at 9:06 PM No comments: