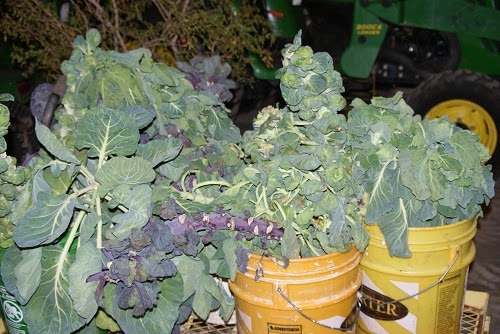 The beautiful autumn lulled us into a sense of well-being, causing me to assume that the autumn would trickle through November, perhaps into December. Our first killing frost arrived well after the usual first frost date, and I was sure we'd have it easy as we headed toward the Winter Solstice.

Ah, but Nature has her wily ways. We were "blessed" with an Arctic blast that shoved the temperatures well below normal -- maybe 20 or even 30 degrees lower than normal at times. On the morning of Tuesday, Nov. 18 I recorded a low temperature of 7 degrees F. That was a week ago. Today's weather is more seasonable, although it's only 37 degrees right now.

Not only were the human not ready for such a precipitous crash in the temperatures, the plants weren't quite there, either. A gradual shift from warm to cold allows plants to move energy from their upper portions into their roots, to "harden off" buds and stems that will come back to life in the spring. What exactly was the effect of this sudden plunge?

We won't know the answer until next spring.

And I pulled all the brussels sprouts, "re-planting" them in buckets full of compost and wheeled them into the garage (see photo above). Now I am harvesting the greens and loose sprouts at my leisure.

The kale, broccoli, cabbage and radicchio (I finally found the name of the variety I planted, Rossa di Verona) all survived the blast. The radicchio looks a bit rough, but the "heads" wrapped in layers of outer leaves should be fine. The lettuce is very questionable. Perhaps some of the young stuff will grow out of it, but we're forced to buy lettuce now.

Anyway, I am glad that this isn't Buffalo and it wasn't all buried beneath 7 feet of snow.
Yeah. 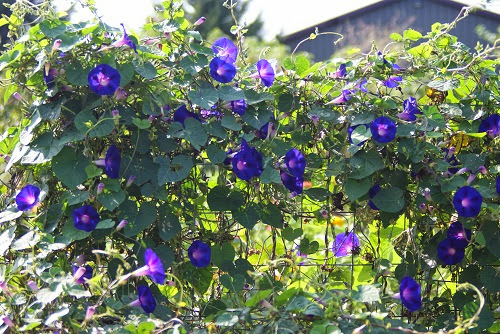 Don't let this photo fool you. This sun-drenched scene of morning glories growing on the back of the compost bin simply made me sigh with longing.
We are currently deep into the first week of January. Yes, I know, we haven't hit Thanksgiving yet. The weather, however, seems to think that it is January, or at least late December.

On Monday I worked outdoors in jeans and a shirt, and was still a bit too warm. It felt like May.
On Tuesday, we lit a fire in the stove and have not let it go out since. Lows in the teens and highs in the mid-20s to low 30s. And it will get colder yet with Monday night's (actually, Tuesday morning's) low in the single digits. Not November weather at all.

So I spent Monday morning removing the frost blanket from the low tunnels, watering and draping plastic over the hoops, with an extra bit of cover inside the low tunnel for good measure. As the lows deepened this week, I started draping extra sheets and blankets over the low tunnels. Tomorrow I will harvest more lettuce and put the extra covers inside so they don't get wet and heavy with Saturday's snowfall. A little on the early side for snow, too.

On the up side, the temperatures will climb by the middle of next week.

It was a lovely autumn, though. I spent many a warm autumn afternoon listening to the gentle thunk, thunk, thud of the hedge apples falling. I don't know how many wheelbarrow loads I carted to the edge of the woods, but it's hard to believe one tree can produce so much. Fortunately, only one of the two hedge -- aka Osage orange -- trees in our yard is female and fruit producing. The other is male, so it just pollinates.

One of today's tasks in preparation for the coming cold was to insulate the fig trees. While the roots of these trees will survive our Kansas winters, the upper portions will winterkill, so they must be protected against the cold if you want to get figs. Usually, this would be done a bit later, but usually, the temperatures drop a bit more slowly. I figured that another couple of nights in the teens and then 7 degrees F might be too much. So I stacked haybales (freshly cut this year) and plastic garbage bags stuffed with ripped up row cover around the figs, then draped the constructions with tarps and tied it all down (well enough, I hope) with used baling twine.

The fig trees are trained horizontally, in a free-standing espalier form -- free standing because they are not against a wall. This photo is of the larger and older of the two fig trees. Ideally, it would be in the center of the trellis, but I started it as a one-sided espalier running east and west. It now runs sort of north and south to better accommodate the second fig, and the planting area would not handle a third post further north of the trunk. This photo obviously shows the tree during warmer days. 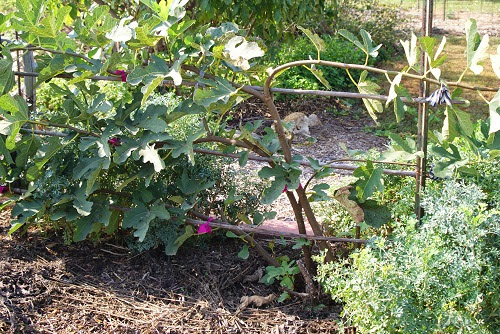 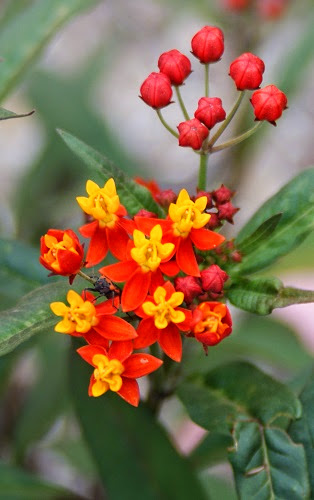 Even though winter has come hard and fast, I feel blessed by this growing season. Both of the small freezers are full. Kale and other cole crops still stand in the garden, and I hope keep standing. Freshly washed lettuce is draining in the sink. Remnants of summer -- dried tomatoes and eggplant -- sit in the pantry.

A few days ago I dug the roots of ashwaganda, an Ayurvedic herb that I grew for the first time this year. One quart and one pint of ashwaganda tincture steeps on the pantry shelf, alongside the echinacea tincture I started in July.

The house is warm and the tea kettle whistles, ready to brew homegrown herb tea. Yes, the garden has been good to me.

(At right: One more late summer/early autumn photo. Blossoms of the tropical milkweed that hosted several Monarch butterfly larvae. However, the bug peering from the blooms is a red and black milkweed bug, which looks suspiciously like a box elder bug, but isn't.)
Posted by Sandra M. Siebert at 6:46 PM No comments: