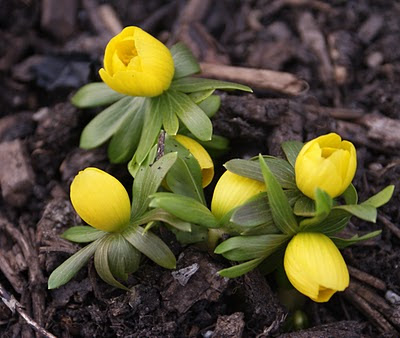 Another lovely day here in northeast Kansas and Spring keeps shining through the cracks in Winter.
I found winter aconite buds today, brilliant yellow buds before the foliage appears. It is growing three or four feet from where I planted it a couple of years ago.

Funny how that happens.
The daffodil and tulip leaves discovered a few days ago are a bit taller and I found crocus leaves, at last.
A visit to the hive early in the evening revealed that "the girls" had been out and about today, not wasting a moment of the warm weather (unlike me). Some were clustered around the hive entrance as others arrived laden with their bounty. Many, many of them had full pollen bags. Something is in bloom!

The weather changes tomorrow -- colder, with a promise of rain and/or snow. Ah, well. I know where Spring is shining through the cracks.
Posted by Sandra M. Siebert at 6:11 PM No comments:


Spring is peeking out from beneath the gray blanket of winter. Mild temperatures this past week have made it seem possible that spring will make an appearance at its appointed hour. Yesterday I went in search of signs that the crocus will arrive soon. No green blades of crocus leaves (where exactly are they all planted, anyway?) were apparent, but the tips of daffodil leaves and even tulip leaves had pushed up through the soil.

This week's weather forecast is not terribly warm -- except for the 50s on Wednesday. But the cold is not nearly so deep as it was just a couple of weeks ago. Tiny seedlings of nigella and poppies, self sown last summer and fall, are sprouting in all the wrong places and early annual weeds, such as veronica and henbit, are putting out green. The search begins for the "weed" chickweed, an excellent early spring wild green.

Indeed, Spring's flirty eyes are peering out.
Posted by Sandra M. Siebert at 10:12 AM No comments:

The thermometer said 80 at some point yesterday afternoon. The windows were open all day. My morning trip to the mailbox (a quarter-mile walk) had me stripping off excess clothing. Our giant pile of snow where all the shovelled snow got dumped was reduced to a footprint-sized patch.

On the way to the mailbox I gave the bees a small jar of sugar juice to supplement the little bit of nectar available from whatever trees might be in bloom right now. Dozens of bees were swarming the compost heap when I went to dump the bucket of kitchen scraps. What's up with that? The heap is topped with kitchen scraps -- orange rinds, apple cores, celery bottoms, banana peels and so on.

Are they looking for fruit and vegetable juice that might contain a little sugar? Or are they simply seeking the water in them? It seems that the nearby pond, though very low and mostly frozen, would be quicker to reach. Another mystery of nature.

The lettuce in the tunnels wasn't quite so positive. Some green was evident in spots, and some lettuce obviously won't be coming back. Most of it looked bad, but COULD be alive, if one takes a positive attitude. So, we'll see.

I will close the tunnels again before Monday (when the overnight low is suppose to be about 20; we knew winter wasn't really over). But soon I will pull off the plastic, rework the hay mulch and maybe even plant lettuce seed. The question then will be whether to put the plastic back on or replace it with a frost blanket (just a heavy row cover). That is a question to answer later.

Yesterday I planted bell pepper seeds and Black Enorma eggplant seeds in flats. Earlier in the week I started several other eggplant varieties (Ping Tung Long, Bride, Early Long Purple, Italian Long Purple, Florida High Bush) and some Super Jericho romaine lettuce. In a couple of days I plan to start seeds of various flowers, including Echinacea angustifolia and clasping coneflower, both native wildflowers. In a couple of weeks, it will be tomatoes and not long after that, the broccoli and lacinato kale plants now sitting on shelves will go into the ground.

The gardening season is easing into place once more. The cycle of life just keeps spinning.
Posted by Sandra M. Siebert at 8:16 AM No comments:

﻿ ﻿﻿﻿﻿﻿
﻿﻿﻿﻿﻿﻿﻿﻿If the groundhog didn't see his shadow here yesterday then he was just snowblind.
After a snowy, blowy Tuesday, Wednesday was gorgeous and sunny. Of course, you know that means we'll have a whole month and a half of winter yet, while those lucky blokes who were still in the thralls of Mother Nature's furry have just six weeks until spring.
It's another sparkly day here on Cedar Springs Farm, Kansas, and I've got to fill the bird feeders again. The birds hit them hard the last couple of days. They even braved the blizzard to have breakfast lunch and dinner. Anyone who thinks those little birds are delicate should have watched them in the blowing snow.
The low hit 9 below before sunrise this morning. But spring is coming and soon I will start the eggplants and peppers. For now, however, it's another log of hedge on the fire.
Posted by Sandra M. Siebert at 9:05 AM No comments: