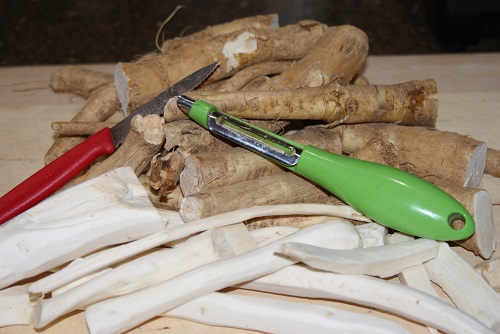 I know, I know, I've already told you all about horseradish and what a wonderful thing it is.

What you need for this are:
Horseradish root (well, duh!)
A good paring knife, preferably serated
A good vegetable peeler
A sturdy blender or food processor (we have a Vitamix)
Some water
Vinegar, I prefer cider vinegar, but use what you like
Jars to put the prepared root in 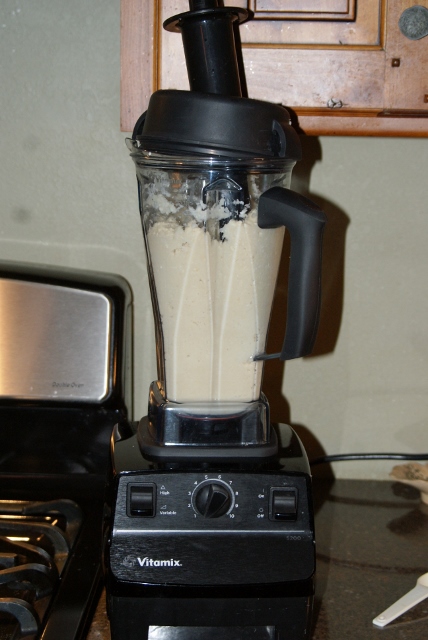 Back in November or December I dug a bunch of the root right before the weather turned bitterly cold. I didn't want to take the time to clean it, so I left it in a five-gallon bucket in our attached garage. I figured that would be like the refrigerator. I should have covered the horseradish to prevent moisture loss -- not tightly, but loosely -- as by the time I got around to cleaning it some of the thinner pieces had gone a little limp; but no worries, it was still good. To clean, I put the roots in a dish tub full of water and let them soak for a while to loosen the dirt still clinging to them. Then I scrubbed off the dirt and cut away any bits that were funky or too old or otherwise not usable. Then I but them in a crisper drawer in the fridge. They also can be put in an open plastic bag in the refrigerator. Just be sure you use them before they start molding.

Peel the roots with your vegetable peeler and cut away any spots, discolored ends, etc.
Cut roots into small chunks, like about one-inch long pieces. Roots with a large diameter should be cut smaller. Put all your chunks in the blender or food processor. And add water. You'll need water or your blender will burn up. I think I put in enough water to go halfway up the root in the blender. You can add more, but my husband doesn't like his horseradish too juicy, so I used vinegar as some of the blending liquid. Because I knew that I would have at least three cups of prepared horseradish, I put in enough vinegar for that amount of sauce, and added more later when it became apparent how much I would have. Supposedly, adding the vinegar right away tames down the mustardy heat. I don't know. If this horseradish was tamed by the immediate addition of vinegar, I am glad I didn't wait.

So, how much vinegar?

Two to 3 tablespoons per cup of prepared horseradish. I lean toward the larger amount.

Now blend/process. Stop every couple of minutes or so to give the motor a rest. The Vitamix has some kind of sensor that will stop it before you completely burn up the motor. I managed to avoid that until the very end. You can ruin your machine if you don't give it a rest. 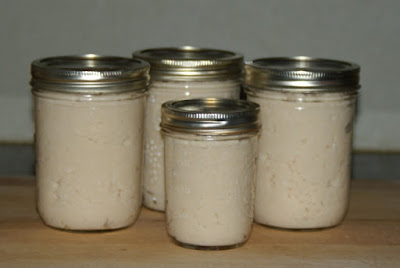 When it becomes clear how much prepared horseradish you will have, add the rest of the vinegar.

DO NOT PUT YOUR FACE DIRECTLY OVER THE BLENDER/PROCESSOR WHEN YOU OPEN IT. Unless you want searing pain in your eyes and sinuses. I do my blending on the counter next to my cook stove so I can run the range hood fan to exhaust any mustard gas fumes from the horseradish. Next I shovel the prepared horseradish into canning jars and cap them tightly. I got three pints and one half pint out of this batch.

Store in the refrigerator. Don't wait too long to use it, as its potency deteriorates over time. It's best to store fresh root in the refrigerator and process only as much as you can use in a couple of months. Eat frequently to get the maximum health benefits from it and because it really perks up food. I like mixing it with my homemade apple butter. I spread it on my baked salmon and even just eat the blend on its own. Maybe put some horseradish on your apple pie. Mash horseradish in with avocado. Mix in with mashed potatoes. Good food.

Winter is indeed upon us at last. I was beginning to think that my rosemary plants might be able to make it through this winter, since we had high temperatures in the 50s and even 60s Fahrenheit, with only occasional dips into the upper 30s and 40s for highs, through the Winter Solstice on the 21st. After that, the forecast said, we would see highs in the 30s, more "use-to-be-normal" temperatures.

That changed quite rapidly and unexpectedly, however. Within a few days we had highs in the teens and single-digit lows and by New Year's Day we were facing single-digit HIGHS and below zero lows. As I write this the temperature readout sits at 9 degrees F, but the National Weather Service thinks we'll almost reach 30 degrees today. By Saturday we should break above the freezing point and Sunday looks positively warm with a high in the low 40s.

Needless to say, I haven't spent much time outdoors during the past couple of weeks. No worries, though, as I have plenty of things to keep me busy indoors. I'm back to work on my book, and finally have a tentative publication date of December. More on that as the date nears.

When this first cold wave hit I felt relief. I even welcomed the sub-zero temps. As I cut back the horseradish leaves this fall I noticed that the harlequin bugs were making a comeback. They moved in several years ago from a bit warmer climate and cannot take that kind of cold. Someone else pointed out that the "sky chiggers," the oak gall itch mites, also would be taken out by the cold. Hurray! Dare I hope it will cut down on the squash bugs, too? One can dream.

Because the initial forecast was far more mild than it turned out to be, I thought we might still have a few weeks before the ground froze, so I didn't finish all of the tasks that require digging. I dug more horseradish, though, and heavily mulched the horseradish beds to delay freezing. With the below-zero temperatures and no temps above freezing for a couple of weeks, I'm not sure whether the mulch will be sufficient to keep the horseradish beds unfrozen.

Yesterday I finally scrubbed the horseradish roots I dug before the cold hit. I had simply stuck them in a bucket and left them in our attached garage. They were beginning to get a little limp, but they'll still make a fine horseradish sauce. I prepare my horseradish in a blender, on the counter next to our range so I can turn on the exhaust fan. The fumes from grinding horseradish can be quite powerful. It is important to hold your face away from the blender when you open or much pain and watering of the eyes. Add water to blend, then add vinegar -- 2-3 tablespoons per cup of prepared horseradish. The sooner you add the vinegar the less "hot" the sauce will be. But I put the vinegar in shortly after I begin blending and it is still incredibly potent. I can't imagine it being more potent.

Horseradish has been on the menu and in the medicine chest for at least 3,500 years. The earlier evidence of its use comes from Egypt in 1500 BCE. It is eaten as one of the bitter herbs during Passover. The ancient Greeks rubbed it into their skin to ease lower back pain and even considered it an aphrodisiac (eaten, rather than rubbed into the essential parts, I presume). In the late 1600s, inns offered it in a cordial to exhausted travelers. Recipes for "fire cider" include horseradish among their ingredients. Fire cider is made with cider vinegar and various antimicrobial herbs, and sipped frequently to prevent winter illnesses. In spite of it containing horseradish and cayenne, I didn't taste any "fire" in it when I made it.

Horseradish has multiple culinary uses. I like simply stirring it into dishes. Last year while looking for recipes using horseradish I found one for Beet and Apple Soup with Horseradish Cream. I've altered the recipe, adding cabbage (because it seemed a rather German recipe and I couldn't imagine it without cabbage), and other vegetables, as well as some thyme to season, and... well I can't leave any recipe unaltered. But it's good. And I don't bother with the "cream" part, I just stir in plain prepared horseradish. It's one of the few dishes I make that I think of as "German." Most of my ancestors come from Germany and it's nice to have a recipe from the Old Country, even though I've never identified with my German heritage.

The German name for horseradish is "meerrettich," meaning "sea radish." Some theorize that the name was Anglicized as "mare radish," then further corrupted, changing "mare" to "horse." The root has nothing to do with horses, and is even toxic to them.

If you want some recipe ideas, head on over to horseradish.org (yes, a whole Web site about horseradish). You will find dozens of recipes there, although I think they could easily expand their information on horseradish in general.

For humans, horseradish is a nutritious and medicinal food. It boosts immunity, contains antioxidants and vitamin C, boost the metabolism, is anti-microbial, and benefits respiratory issues. Take a bite of horseradish and you can feel its effects immediately on the sinuses. Horseradish has many other medicinal qualities, as well. Make horseradish vinegar as a rinse to treat dandruff, or use as a poultice or liniment to treat muscle aches, arthritis and rheumatism, or as a chest rub for congestion.

Horseradish is a member of the cabbage/mustard family and is a persistent perennial. When you read about cultivating horseradish the authors will tell you to save smaller root pieces as you dig and replant them. I've never found that necessary. It is nearly impossible for me to dig out all of the root, and wherever root is left in the soil, new plants will rise. So plant it in a permanent spot because you ain't getting rid of it. And the patch will gradually expand in size. I have to work at keeping it from overtaking the paths that surround the horseradish bed. It is presumable attacked by any pest that likes cabbages and mustards, but I've only found harlequin bugs in it. Since they don't attack the roots, I don't worry about them, except to keep them from spreading to the other cabbage/mustard family vegetables.

Horseradish is a very easy care vegetable/herb. I hope that the mulch will allow me to dig at least one more batch of roots (which are best dug in fall after frost kills the leaves, then through the winter when ground is not frozen) this winter. Perhaps the rain forecast for Sunday will help. First I'll peel and prepare the roots I have. Bon apetit.

Posted by Sandra M. Siebert at 9:44 AM No comments: