﻿
The Summer that I Thought Would Never End is over.
We celebrated the Autumn Equinox last weekend, so it is officially Fall.

But that is not what put an end to the Summer that I Thought Would Not...
For the past month or so, the weather has been much cooler. Not just cooler, but downright chilly at times. Now I wait until late in the morning to head to the garden -- so that it will have warmed up a bit.

﻿
﻿﻿ Rain remains scarce, but the cooler temperatures mean that plants transpire (lose water) much less than they do when it is hot.

The woods surrounding me are rife with color. Red flames climb many of the trees... red flames that are Virginia Creeper, mostly. I am glad that only a few of the vines climbing the trees are poison ivy. However, Poison Ivy burns lower, at the edges of the woods. Both are a wonderfully rich scarlet.

The beautiful orange-yellow of what I have now identified as a white ash tree glows among the yellowing green of the elms and walnuts. As the leaves begin to fall from these trees later in the season, the oaks and sycamores and others will put out their autumn colors.

﻿
﻿
﻿
The hours around sunset are gloriously beautiful. I have made a point these last few days to wander out at about that time (6:30 or so), as the sun sinks lower and the golden hue to the light enhances the glorious color in the woods.

With the cooler temps, and the little bits of rain we've had, the garden has rebounded. The cantaloupes, which I thought were about done when August hit, now have little melons. The Kansas variety has produced a number of ripe ones. They are small, but....

﻿ The cantaloupes disappointed me this summer. I don't know what it was, but the flavor just wasn't what I had come to expect. So I did not expect much from these little late ones.
I cut open the first one to ripen and caught a whiff of a delicate fragrance.
﻿﻿

﻿
Then I ate one and an oh-my-God sweet deliciousness filled my mouth and forced me to consume several more pieces. What a wonderful treat at the end of the summer that I feared would not end.

The green beans have rebounded, as well. I can pick a small basketful every other day. A couple of weeks ago I wrote my newspaper column on green beans, because of this rebound. I had intended to write more about them here, but was getting ready to attend a four-day women's retreat and didn't get around to doing it. I have now forgotten what else I had wanted to say about beans. The varieties I have growing right now are pole beans -- Lazy Housewife, Ideal Market, and Blue Lake.
﻿
The bumblebees are taking advantage of the bean blooms and make quite a ruckus while working there.
﻿
﻿

The flower gardens also have come to life, celebrating the change of season with colors that seem exceptionally brilliant.

And one of the apple trees has decided to put on a few blooms.

Nature just gets curiouser and curiouser.

Posted by Sandra M. Siebert at 9:27 PM No comments: 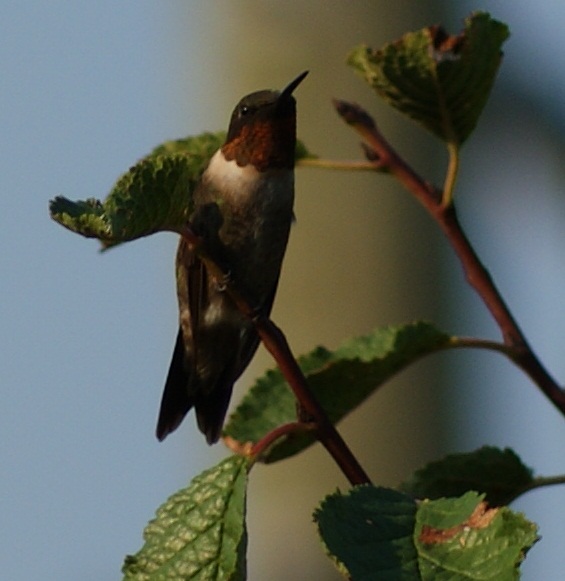 When we take our meals on the screened in porch, I frequently hear a small “vrooom, vrooom, vrooom” behind me. That is where the hummingbird feeder hangs. The sound (something like a very fast 4-inch helicopter) is of one ruby-throated hummingbird defending its territory from the invasion of another that has taken interest in the feeder. 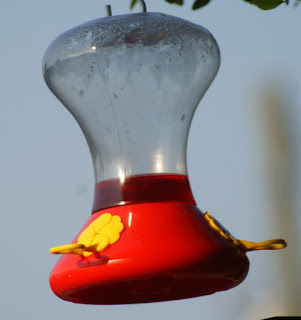 The hummer sits on the tip of a branch of the nearby plum tree, or sometimes at the much, much higher tip of a branch on a walnut tree and guards the feeder. It rarely stops to drink, but instead expends its energy “protecting” its food source. We’ve tried telling it that the feeder has plenty for all, but to no avail.


This behavior is typical of the unsocial ruby-throated hummingbird (and of other but not all hummingbird species, I presume). Both males and females defend territories, with some supposedly rotating use and defense of feeding sites.


Males and females do not even tolerate each other, except for the few brief moments of mating. The female builds the nest, weaving it together with spider webs, and raises the young on her own, while the male mates with as many females as possible.

We usually don’t hang hummingbird feeders, but this year, the heat and drought has seriously reduced the blooms in the garden and wild. Right now, the hummers are fattening up for their migratory trek, a nonstop flight of hundreds of miles to Florida, or Central America, perhaps even South America. So they need some extra sustenance.


The ruby-throat is not the only hummingbird species in Kansas, but it is the one I see, possibly exclusively. Other Kansas species seen every year include the rufous, broad-billed, black-chinned, Anna’s and magnificent. Four rare species that have been seen in the state are Calliope, broad-tailed, Allen’s and Costa’s. And just for good measure, here is a link to a site with several photos of several of these species.


I have attempted to plant flowers near our summer dining area that will attract hummingbirds (as well as butterflies and bees). The flowers they are drinking from now are the annual Lady in Red Salvia, four-o’ clocks, and Madagascar periwinkle. Earlier in the summer they dined on Royal Catchfly (Silene regia) and the bright orange blooms of the dwarf pomegranate growing in a large pot on the front porch.
﻿
﻿﻿While they prefer red blossoms, I also have seen hummingbirds feeding from the purple blossoms of garden sage, as well as the blossoms of pole beans, long beans and black-eye peas.


Tubular flowers best fit their long, thin beaks, so such things as cardinal flower, trumpet vine, honeysuckle, bee balm, morning glory, columbine, salvia and jewel weed are great food sources. This, of course is not a complete list. When the situation is tough, they will drink from any nectar source they can get their beaks into. I’ve even seen one going after the blooms of rugosa rose. I am not sure what wild flower species provide them with food, perhaps the blue sage now blooming in our small meadow area. Or milkweeds? I can’t think of any red wildflowers here.


﻿﻿ Fortunately, hummingbirds do not rely solely on nectar. They also eat insects. Which provides protein.


Hummingbird feeders must be cleaned frequently, to prevent the sugar solution from getting nasty and sickening for the birds. Red food coloring often is added to the solution, but is not necessary and can even be harmful. As long as the feeder is red, the hummers will get the idea.


According to an Audubon Web site, you should continue feeding until you have not seen a hummer at the feeder for several days. As the local population moves on, the migrators from other regions will pass through and use the feeder. They don’t hang around just because food is available. They may be bird brains, but they aren’t stupid.

Posted by Sandra M. Siebert at 1:50 PM No comments: