A few weeks ago someone asked me "What's new in the garden? I know you've always got something new going on."

I heard disappointment in her voice when I lamely responded, "Oh, it's all pretty much the same old thing. I'm planting cauliflower again."

So then a few days later, maybe even the next day while in the garden I looked around and thought, "Why yes, I do have new things in the garden."

She was right. I've always got something new going on... or almost always.

The first thing that jumped out at me in the was something I didn't plant so much for its culinary aspects as its health benefits; bitter melon (Momordica charantia), also known as bitter gourd, balsam pear, balsam apple and probably many other names. It is native to Asia, southern China and eastern India, and is a key part of Asian and Indian cuisine.

Bitter melon is, well, bitter, very much so. But when small amounts are added to highly seasoned foods they add a nicely bitter touch. I've said before (and will probably say on many other occasions) that we Americans should learn to cultivate a taste for bitter foods. Bitter flavors improve our digestion and all of us "angry Americans" could certainly benefit from better digestion. Plus, bitter melon possesses the ability to assist in controlling blood sugar. It can be useful in diabetic or pre-diabetic conditions. Please consult a professional with herbal knowledge before using it for these conditions. However, adding some bitter melon to your meals can't hurt.

Bitter melon apparently loved the craziness of our hot and not-so-wet weather. Online sources claim it requires regular fertilizing and moderate watering, but this plant has received nothing but the initial application of manure, and rainwater. And it's doing just dandy. A member of the cucumber/squash/melon/gourd family (Cucurbitaceae) bitter melon supposedly succumbs to all the ailments of members of that family. However, it does not appear to be bothered at all by the critters and diseases taking aim at my other cucurbits. (RIP watermelons)

It's actually a very pretty vine and could quite easily grow on a trellis in the ornamental garden. The other evening I noticed that the flowers, and perhaps foliage, also had a pleasant fragrance. So definitely look at it as having potential ornamental value.

I had not clue what to expect from bitter melon, but am pleased. We finely chop small amounts and saute them slightly before adding to dishes. It works particularly well with curries, both Indian and Asian. Or slice and roast the melons before adding. I found one Indian recipe that I found interesting, a fried bitter melon ("karela" in Hindi) and coconut dish that is used as a condiment. I love coconut, but don't really "fry" anything, especially not deep frying (that's another topic on healthful cooking), so I adapted the recipe, also eliminating the sugar. Somewhat disappointing. Maybe I'll try again now that I've acquired a taste for it.

The Mexican sour gherkin is next on the "what's new" list. The sour gherkin, or "cucuamelon," AKA "mouse melon" (Melothria scabra) also belongs to the family of cucurbits. Its delicate vines and leaves are quite charming climbing up the empty end of the bean trellis. The tiny (oh so tiny) fruits are adorable, but are taking quite a long time to achieve any size, even though their mature size is that of a large grape. They did originate in Mexico and Central America and can be eaten fresh, pickled or cooked. Versatile, cute, and possessing a cucumbery taste. Not sure I will harvest enough to be worth pickling.

The other night I picked one small, immature louffa gourd (Luffa aegyptiaca), yet another cucurbit. I found the seed at a local seed fair this spring and thought, "Why not?" (I get into real trouble with those two words, horticulturally, that is.) It is doing much better than my ordinary cucurbits, loving the heat. I've learned that I probably planted the seeds far too late to get mature gourds from which I can make sturdy scrubbing sponges. That's just fine. It's a pretty enough vine and the immature gourds are edible -- sort of like summer squash. It's always nice to get some kind of veggie that's not a brassica (cabbage/mustard family) or solonaceae (tomatoes, peppers, etc.). The one little louffa fruit I picked, about 8 inches long, was tender and edible. (Sorry, no pictures. I ate it.)

Then there is the Lemon Squash. My neighbor gave me the seed of this summer squash, saying it holds up to squash bugs better than zucchini. So far it's still alive and has two lemon-colored fruits. I'll give them a couple more days to put on some size and pick them, adding them to the little crookneck I picked yesterday. Since these summer squashes, which I planted in late June, are close outside the back door, I've been dumping water on them regularly. At least every other day. That may be the key to keeping them going during squash bug attack. Maybe. We'll see.

I think I'll stop here now. I've got a couple of other sort of new things, but they aren't cucurbits and I don't want to spoil the theme.
Posted by Sandra M. Siebert at 7:58 PM No comments: 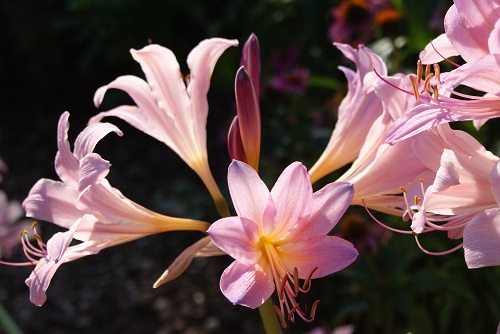 The garden provides many forms of surprises, often not pleasant ones -- like this year's onslaught of cucumber beetles and squash bugs in my watermelons.

However, the pleasant ones do exist in multitudes. You just need to get past focusing on weeds and worms and whacky weather.

Sometimes the surprises aren't really surprises, they are simply sudden pleasantness. Such as the above"Naked Ladies" making their stately entrance early this week. They aren't a surprise in the fact that I knew I'd planted them. However, like the spring blooming bulbs and many other perennial plants, I often forget exactly where and how many I've planted. Or perhaps I thought they died out and suddenly, there they are.

Always curious about plants, especially the common, ordinary ones, I decided to do a bit of research on the Naked Lady, so called because the flower stalks appear only after the foliage has withered and been forgotten. Most people will know them as "Surprise Lilies," which are part of a group of flowers containing several species. The fragrant pink ones we see around here are Lycoris squamigera, which might be a hybrid of two other species. I don't know. I don't care. They are lovely. And so are the other species, the red and yellow spider lilies, yellow surprise lily, long tube surprise lily, magic lily, peppermint lily, and tie dye lily (which looks much like these "common" ones, but with a rich blue at the petal tips. During my research I discovered a nursery that sells many species and cultivars of these beautiful surprises. Check out their photo gallery. I may have to start a little collection... hmmm?

Other surprises catch me off guard. This evening I went out after dinner to dump my wheelbarrow load of freshly pulled weeds and put away my tools. As I wheeled everything back to the house I caught sight of masses of bright white, magenta and yellow blooms glowing in the dusky light. The Four-O'clocks (Myrabilis) had blossomed. I knew these plants were there, but had not really seen them at dusk, or paid much attention at all. Standing about five feet from them I caught a whiff of perfume in the air. The four-o'clocks also scented the night. Incredible. No photos of this could do the sight (or smell) justice. So, no photos.

But I will leave you with another colorful photo. For weeks we've watched as the Stanley plums ripened on the tree, becoming a deeper and deeper purple. They are in plain view of our favorite dining spot, so we see them frequently. They are almost ripe. We'll split them open and dry them for sweet treats later on. Not a surprise, precisely, but welcomed. Life is good. 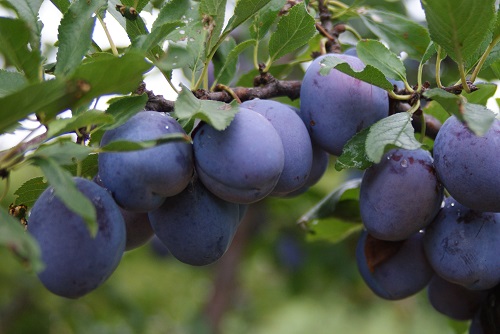