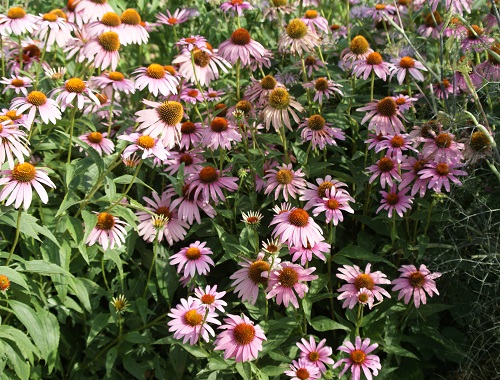 I've been growing purple coneflower (Echinacea purpurea) for years, decades even. So why didn't I know they had such a lovely fragrance?

Two or three weeks ago while pulling weeds from the path near this mass of coneflower I paused and wondered what that lovely fragrance was. Bumblebees buzzed around the flowers, sipping nectar. Could it be...?

I brought my nose next to a spiked flower and inhaled. Oh my. What a lovely fragrance.

The flowers only release mass quantities of fragrance when it's warm and humid. At least that's one bonus of warm, humid mornings that cause me to break a sweat without trying.

I love this wonderful plant even more.

I grow four species of Echinacea and apparently a hybrid now. Not only E. purpurea, but also E. pallida, the species that grows in local prairies; E. angustifolia, the one considered the official "medicinal" echinacea; E. paradoxa with its bright yellow flowers and an orange variation. And now I have one that is possibly a cross between paradoxa and either pallida or purpurea, with pale yellow petals.

One tiny seedling of the rare E. tennesseensis grows in a pot on my front porch. I won't claim to grow five species until it finds its home in the soil somewhere in the garden.
Posted by Sandra M. Siebert at 10:55 AM No comments:

Apples of My Eye

All of our apples trees bear heavy loads this year. We've been planning to share the crop -- wormy as it might be since we've done no spraying -- with family and friends. We planted way too many apple trees while dreaming about selling organic apples at the farmers market.

But growing apples organically in Kansas is tough and selling at farmers market will remain just a dream for us. If we had it to do over again we would plant far fewer fruit trees and more berries.

We've not got way too many apples for ourselves. We figure we'll just let others come and pick for themselves.

Well others are coming to pick our apples... uninvited. And they're not the human kind of thieves.

For the past week or two we've watched the apples on the William's Pride tree grow redder and redder. The usual harvest time for that variety is August, so I wasn't getting too eager to pick them, although from a distance they sure looked ready.

They must have been ready, for on his daily walk yesterday morning my husband noticed that nearly all of the apples on that tree were gone, except for about a dozen that were still half green. During the night squirrels and/or raccoons and/or opossums had an apple picking party.

My visions of baked apple deliciousness were dashed. On the other hand I don't have to figure out what to do with all of those apples. Yesterday evening I went down and picked all of the remaining apples that I could reach from the ground. That should be enough. Even half green they taste pretty good, and they're pretty clean, not terribly wormy.

I'll watch the other trees more closely and when the apples start looking ripe, I'll call in the family and friends for an apple picking party, with human guests this time.
Posted by Sandra M. Siebert at 10:37 AM No comments: 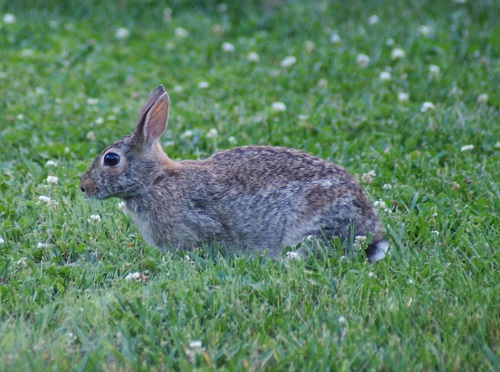 Rabbits: the perpetual curse. Or is it a blessing in disguise? I go back and forth.

I jokingly (half jokingly) refer to them as our "pet" rabbits. Looked at from one perspective, we are encroaching on their space, changing the environment. If I provide an easy food source for them, why shouldn't they take advantage.

I get along with the rabbits by building fences around the things they most like to eat (young pea plants, bean plants, chard, beets, sweet potatoes, strawberries, and apparently young okra plants. The deer also like to strawberry and sweet potato plants, so I have to put a chicken wire "top" on those beds to keep the deer from reaching over, or simply stepping over the two-foot tall rabbits fences. The deer seem easier to thwart than the rabbits, though.

Erecting chicken wire fences makes for an extra gardening task, but it's worth it to save the frustration of having my plants eaten, and it detracts less from the aesthetics than the white row cover. Besides, if I plan correctly I don't need to take all of them down and put them back up at the end of the season. For example, I'll leave up the fence around the sweet potatoes and plant peas and/or beans there next year. The fence around the strawberries just stays, since they are a perennial crop.

Row cover can't be considered a fool proof barrier against rabbits anyway. Two years ago (or was it last year?) a crafty rabbit learned that it can get to my tasty bush beans by tearing a hole in the row cover.

Or if I trap baby bunnies inside (How was I supposed to know they were there?) a row covered tunnel mama will readily tear her way in. A few weeks ago I had left the row cover off of the cabbages to facilitate the path rehabilitation project -- and doesn't it look nice. Before putting the row cover back in place I sprayed with Bt to take care of any cabbage eating larvae that might hatch out. The next day I noticed a large hole in the end of one of the row covers. And it just happened to be a new cover. The one that had been on there had gotten beaten up by the various elements and needed to be fully intact because I was planting squash in there as I harvested the cabbages. I hoped to delay the onslaught of squash bugs and cucumber beetles. So having a large hole torn in that row cover seemed a particular insult.

I waited a couple of days to patch the hole (with duct tape). The morning after I'd patched it, it was torn again, right next to the patch. At first I thought that the row cover was just weak there and the wind (we'd had a lot of it) just ripped it again. So I used more duct tape. The next day another rip! Aargh. Patch. Hmmm. Could it be that a mama bunny had hidden babies under the spreading leaves of the cabbages?

The next morning I stepped out onto the front steps to greet the sun and saw a hole in a different spot... aaaand a rabbit shoving her way through the row cover right next to the patch over the original holl -- FROM THE INSIDE! I am certain it was the very rabbit pictured above, as she is feeding on clover near that particular cabbage patch.

Bingo. My suspicions were correct. I pulled back the row cover and started tilting back cabbages. It didn't take long for me to discover the babies, fully furred and quite mobile, under one of the cabbages. I chased them out of the bed -- which took a few minutes because they split up and hid under other cabbages. Then I took off all the lower cabbage leaves, creating a less attractive hiding spot, chased out the last bunny and put the row cover back.

No more holes torn into the row cover. Problem solved. Now I can chuckle about actually finding babies in the cabbage patch.

Faster than a Speeding Bullet... 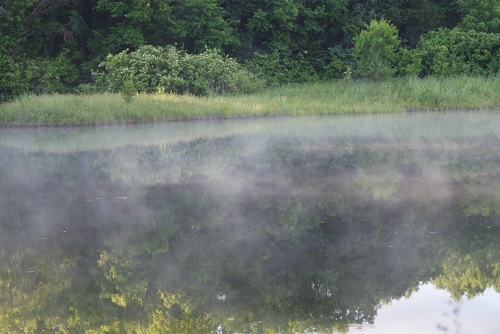 But, as I said, so much garden stuff happens. I go for days without even turning on the computer. When I do sit down and turn it on I'm often in a hurry, or more likely too tired to put effort into writing something. I might sit down thinking I'll post here, but when it comes to it, the energy just isn't there. It's been a long day in the garden. Or maybe I've failed to get the picture that I wanted to share and now it's too late for it. All this nature/garden stuff passes by with the speed of a bullet and the force of a speeding freight train. I sometimes feel as if I've been hit by that freight train. Didn't June just begin? Now we're suddenly well into July. Before you know it August will be here and I'll be in a frenzy dealing with tomatoes and green beans.

So on this Sunday morning I'll get this one post in with a quick update and a couple of photos.

This morning, while it was still cool, my husband and I walked down our driveway and back (a total of a half mile, it's long for a driveway) and the spirits were rising from the pond. I'm not sure whether the mist rises because the water is warm and the air is cool, or vice versa. I do know that when the sun pops over the trees on the hill and hits the water, the spirits/mist rise up even more dramatically than can be seen in the above photo (taken at the end of May). Spirits rising from the water to greet the day. Water spirits or Air spirits? Does it matter?

As is usual, the water level in the pond is lower than when the photo was taken. By late fall -- barring any deluges between now and then -- the water in the pond will be just a memory. We could attempt to fix the leak again, but that would be thousands of dollars and no guarantee. Then we'd have to do something about the trees actually growing on the dam. No, the trees aren't causing the leak. It was doing that while they were barely noticeably seedlings. I'd love to keep the pond intact. But it's a good lesson in transience and the impermanent nature of all things. We're cool with that.

All good things (and bad things) come to an end, eventually. So I'll end here and share other goings on in another post. Ah yes, something to look forward to.

Posted by Sandra M. Siebert at 9:18 AM No comments: