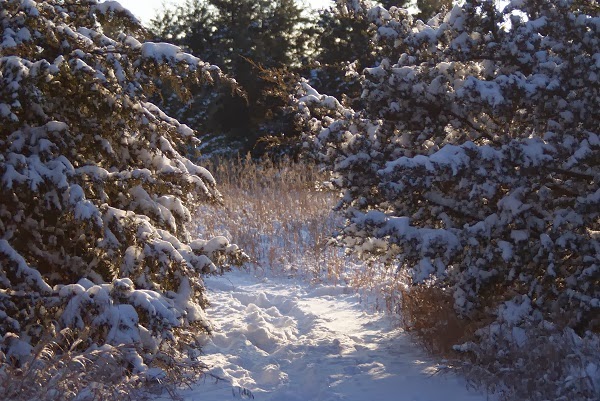 I'm back again. You would think that the winter lull would see me furiously posting here as I try to fill the time. However, I've sort of been avoiding blogging. I kept feeling that I really should be doing something more constructive, more tangible in my daily life.

But instead of tackling some of the larger tasks, like eliminating the pile on my sewing machine table or reorganizing the junk in the attic, or reorganizing the sewing room, I've settled on smaller, less satisfying tasks. I will leave you to speculate what that says about my frame of mind during the first part of winter. I will simply say, I'm better now.

Not that I've tackled the mad sewing and reorganization tasks. Yet, I have taken on another project that I at first had to abandon because other things took precedence and then, when time became available for it, avoided. One of the reasons for my sense of being lost is that I never got into the habit of making weekly and daily to-do lists for winter projects. I keep myself on track with outdoor tasks by making quite ambitious lists, but failed to maintain this once I was forced inside by cold and snow.

Garden work this winter mainly consisted of protecting the winter crop of kale, collards and lettuce. As the first bout of real cold loomed, I abandoned the lettuce patch, harvesting all that was usable, then removing the plastic tunnel and adding a layer of straw mulch. Two beds of kale and collards were protected by layers of sheets and blankets, as were some cabbages and young lettuce plants.

When forecasters warned of the polar vortex, which dropped the temperature to about 10 degrees below zero Fahrenheit one night, I harvested the largest kale and collards leaves, tucked everyone in and hoped for the best, but expected the worst.

Almost immediately after the polar vortex retreated, we experienced a lovely thaw (the above snow, actually from two or three storms ago, is now mostly a memory). High temperatures climbed well above freezing (in the 60s yesterday) and I pulled back the protective coverings to give whatever survived a little sun on their leaves.

It was quite heartening to see that everything looked as perky and alive as it did before the vortex stretched its icy fingers into our realm. Now we can truly look forward to an early crop of greens.
﻿
In December I spent time assessing my stash of seeds and making lists of those that I need to buy, as well as making a fresh copy of my garden map. This month I started ordering seeds and already have received two orders and am waiting on a third. I've still got one or two seed orders to place then I must concentrate on ordering fruit trees and shrubs. Another list of seeds and plants will be purchased locally.

This year I am trying out new (to me) varieties of kale, including White Russian Kale, which one catalog said is even hardier than my favorite, Red Russian. Other new varieties include Beedy's Camden and Winterbor. Of course, I will still plant plenty of Red Russian and Tuscan (aka Dinosaur and Lacinato). The Beedy's and Winterbor may wait until fall, though, as they were recommended as particularly winter hardy.

New spinach varieties will include Space, Giant Winter (which I think I've tried once before under the name Gigante d' Inverno) and Winter Bloomsdale. My husband thought that we ought to try different varieties since I have had terrible trouble getting the spinach to germinate. He thinks a different variety; I think I'm just doing something wrong. Everyone else, including a local market grower, raises the same variety I've been working with, Bloomsdale Longstanding. These other three were recommended by Mother Earth News for winter production, and I like to accommodate my husband's wishes anytime possible.

The orchard is another area of experimentation this year. After one friend brought us fresh jujube fruit (NOT related to the candy) from his very own tree and another brought us dried jujube fruit from New Mexico, we decided to try this hardy fruit tree ourselves.We are quite excited about this prospect and have even touched on the possibility of doing jujubes as a cash crop. But I will further discuss this apparently amazing fruit tree in a later post. Now I must open the shades to let in the first sunlight as it tops the trees on the west. Then plan my day: some writing, perhaps a visit to both bee hives (fodder for another post), some more writing on another project, and who knows what else.

See you later, not too much later, I hope.

Posted by Sandra M. Siebert at 8:06 AM No comments: