Nothing quiets the soul like walking through the falling snow, especially when the world is already hushed beneath a blanket of white and the wind is calm.

It is as if you are wrapped in a dime store snow globe, all on your own. Your personal, magical world. 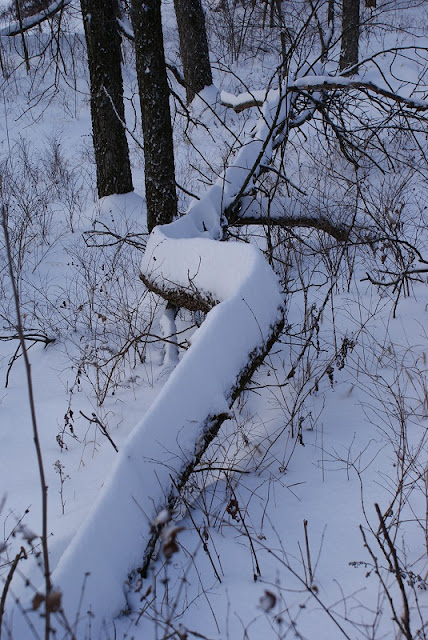 Such an easy metaphor when one walks in nature, away from the city rush and scurry. However, I have also noticed that phenomenon in small towns at least -- I haven't spent that much time walking in cities during a snowfall.

The snow muffles traffic sounds and seems to put distance between you and the other voices of the town. The air always seems warmer when snow falls, I have noticed.

As snow fell on Thursday afternoon -- a light snow, after the heavier stuff of the morning left a foot of white -- I walked down the hill and across the empty pond hole. The snow was nearly to my knees and I had to lift my heavy boots high to walk.

The hood of my coat had fallen back and I was warm, even sweating, from the exertion of shoveling snow and taking a walk down our long driveway to see if, perhaps, the mail carrier had made it through. No mail. The road had not yet been plowed, although I saw a large pickup drive by, twice, its road noise softened by the snow.
Snow collected in my hair, melted and refroze. The hair hanging down by my face was crusted with ice. I walked across the empty pond, up to where a spring once flowed to fill it. Then back I walked, another direction across the crater and into the strip of woods, on the other side of which was the driveway. At one point I sat in the deep snow, feeling weary from the shoveling and walking. Walking through deep snow makes the effort more challenging -- good for the thighs though.
The cold of the snow seeped slowly through my insulated overalls. I felt cozy, the snow conforming to my body's shape, making the most comfortable seat I've ever had. Meditation, contemplation as the light snow fell around me. Then into the woods, where I encountered the rose thicket that has surprised and delighted me the last few summers by sporting pink beacons of joy in the June woods.

Then on to the driveway and up the steep hill -- not quite done yet, though weary. I traipsed into the cedar grove, feeling the group of Sanctuary Trees envelope me with their protective embrace. The snow was pristine and unmarked.
The next day I took the camera out to capture some of the scenes I had found during the snow. Rabbits and birds had left tracks everywhere, shallow tracks because the snow was firm and a crust of ice had formed early on Thursday when a light freezing drizzle fell. No deer tracks, yet. I kept the track making at a minimum because three granddaughters would arrive on Saturday. Let them have the joy of being the first to break the sparkling snow. Nothing brings out the child in all of us like deep snow on the ground. We trudged, built things, went sledding down the hill.

Saturday and Sunday brought much thawing, although the snow remains fairly deep. Today we wait for the next storm to arrive -- possibly another 12 inches, they say. Snow loses its charm after so much time of poor travel conditions, wet and mud and so on. But after two very dry years, I welcome this late winter snow. It will bring much needed moisture to the gardens and orchards. It won't be long before my baby cabbages will go into the ground and I will plant rows of snap peas and snow peas, kale and collards.

Without warning, summer will set in and the tomatoes and peppers will be in bloom. Such is the turning of the seasons. 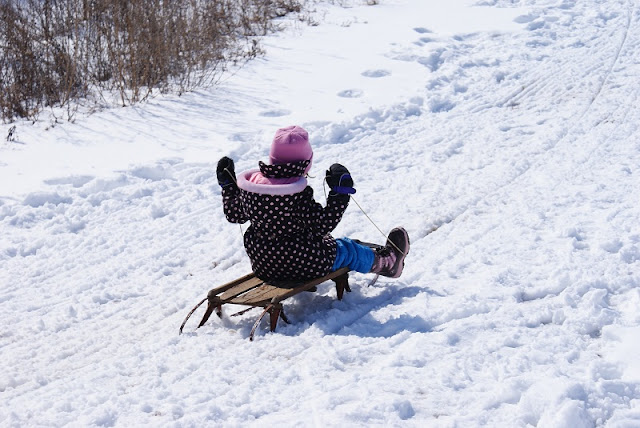 Posted by Sandra M. Siebert at 9:04 AM No comments: 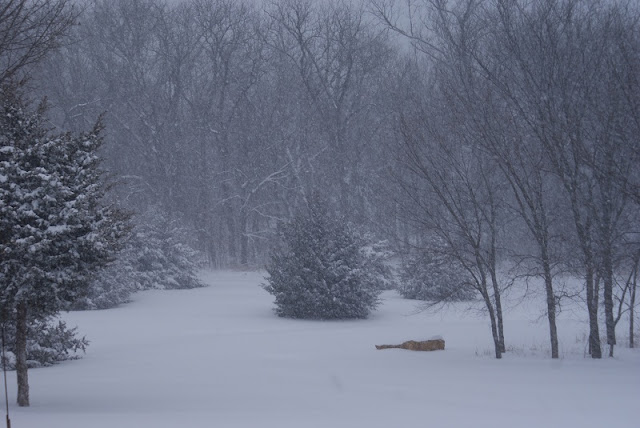 Not much to say but that it is snowing. This scene was how it looked at about 10 a.m. today. Piling up and still coming down. We'll work on the walks and the driveway throughout the day so that we aren't trying to push 12 inches of snow all at once.

Cozy fire. Lots of food in the pantry. Nothing to do but enjoy.
Posted by Sandra M. Siebert at 10:06 AM 2 comments: 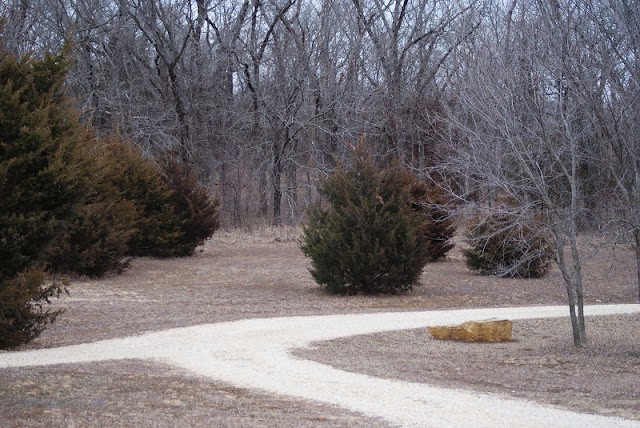 We are just a few hours from a major snow event. Places west of us have already received nearly half a foot of snow. We could get 12 inches or more...

This will be the first really major snow event we've had since the winter of 2010-11. A few weeks ago we did have snow and blowing, which made travel difficult and treacherous, but the snow did not measure up to much.

Above is the current scene as viewed from our front porch. Tomorrow it will look much different.

After two dry years, the snow will be much welcome -- all the more so that neither of us has to go anywhere tomorrow.

Bring on the snow.
Posted by Sandra M. Siebert at 5:49 PM No comments: 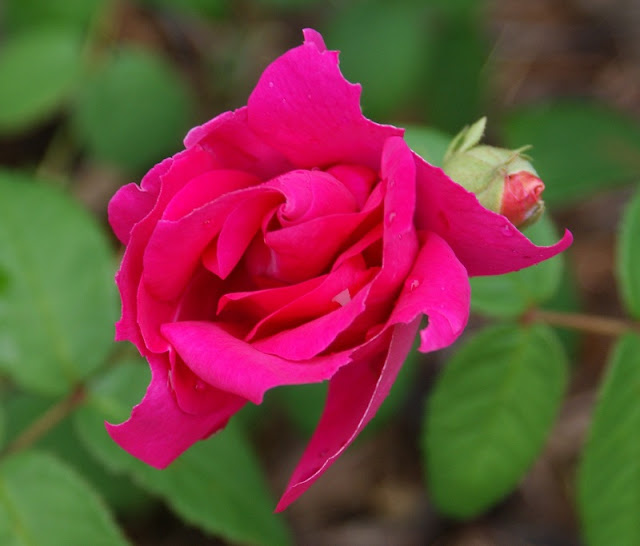 It's Valentine's Day, or the Feast of Aphrodite, whichever you prefer.
So almost everyone with anyone special is thinking roses.
It got me to thinking about roses, too, but not those long-stemmed beauties I saw for $60 a bunch in the grocery store yesterday.

I am thinking about the type of rose pictured at the top of this post, the Apothecary Rose (Rosa gallica), also known as the Red Rose of Lancaster. As you can see, it is actually a bright pink, but in roses, pink is red and.... well, if  you are really interested, a friend of mine is obsessed (a mild term) with roses and can do the rant much better than I can.
This rose was the emblem of the family on one side of the War of Roses that began at the end of the 14th century. It was not a war about roses at all, but a war over who would get to sit on the throne of England. The Lancaster family and the York family both claimed the right to put an heir under the crown. The York family's emblem was the White Rose of York (R. alba, see link for photo), hence the name, War of Roses.

While many newer rose cultivars have minimal or no fragrance, the much older cultivars and those called "species" roses, because they have minimal "improvements" bred into them, have good deal of fragrance. Not all "rose" scents are alike. They vary as widely as the forms of the rose. To capture the fragrance of a rose, pick it early in the day, preferably just before it opens. Once the rose has been visited by bees and thus pollinated, the scent disappears.

The above "white" or pale pink rose, the Souvenir de la Malmaison is new to my flower garden, given to me by the above-mentioned friend with the rose obsession. Because it was new last year, it received some watering priority during the summer drought and rewarded me with numerous late blooms. It seems quite hardy. Before the middle of the 19th century, this rose (one of the "Bourbon" roses) had some name with the word "Beauty" in it. When a Russian duke gathered a start from Josephine's Malmaison grounds and took it to be planted in the gardens of St. Petersburg, it became a Souvenir. Roses are so loved that they have quite an interesting history.
You've just scrolled past another new rose -- new to my garden and a newer variety without the historical stories. I don't know its species, and its fragrance is slight, but it has a lovely bloom and an appealing name, Hot Cocoa.

The photo at right is a beautiful climbing rose we installed in the front of our house last year, called Don Juan. Minimal fragrance, but lovely, lovely color. It kept blooming late into the season.

This adorable little red rose (below) is called Red Mini Mo. It is a miniature rose that stays truly miniature, barely exceeding 8 inches in height at maturity.
At the back of my garden, I have a red miniature climbing rose (which I think I have featured in photos here before) that is miniature only in its flower size, for the canes can get 10 or 12 feet long without pruning. I believe it is called Magic Carousel. 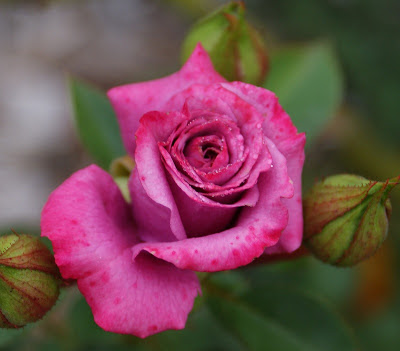 Finally, here is another miniature rose with an unusual lavender-like color. I cannot remember its particular name, but it is one of the Blaze series of miniature roses. It has no fragrance, but I love its color. And it has survived several transplantings.

Unfortunately, the only roses I have that have a notable fragrance are Souvenir de la Malmaison and the Apothecary Rose. My collection is not yet complete, however, if my rose obsessed friend has anything to say about it. So I imagine that at some future date I will be raving about some fragrant rose newly added to my "estate." If you are going shopping for roses this year, do so while they are in bloom so you can pick the fragrance(s) that most appeal to you,

On the issue of honey again....

Saw this article about dangerously contaminated honey being illegally imported into the U.S. It is a long read, but worthwhile. The moral of this story is, "buy local honey." If you can't buy local honey, at least don't go for the cheap stuff. Spend more and support the companies putting out the effort to insure that they are getting honey from safe sources.

Here in America we expect cheap food. Yet that hankering for cheap food (so we can have lots of money to buy lots of other cheap crap that we don't need) has caused the quality of our food to deteriorate. Cheap food isn't always a good thing.

I understand that for many people, the issue isn't buying other crap, but simply having a pay check that covers the food bill and the rent. Our policies, then, should be in finding ways to make sure everyone gets fed high quality food, not simply making it cheaper by rewarding companies that offer us food full of toxins.

Maybe subsidize vegetable and fruit growers? Maybe subsidize organic growers? Right now, the farm subsidies don't really go to those who produce food that goes directly to the consumers, but is often used as livestock feed or in highly processed foods, which are part of the reason for the epidemic of obesity and type II diabetes.

As consumers, we vote with our wallets. Don't buy the cheapest honey from companies that don't care what's in the honey. If we must occasionally go without something because safe stuff is unavailable or doesn't currently fit into the budget, then we must. If we want safe food, we, the consumers, must take action. Spend more on your food and less on dust collectors.