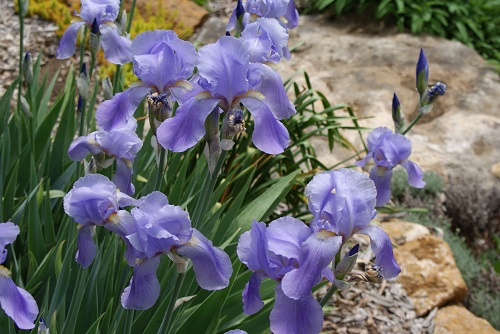 The sound of rain falling soothed me as I lay in the hammock on the porch last night. It brought just one tenth of an inch, but I was glad the storm did not entirely pass us by again. 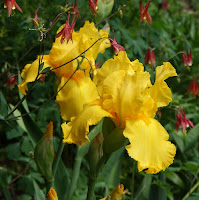 On Monday evening I headed to Holton (nearly an hour drive) to give a presentation for a garden club, and left early (just as refreshments were served) because of thunderstorm watches and warnings. I drove nearly halfway home in heavy rain, listening to reports of thunderstorm warnings -- complete with threat of hail -- for my area. As I drove I calculated that I would reach the warning area at about the time the warning was supposed to expire. So I was relieved I wouldn't be driving in quarter-size hail. 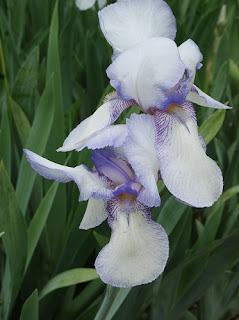 But alas, I reached the area to discover that no rain had fallen. I arrived home as a sprinkle spotted the sidewalk, and nothing more. I enjoyed the somewhat cooler weather that came with the storm system, but felt frustrated by the continuing lack of moisture. I tried not to let the lack of rain dampen my enthusiasm, but I'm not supposed to have to water regularly in May.

Get used to it, Sister. You're going to have to deal with a lot of "not supposed to" weather situations as the climate continues shifting. But the iris are in bloom, prettily colored and fragrant flowers named after the Greek goddess of the rainbow, Iris.

And the rain last night helped to soothe other wounds, where I've been rubbed raw by the idiocy that seems rampant in this world.

Thank goodness for rain and rainbows.
Posted by Sandra M. Siebert at 9:51 AM No comments: 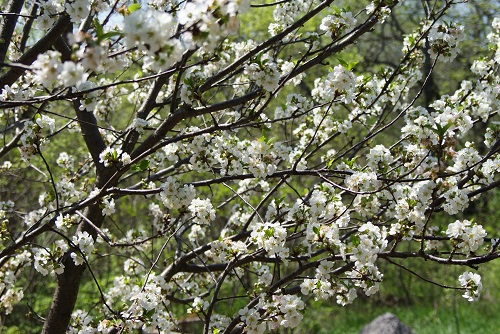 Ah, I think it's safe to go gardening.

At least I know what season it is...

Summer. And it doesn't look like that's going to change. Finally, a little stability.

The peas are starting to climb. The Montmorency cherry tree has burst into bloom. It appears to be safe to plant beans, maybe even the tomatoes. And we've had a little rain, with a little more in the forecast. Asparagus is popping up. We've survived third or fourth Winter (I lost track).

And I've finished the final edit on my book, so now I can spend the entire day gardening. Look out Weeds, here I come! 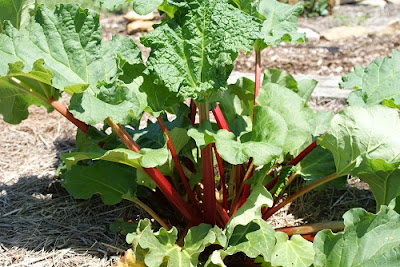 I cut the first rhubarb of the season yesterday. Actually, it was the first rhubarb harvest in years. I'd transplanted it from one place to another, and it just struggled to stay alive for a few years (it was probably the walnut trees that kept it from thriving). Now it's in a more hospitable place and thriving. It now has two tiny little companions from One Heart Farm. When I asked if they had any rhubarb, he said yes, he'd started it from seed just because he wanted rhubarb. He had them in little four-packs, but I really only wanted one, so I picked a four-pack that only had two. He quoted a price of $2, which I thought was extremely reasonable. Then he just gave them to me. I'll go back soon. I know I can find other plants I can't live without. 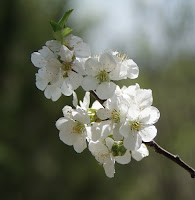 I don't know what variety the rhubarb is. It's got red stems. cute tiny red stems, and he said it is a European variety, "they're really focusing on pies." So maybe it's a bit less tangy than typical? It will be a few years before I can taste test, though. I'll have to do a bit of research on rhubarb, now.

Anyway... Yay, rhubarb. And yay, One Heart Farm in Lawrence. I'll have to do a blog about them, too, maybe.

Oh, and I missed Naked Gardening Day. That was yesterday, May 5. It would have been a lovely day for naked gardening. Next year.

Posted by Sandra M. Siebert at 9:05 PM No comments: