We had not yet arrived at the Summer Solstice when I made my last post, and now we are well ensconced in August. But a relatively cool August (mid- to upper 80s F.) with 3 inches of rain so far this month, unusual.
Following the strawberries featured in the last post, I picked what few black raspberries were produced, then tore out all my plants so I could start a new bed well away from the blackberries. Black raspberries suffer from a virus carried by blackberries, which show little to no signs of problems. So, sigh, starting over again.

The blackberries started producing shortly after I started picking black raspberries, and are still giving me berries because this is a primocane variety. Blueberries also started coming on at about that time and have just finished. I am happy to report that my freezer contains several bags of all but the black raspberries. These will serve us during the winter. Right now, we have moved on to other fruit.

We got a fairly nice crop of summer apples -- William's Pride, which ripens in August. The apples have had much less pest damage than we expected, since we did no protective sprays this year. I suspect that our late freezes had a little to do with the lower level of pest pressure. William's Pride apple store for only about a month, so we will need to eat, cook or dry them over the next few weeks.

As I frantically harvested and processed and gave away produce last week in preparation for being gone from Thursday through the weekend, I watched the melon patch. I ate a couple of small watermelons, but the cantaloupes remained green.

On Wednesday evening I went out to assess the lettuce and discovered about a half dozen orange cantaloupes in the bed next door. What was I going to do with all this cantaloupe? Refrigerator space was not available.

I made a produce run, delivering melons and cucumbers to friends. This seems to be an excellent year for melons, as the cantaloupes and watermelons are producing quite well. Cantaloupe varieties are Kansas (which has done well for me in the past), Old Greek (a football shaped melon) and American Melon, which has a longer (French?) name that I can't remember, but which means Green Fleshed Pineapple. When I cut open the first of these last ones to ripen, I was disappointed. It was green inside -- not ripe, I thought. But it was soft and fragrant and sweet-tasting. I looked at the packet and realized that all was as it should be. I'll talk about my watermelons in a later post.

And cucumbers. For some reason I had been under the impression my husband did not care if I made pickles this year, we had a few jars left from last year and did not seem to be eating them very quickly. So I planted fewer cucumbers than usual. Then a few weeks ago he decided that, yes, we should have pickles. (The son-in-law loves pickles we discovered and they can be expensive.) Not to worry, though. The few vines I had planted produced more than enough for pickles. Plus, I always plant succession, so more vines are coming into production.

Fifteen pints and eight quarts of vinegar pickles and 3 quarts of fermented pickles, plus 3 quarts of "quick pickles that can be eaten right away -- so far. I will give you my pickle recipe at the end of this post.

Tomatoes and eggplant also are quite prolific. The Amish Paste tomatoes will not be canned, but were planted expressly to dry, since I have plenty of canned sauce from last year and no dried tomatoes left. The eggplant also goes into my solar dehydrator to make eggplant chips, which can be tossed into soups or stews, but which we like to eat as snacks.

Some of the summer squash -- Trombocino -- also is being dried into snack veggies, as well as frozen for winter stir fries. Trombocino was touted as being less susceptible to squash bugs. Its fruit is long and curvy and end in a bulb. Tasty. Squash bugs have appeared and turned some of the leaves yellow or wilty, but the plants are doing well. I trained the vines up a trellis, as I did the Carnival acorn squash, which is suffering a little from squash bugs, but still producing. Perhaps the late frosts also reduced the squash bug population this year. I won't expect the same results next year, but I will try.

And so, that should be enough of an update. I've got okra and long beans, too. And the freezer has been nearly filled with an abundant crop of kale, but I will end here, with the pickle recipe, as promised.

All seeds should be whole. NOT ground. Wash and slice cucumbers and place into a container (I use a 2-gallon crock). Mix salt with 4 cups water and pour over cucumber slices. Place a plate on top and weight with a jar(s) of water so liquid will cover the cucumbers (don't worry, in a few minutes the slices will squish down enough). Let stand for 2 hours, then drain and rinse.
Sterilize 5 pint jars and keep hot in 200 degree oven. Mix water and vinegar in a pan, add garlic and bring to a boil. As vinegar/water reaches a boil remove garlic, add cucumbers and bring to a boil again. As you wait for the cucumber slices to boil, take out hot jars and place two pieces of garlic and 1 tablespoon each of dill seed (or two heads) and mustard seed in each jar, 1/2 tablespoon coriander and several peppercorns. Using a canning funnel, pack cucumber slices into jars, gently pressing down as you go. All slices should fit into the jars with at least 1/2 inch head space (space between cukes and top of jar). Then add vinegar/water to cover cukes, leaving 1/2 inch head space.
Wipe rims and threads clean, place hot lids on jars and tightly screw on bands. Process for 5 minutes in boiling water bath. Remove and let cool overnight before removing rings and storing.
If using quarts, this amount will fill just 4 jars with vinegar left over, so you can use more cucumbers (with proper amount of salt and water). Or do as I do and make quick pickles by adding seasonings and more garlic, cucumber slices and boiling for about 5 or 10 minutes. Place in containers and refrigerate when cooled. Use within two or three weeks.
To make hot pickles, add split or chunked hot peppers to vinegar water with garlic and remove when you remove garlic. Eliminate dill seed, but use mustard and coriander and peppercorns, with a sprinkling of cumin seed. How many peppers to used depends on the peppers and the amount of heat you desire. Divide peppers evenly among jars as you do the garlic. Then follow rest of directions. 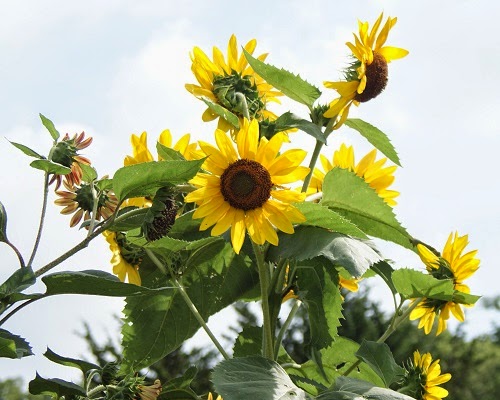 Posted by Sandra M. Siebert at 1:11 PM No comments: