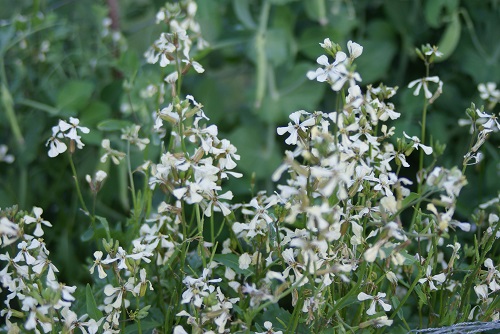 The garden daily brings me surprises. I wish they were all this sweet.

One does not usually couple arugula with sweetness. Its leaves add a pleasant, pungent bitterness to salads, something like mustard greens (to which it is related), but not quite. My first taste of arugula (20 years ago?) left me somewhat ambivalent. I wasn't quite sure if I liked it or not. But I've grown to love it and my garden is never without it. Indeed, if you routinely let it flower and set seed, just try to be without it.

It grows and tastes best when the weather is on the cool side, but with regular harvesting stands up reasonably well in the heat. Except it does bolt quickly when it gets warm.So I'll just go about smelling the arugula flowers. Imagine. 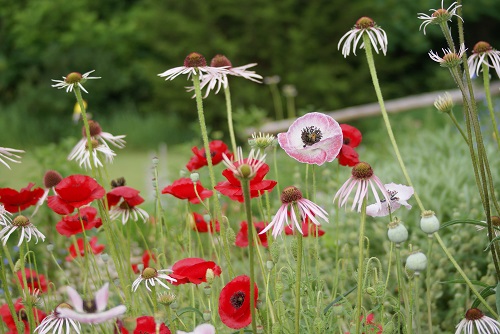 Poppies, so many poppies. We could call the Full Moon of June the Poppy Moon.

I so love these showy, brilliantly colored and varied flowers. The poppies shown above, playing nicely with the Echinacea pallida, are probably Shirley poppies (Papaver rhoeas). It's been so long since I planted the original seed that I have no idea which poppy breed they are, except that these look like Internet photos of Shirley poppies. But I also found other photos of "Shirleys" online that look different. They may simply be "double" cultivars. Double indicates extra rows of petals. Both the red and the pink are the same variety, as their colors vary greatly.

These are easy to grow and hardy annuals that must be planted each year.

I collect the bulbous poppy seedheads when they turn brown, and shake out the seeds once they're fully dry (or, more likely, I'll just let them sit in a plastic container or a paper bag and the seeds mostly fall out on their own). In early spring, or even late fall I'll scatter the seeds...
Except, I don't always. Many times late fall and early spring pass by and the seeds are still sitting in their containers... which is what happened this year.

Fortunately these poppies self-sow rampantly. Their vivid blooms scattered among other blooms and greenery make a wild and lovely show.

The most famous -- or infamous -- species of poppy is Papaver somniferum, the opium poppy, which is the same species of poppy used to produce the seeds on your poppyseed bun. Opium production requires making an incision in the seed head, which then secretes a milky sap. The sap is left to dry until the next day, when it is scraped off. Production of opium seems like a very labor- and time-intensive activity. More effort than I'd want to go to. It's much easier just to shake the tiny black seeds from the pods and use them in baking. Tastier, too. And less likely to get you in trouble with the law.

Some countries outright outlaw this poppy species and its extracts. Some require a license to grow them for legal medicines. Others have no laws ruling growing of these poppies, as far as I can tell. The U.S. allows these poppies to be grown for seed and ornamental purposes, but it is illegal to produce opium from them (naturally). At least that's how precedence stands. You can easily find seed for bread seed poppies and grow your own for baked goods, or just for their beauty.

It was probably a field of P. somniferum that Dorothy found herself walking through on her way to see the Wonderful Wizard of Oz. The fumes from the poppies put Dorothy, Toto and the Cowardly Lion to sleep. Of course, the Scarecrow and Tin Man, not having to breathe, were unaffected. Their method of escape from the deadly field of poppies differs between the book and the movie. However, it's doubtful that one will be affected by the narcotic effects of poppies just by walking through a field of them.

The opium poppy, as many powerful medicine plants, features in the myths of the Mediterranean region, their native stomping grounds. The most commonly known myth (at least to me) is that the Greek Goddess of the Fields, Demeter, created the opium poppy when her daughter Persephone went to live in the Underworld. The poppy helped her sleep. It also became the symbol of Hypnos, the God of Sleep, and his brother Thanatos, the God of Death (eternal sleep). The son of Hypnos, Morpheus, God of Dreams, also claimed the opium poppy for his symbol and the word "morphine" was derived from his name. 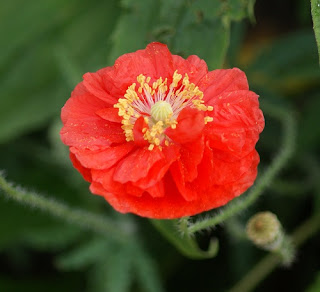 The Shirley poppy was earlier known as the corn poppy, as it grew in the grain fields, and also was sacred to Demeter. Another epithet for this species is "Flanders poppy," and it now symbolizes remembrance of those whose lives were lost in war.

Other poppy species also exist, including a few perennial and biennial species. There is the California poppy, and this lovely orange, but unknown-to-me species (at right). It came in a bag of seed for "bee flowers." I think some California poppies might have been in that bag, too, but I see none blooming now. 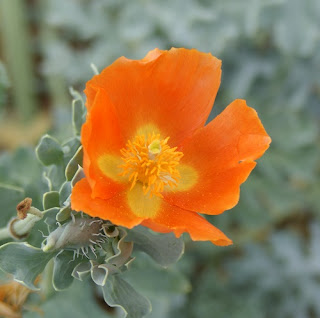 And finally, I have this lovely horned poppy, also known as sea poppy (Glaucium flavum) because of its love for the seaside. I gathered seed for this plant from one growing in the xeriscape demonstration garden at the Extension office. This species also produces bright yellow flowers, as well as these lovely orange ones. Xeriscape is a term for low moisture gardening. So it should work well in arid conditions, as its blue green foliage suggests. It is native to Europe, but seems to do well here. Apparently this is a short-lived perennial, so I must gather seed from this three-year-old plant if I want to be sure of enjoying its blooms year after year. The seedpods are long and pointed, unlike the bulbous pods of other poppy species, which gave it the name "horned" poppy.

Enjoy Poppy Moon, you all.

Posted by Sandra M. Siebert at 8:44 PM No comments:

I walked down to the pond a couple of mornings ago to watch the spirits dancing across the surface of the water. Other people might call it mist, but I see beautiful spirits. It was in the last days of May and the mornings have still been cool enough for the spirits to rise from the water. 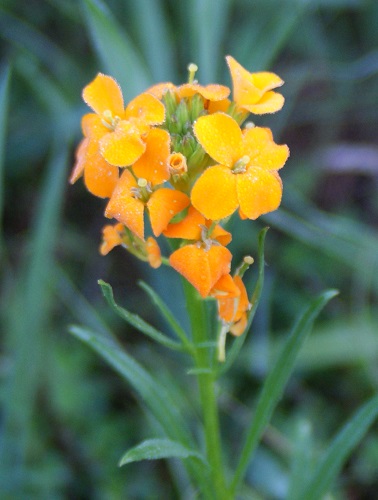 As I walked back to the house I saw something orange at the edge of the mowed area. Upon investigation I discovered this lovely wildflower. Consulting the "Kansas Wildflowers and Grasses" Web site I was able to identify it as Western Wallflower, Erysimum asperum, a flower I had not encountered before -- that I know of. It most frequently occurs as a bright yellow instead of this lovely orange yellow. Later I went searching for additional information on "western wallflower" and encountered numerous sites referring to Erysimum capitatum.

Surely the Kansas Wildflowers and Grasses Web site doesn't have the name wrong. Well, it doesn't. Further searching revealed that both species are referred to as western wallflower. Indeed, both species might actually just be one species. No matter how much the classifiers fiddle with things, confusion still remains.

Anyway, both species are members of the mustard family, aka Brassicaceae, the same family to which cabbage, broccoli, mustard, and so on belong. The evidence is in their four-petaled flowers, which initially caused their family to be called Cruciferae, referring to the cross-shape of the flowers.

Another new flower friend. I wonder if it will be possible to catch its seed and scatter it in the flower bed, and if its possible for me not to pull and resultant seedlings as "weeds."
Posted by Sandra M. Siebert at 11:09 AM No comments:

Turtle in the Garden 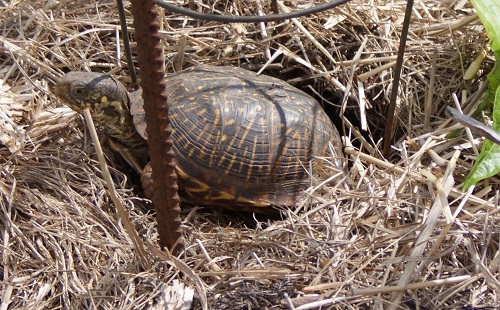 Something has been digging in the garden...
Just holes in the wood mulch here and there, and some spots where the hay and straw mulch on the sides of the raised beds has been pulled away.
One morning I discovered the hay mulch messed up over an entire 30-foot bed, with areas of disturbed soil

I wanted to blame the rabbits. And I did.

Until I found the lady pictured above sitting cozily inside the three-ring "tomato" cage set up to support a pepper plant. She just shoved pepper plant over (it was easily righted later, so no harm) and plopped her round hiney into the soil. Presumably she laid eggs, or at least tried.

I don't know that any of her eggs hatched last year. At least one of the nests she planted in the garden got dug up by something with a taste for turtle eggs. That predation and the fact that they produce few eggs at a time means the ornate box turtle has a very low reproduction rate. I hope she has better fortune this time. I will be anxious to see whether any quarter-size turtles appear in about two months. How to protect the babies from hungry critters, I don't know.

Box turtles are unique in the turtle world in that they live their lives on land, not in water. Doesn't that make them tortoises? Apparently not, according to the people who classify things. It has something to do with the shape of their feet and other body parts, I gather. Anyway, once this lady is done laying eggs, the mysterious digging will cease. The bed she dug up has been put back into order. None of the seedlings that had already sprouted were disturbed and where no seedlings had emerged I replanted. No harm done.

I won't hold a grudge against her and I'm glad it wasn't the rabbits doing the digging. I really don't want to put up any more chicken wire fences. I've already got the strawberries permanently surrounded, and temporary fences around the peas, beans and sweet potatoes.