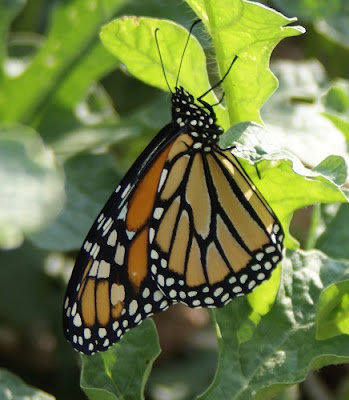 I discovered this beautiful lady resting among the watermelon leaves yesterday morning, perhaps only just barely able to flutter there after fully opening her wings.

Just one green chrysalis left hanging on the porch wall. It seems to bulge a bit in certain places. Maybe tomorrow the last will be on its way.

Posted by Sandra M. Siebert at 2:59 PM No comments:

Slipping into the Fall First radishes of the Autumn garden.These aren't sweet little radishes, they have a spicy kick. They'll battle with the mustard greens in my lunch time salads.
Kale is in the forecast, looming large, nearly bursting through the white row cover low tunnel.

Yesterday I worked on the patch containing lettuce, Napa cabbage and bok choy. Some of the rows were crowded in spots. So I thinned a bit, carefully digging up some of the extras and replanting them in bare spots in the rows. And I replanted seed (again) in the half of the lettuce row that never germinated. I'm hoping for better luck now that it's a bit cooler and, perhaps, a bit damper.

That allowed me to use up what was left of three packets of lettuce seed that got left out in the rain. On Thursday night we got nearly 3.5 inches of rain, at least half of it falling in 45 minutes or an hour. The chipped wood mulch on the garden paths washed badly in the heavy downfall. After the rain lightened a little, I headed to bed, grateful to lay my sleepy head on my pillow. As I relaxed into my bed my brain fell on a forgotten fact: I had taken a basket containing seeds that I intended to plant out to the garden early that evening, but spent my time out there on other tasks. The basket did not get brought back inside.

So I pulled myself out of bed and grabbed an umbrella. The basket and its contents were soaked, caked with mud on the bottom. I pulled out some newspaper and opened the soggy seed packets, emptying them onto the newspaper. Surprisingly, a lot of the seed was still dry. But it's all going to get planted, just to make sure it doesn't deteriorate from dampness. So there will be lots more radishes and salad greens in the fall/winter garden.

Summer vegetables continue providing bounty. My freezers are nearly full, meaning I must find some other way to preserve the crops. Tomatoes shrivel in the dehydrator and the stash of canning jars thins as I frantically make vinegar pickles with cucumbers, green beans and long beans. 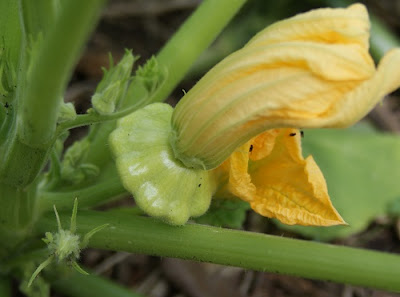 In the south garden, a hill of summer squash grows, showing its first little scalloped fruit. Squash bugs took out all the other squashes planted earlier -- mercilessly taking down very young plants. I commiserated with a grower at the farmers market one Saturday and she said they usually plant a crop, then later plant another crop well away from the first. The first crop gets wiped out once the squash bugs overtake it, and the second crop is safe -- for a while. So I planted what was left of my summer squash seed in the south garden, probably 100 feet away from the north garden plot. I planted them near some healthy datura plants that had "volunteered" there, hoping its fragrance would overpower the scent of the squash plants. So far, so good. Doesn't this baby squash look lovely?

Monarch watch: Two beauties have flown, leaving behind the empty chrysalis skins. Another chrysalis has darkened, I hope as another butterfly prepares to emerge. Several green jeaw 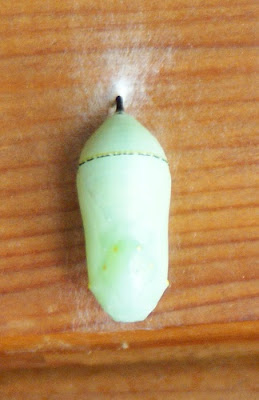 But that's only part of the miracle. The Monarch adults emerging now will live much longer than the usual three to five weeks. They will take to the air for a flight covering thousands of miles, heading toward the mountains of Mexico, where they will spend the winter. In the spring, those that survived will head north, laying eggs all along the way. We might see Monarchs during the summer, as adults pass through and as their offspring metamorphose and follow their parents. Most of the original butterflies will not make it all the way to their northern origins. However, each female lays and average of 100 to 300 eggs (and up to 1,000), so plenty of young ones will follow.

For the past week or so, I've often encountered the black, white and yellow-green striped Monarch larvae heading down our sidewalk on the way to a suitable spot to pupate (create a chrysalis and make the "big change." Now, more than half a dozen of these gems adorn the siding on our front porch.

They've chosen that location because it is quite close to a patch of tropical milkweed that I planted in the spring. The plants are now mere skeletons, having been stripped of every leaf and flower by the voracious caterpillars.

Unlike other instances, I'm not complaining of about these garden plants being devoured by some critter. I put the milkweeds there expressly for the purpose of serving as food for Monarch larvae. They feed exclusively on milkweeds, taking on the toxic cardiac glycosides within the plant, which in turn makes them poisonous to other critters that might eat them -- at least to birds, frogs, reptiles and mammals. Other insects, viruses and bacteria are not daunted by the toxins.

Something apparently affected a few of the caterpillars that crawled up our porch wall, as they turned black and shrivelled after attaching themselves with a little patch of white silk. 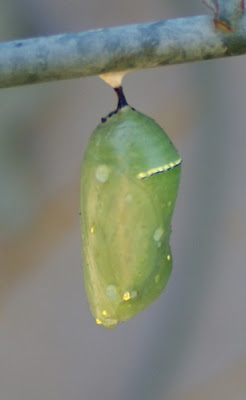 Clouds of thousands of Monarch butterflies can sometimes be seen as they head south during the fall migration. But their numbers have fallen dramatically in recent years. Overuse of pesticides, possibly GMO crops, and particularly the loss of milkweed populations, as well as numerous other factors, have all contributed to their decline. During the southward migration, Monarch Watch leads tagging efforts for study of these butterflies' routes and longevity of individuals. This weekend, the local Monarch Watch waystation will host an open house with a tour of the butterfly garden, numerous activities, all kinds of weird insects on display, tagging of Monarchs in the butterfly house, and, of course, a display of the butterflies and their larvae. It's a great time for kids. Our granddaughters got a lot of joy out of being allowed to handle Monarch and other butterfly larvae during the event two years ago.

We can help bring back the Monarchs by planting milkweeds, particularly species of the genus Asclepias to give the larvae a place to dine. Many other sorts of nectar producing flowers that bloom during the migratory seasons will provide sustenance to the adults making the arduous journey.

Why is it important to save the Monarchs?

If you've ever seen thousands of them resting in a tree during migration, or simply watched one flutter by and been awed by the beauty, you would know.

Posted by Sandra M. Siebert at 1:48 PM No comments:

The best thing about July through September is the wide variety off foods available fresh from the garden.

The Solonacea family -- tomatoes, peppers, eggplant, tomatillas, and probably others I'm not thinking about -- really come into their own by late July. Cucumbers flow off the vines in a veritable torrent. It's pickle season! If I've manage to hold back the tide of squash bugs, summer squash is on the menu. Green beans, long beans, red raspberries, the second wave of blackberries, pears, early apples, peaches, melons... along with summer arrives a rainbow of luscious foods.

Rainbows -- pots of gold and leprechauns, unicorns, fairy tales, the end of the storm and hope for calm weather, and your diet. When you go looking for information on a healthful diet, a common theme is "eat a rainbow." Choose foods or a wide variety of color -- yellows, oranges, reds, greens, blue/black -- every day to obtain a wide variety of essential vitamins, minerals, antioxidants and other nutrients. That means eating a wide variety of fruits and vegetables every day, not just the same thing.

We do eat "the same thing" for lunch pretty much every day. The meal consists of a colorful array of fresh, in-season vegetables. And flowers. Many flowers are not just edible (meaning, non-toxic), but add a bit of flavor along with the color. While adding a few colorful flowers to our salads might not add lots of phytonutrients (which are tied to the substances that create the colors in plants), but our thought is that every little bit counts.

And what else can make an ordinary salad extraordinary and exotic than a few flowers tossed among the veggies or scattered across the top.

At this time of year nasturtiums rule the garden. I planted them among the vegetables to make use of otherwise bare space and so I can have a plentiful variety of colors, from creamy white to deep red, with lots of yellow and orange in between. Nasturtiums are fairly easy to grow, especially in the richer soil of a vegetable garden, and beautiful. The leaves are edible, as well as the flowers and immature seed pods. They provide a spicy pop to salads, and have a deep enough flower to stuff with small amounts of guacamole, cream cheese, etc.

During an herb study meeting I learned that you can eat many more garden flowers than I knew. Learning that you can eat gladiolus really excited me. They add such an exotic flair when laid across the top of a salad or used as an edible garnish for any dish. They "taste like lettuce" according to one publication, meaning they have a very mild flavor but crispy texture. Chives and garlic chives also make lovely additions to meals, adding oniony and garlicky flavors, when tossed into a salad or strewn across the top of another dish. Dandelion blossoms,  sunflower petals, immature sunflower buds (cooked like artichokes), rose petals, daylilies, redbud flowers, pansies and other violas including wild violets, and the flowers of virtually every culinary herb (sage, thyme, etc.) can be used, as well as many others.

The Colorado State University Extension Web site has a nice list of edible flowers. The Thompson and Morgan online catalog also has a good list with some descriptions of flavor how to use. Don't eat any flower that you can't find on an "edible" list. At best they taste nasty, at worst they could be toxic. Check out the edible lists and look at the flower garden with a new eye. Then make each meal a veritable rainbow -- without the unicorns, but with the pot of gold in beauty, flavor and nutrition.
Posted by Sandra M. Siebert at 11:00 AM No comments: