It's raining this morning.
A blessed welcome rain.
It has been a dry spring so far.

With the roof now washed clean, we will hook up the rain tanks and start collecting water. Preferably, we won't need it, but it's Kansas, and July and August can get terribly hot and dry, even during what were once considered "normal" years.

﻿ We've been paying lots of attention to our fruit trees lately. Most of them are blooming, or have bloomed. The apricot (of course) bloomed too early to escape the last freeze. And it was a hard freeze that we thought might kill all of the flower buds. However, the apples, pears, plums and cherries are blooming, drawing in all the small pollinators.

Peas are popping up, with large gaps in the rows of earliest ones where many seeds simply did not germinate. The cutworms are back, but they seem to be willing to leave me a few peas this year. I put out some damp bran mixed with a bit of Bt to thin the cutworm herd (then went back to my source for the recipe and discovered I should add molasses, as well). Whether that has helped cut the cutworms, or whether the harsh winter reduced their population, I don't know. All I know is that (most likely) I will have peas this year.

On my last post, Leo Posch left a comment advising me to use strips of paper to wrap the lower stems of transplants to thwart cutworms, which cut through the stems, often leaving most of the top portion lying on the ground to die. That's not a practical solution for pea or bean seedlings because they are so numerous and are generally attacked when they are too small for this method. However, I will do this on my tomato transplants instead of using cans and the cardboard rolls inside paper towels and toilet paper. It's a much more practical solution and probably will work even better. 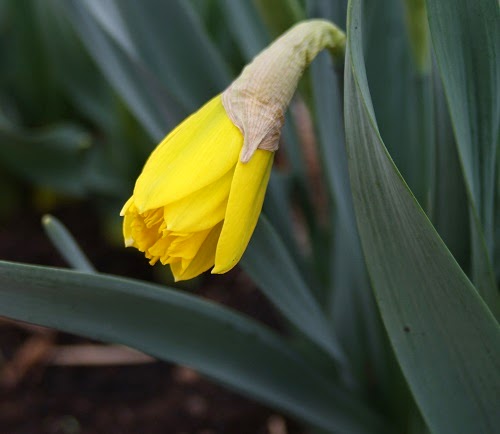 The honey bees have started their spring work with a loud buzz of activity. Both colonies seem to be healthy and thriving. We've put the honey super on one of them, but must acquire a queen excluder before putting the honey super on the other one. We don't want the queen laying eggs in the frames from which we'll harvest honey.

The large stones at the bottom of our flower garden terraces have many indentations that collect water. In years past, we've tried to sweep the water from the rocks to avoid mosquito propagation. However, the honey bees have gathered at these water holes by the dozens. (Photo later.) Like all creatures, they need water, too. So now we are trying to keep some of those indentations filled, a challenge in this warm, windy weather.

The daffodils are beginning to fade and the tulips are bright and cheery. And now, rain.
It's a lovely spring day.