Preparing for the Heat 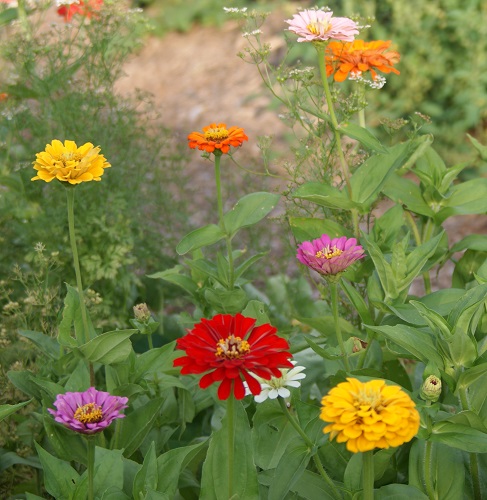 I've spent a good part of this week so far watering food plants in preparation for several days of high temperatures near or at 100 degrees. I will continue to water something every day. The blueberries will need water every day until the temperature moderates. Everything in pots will need close watching.

My new schedule has me outside early and quitting about 1 p.m. before the heat hits its high. I came in today at 1:15, my clothes soaked as if I'd jumped in the pond. The temperature was 95 degrees F. Too sunny, too hot, too humid. Drink lots of water, folks. It's hot out there. And it will get hotter.

I'm not going to complain, though. It is July in Kansas. We've been fortunate so far. I worked under a cloud-covered sky this morning, which was nice. It was only 85 degrees then, but the beating sun can make even that temperature a shirt soaker. So the clouds were a nice touch. Thank you, Universe. And just when I went in for brunch at 10 a.m., a surprise shower began to fall. Nothing measureable, but it felt good to have rain.

What Kansas is experiencing this week is nothing compared to what other places have experienced. It's not supposed to be in the mid-90s in Alaska, but it was. Last summer (which occurred during our winter) Australia had an incredible heat wave.

And yet people seem oblivious to climate change. But I see it. When you keep your eye on the ramblings of the season as closely as I do, you know when things fall out of whack. And they're out of whack. I know it's a difficult thing to face, but if we're going to make changes that will make a difference, we must face it.

Start by calling your Congress Critters and asking them why climate change, the Climate Crisis, isn't front and center. Why are we allowing bee-killing pesticides to be sprayed over large areas, and toxic crap to be dumped into water? Why aren't we pushing solar and wind power and making changes? Why isn't my grandchildren's future important? Why are we busy manufacturing a crisis at the border instead of dealing with a real crisis, climate change?

But what can I do as an individual besides yelling at the Congress Critters? Plant trees. Look for ways to reduce your carbon footprint, such as driving less, turning off electronics not in use, eating less meat, buying local produce... We do what we can and hope for the best.

Depression over climate change and the potential lack of any real future is a new thing among young people. I have struggled with it. There is every possibility that, barring a large truck bearing down on me, I could be around for another 30, even 40 years... if climate change doesn't make that impossible. I want every possible moment of life. I want my grandchildren to have every opportunity for a good life. Climate change isn't some conspiracy theory. It's real.

So, enough. I don't like to get preachy on this blog, but we really should be yelling at the people in charge about this. We're supposed to be in charge, but... no I won't go there.

Tomorrow I'm not going to worry about it. I'm just going to do what I can do. And enjoy life as much as possible, regardless of the forecast.

I'll enjoy working in the garden in the morning and whatever indoor projects need to be done in the afternoon... I'll bundle and hang the garlic to dry, watch the cucumbers fermenting on the counter, work on a presentation I have to give on Saturday, vacuum the floors (let's not get crazy now)... Focus on the Now.

For Now I only have to deal with a week or so of high heat. I'll deal with the future heat when it arrives.

Posted by Sandra M. Siebert at 9:44 PM No comments:

I miss my little neighbors.

A month or two ago a pair of Carolina wrens built a nest cozied in between two plants in a large pot on our front porch. Within no time five little eggs occupied the nest, then five gaping mouths (that was all we could see of the babies in the deep nest). We anticipated watching the babies eventually fledge.

The plants in the pot started looking a bit ragged because I was afraid to water much. I didn't want to flood the nest, especially after the babies hatched. While we sat on our porch at meals, we watched the parents come with caterpillars or other tasty treats, then go again. Often they would perch on top of an iron sculpture at the corner of the porch and belt out a beautiful trill before flying off to go hunting.

Then one morning, a week ago, my husband went onto the front porch and saw the nest overturned and empty. The parents returned, screeching in anguish. It was heart-wrenching.

I know that feeling. A few years ago a cardinal pair built a nest in the bay tree on our front porch. I loved pulling back the shade a crack to look at the eggs, then the nestlings. But one day I looked out and the babies were gone. It must have just happened, because the parents returned and went into hysterics. It tore my heart out.

A year or two before that, cardinals nested in the bay tree. Only to lose the nestlings.

Life is hard for bird parents. It makes me wonder just how many bird babies actually make it out of the nest alive. After watching cardinal parents lose babies from their nests in the bay tree, I saw a cardinal nest tucked away at the top of the black raspberry brambles. It was difficult to see, even when I knew where to look. Surely these babies will fledge.

But, no. They too perished too soon.

Being so small and tasty and easy to capture, baby song birds are on many critters' dinner lists -- snakes, cats, raccoons, other birds. Even squirrels will eat birds from time to time, I recently learned.

Squirrels? No wonder one of the wren parents chittered with such concern when a squirrel was lurking about on our porch. I couldn't figure out why the wren was so concerned about a squirrel. It was as much of a mystery to as is what the silly squirrels like to do on our porch. Sometimes they seem to be licking the concrete. What?

Anyway, we figure the squirrel go the baby wrens, and a squirrel was possibly the culprit in taking out the cardinal babies.

How do song birds cope with losing their young so frequently? I guess they just build another nest and lay more eggs.

We've decided that if other birds start nest building on our front porch that we're going to prevent them by removing any nesting material they lay down. Maybe the birds have learned to cope with their frequent losses, but I don't think I can.
Posted by Sandra M. Siebert at 4:21 PM No comments: