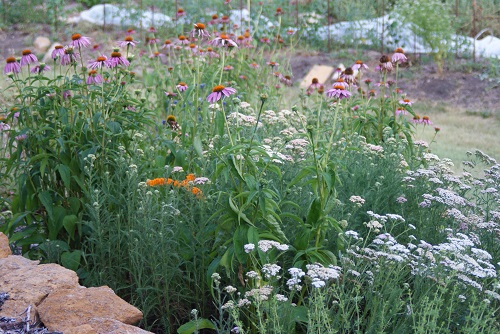 Last night I watched fireflies flashing in the velvet dusk against the deep shadows of the woods.
I stood outside my backdoor and watched the show for 10 minutes or more, drinking in the beauty and magic of those moments. The air was balmy, warm but not uncomfortably so; the perfect temperature according to my standards. Comfortable to be naked, but not uncomfortable with a few bits of clothing.

I recalled many summer nights running around the yard with my siblings, catching fireflies -- or lightning bugs, as we prefered to call them. We'd collect them in jars with holes punched in the lids. My goal was to capture enough of the flashing bugs to make a lantern bright enough to read by.
I never achieved that goal, but as I thought back on those nights decades ago I had an urge to grab a jar and start collecting lightning bugs.

But I'd already showered and dispensed with any chiggers and ticks I'd picked up during my day of pouring out sweat as I harvested and watered berries and vegetables. So I remained safely on the back porch, basking in the evening as it slid through dusk and into full nightfall.
At that moment it was difficult to believe that the temperature forecast for the next day (today) was 100 degrees. 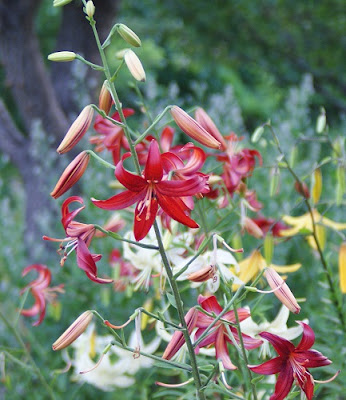 These past two weeks have been unusually hot for June. We typically don't register 100 degrees until July. Not only has it been hot, but rainfall has been incredibly sparse, a situation that is difficult to take on the heels of a period of frequent and high rainfall.

So for the past two weeks I've focused on keeping the vegetable garden watered. This year I laid soaker hoses -- as many as I had -- on some of the beds, including the long bed of blueberries, and the strawberries. That made the task easier and less time-consuming. Yet I still have to move the hose from one soaker to another, and still have to fill buckets for some things.

The heat has felt like a burden. I wake in the morning wishing I could stay in bed and sleep. But when I'm outside in the heat, soaking my shirt and jeans with sweat, my head protected by a broad-brimmed hat, it doesn't feel so bad. I feel myself sweating, but do not feel oppressed by the heat.
Until the middle of the afternoon after I've been standing too long in the sun (especially if I forget the hat) and feel the thirst building. Then I feel the heat pounding. Barefoot gardening is abandoned, as even the chipped wood mulch gets too hot for bare skin.

Not today, though. Today I picked a few things and finished the watering by 11:30 a.m. I spent the afternoon putting away produce, cleaning up the kitchen, and I even took a nap. Tomorrow the heat will have diminished some (only 91) and they say we have fair chance of rain (40 percent) tomorrow night and a bit of a chance almost every day for the next seven days with the temperatures easing back into the 80s.

Ah, to feel the rain on my face again. As with all things, this heat will pass. I've just got to hang in there.
Posted by Sandra M. Siebert at 9:00 PM No comments: