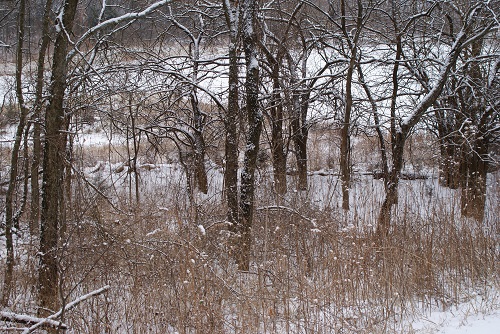 Above was my world about a week ago. Today, the sun shone and all of the white stuff has been gone for days. I worked outdoors with just a light, long sleeved shirt and jeans.

I expected not to find much, especially since we experienced one morning at -4 degrees Fahrenheit. Brr. Not only had we experienced some real cold, but the plants had been hidden from sunlight for about two weeks.

What I found was some unhappy, but still living plants. The small cabbages were more damaged by humidity and a previous bout with aphids than the cold. One young radicchio had begun to rot, but all the rest looked like they would grow out of any damage. Some seemed unfazed. The small lettuces looked good enough, but I doubt they will go anywhere, so they won't be saved. Even the celery looked alive.

And the broccoli was mostly still alive, the dozen or so plants I let stand after clearing things a few weeks ago. I pulled some of them that look too wilted and left the rest, even though the forecast calls for temps in the teens -- and more snow -- next week. We'll see whether they produce again. It's an experiment. The purple sprouting broccoli, a one plant test, was still alive, even though it did not have the benefit of the extra blanket. Minus 4 with just a thin plastic cover, brrr! It's larger leaves were burned, but the smaller ones seemed fresh enough. I let it stand. It's weathered some pretty deep chill, it deserves a chance.

Some other broccoli plants look a bit better. They are seedlings I started just a week ago, sitting under lights in my "sun room." Thirty-two 2-inch pots each boasting multiple seedlings. I never put just one seed per pot. At some point I will thin them down to one, perhaps two, seedlings per pot. I'm counting on at least 32 healthy broccoli seedlings to plant out in March. My second job today was to continue clearing the beds where the broccoli and cabbages will get planted in less than two months.

Thirty-two is 50 percent more broccoli plants than I put in last spring. I'm counting on lots of broccoli, because we're eating even more of it now. I've always liked broccoli, and it has always been a staple in my freezer. But it has now shoved kale and collards off our plates, becoming the main green vegetable we eat. Oh, don't worry, we're still eating kale, but broccoli is queen of green.

Broccoli contains tons of nutrition and supports all phases of the body's detoxification process. Kale, cabbage and all those other brassicas also are full of nutrition, as well as making for healthy hearts, offering us antioxidants and serving as anti-inflammatories, as well as supporting our body's detoxing. But only broccoli supports all phases of detoxification. That's why we are eating more of it. Our bodies are besieged every day by numerous toxic substances, some we take on purpose and are considered "beneficial" (like medicinal drugs). They do provide a benefit, but our body breaks them down into toxic substances, then breaks them down again to clear them out. The same thing occurs with things like hormones that our bodies produce.

While its health benefits are the reason we're eating more broccoli, we were eating it in the first place because it tastes so good. Steamed until just tender and dressed with oil or butter and some ground flax -- quite the treat, if you ask me. Please don't blaspheme this tasty treat with cheese sauce!

What we eat of the broccoli are large clusters of immature flower buds and the thick stems that support them. If you fail to cut your broccoli before it sends up stalks of yellow flowers, go ahead and eat the flowers. Toss them into the nearest salad.
When any of the brassica family sends up flower stalks, the small clusters of flower buds look much like tiny, loose broccoli heads and are edible, too.
Once the main "head" is cut, the broccoli plant starts producing smaller side shoots. Spring-planted broccoli will continue to produce side shoots well into the summer. However, the heads that form in warm weather are not nearly as tasty and sweet as those that form in much cooler weather. (It also opens yellow flowers more quickly when it's warm.) So I plant broccoli in fall, too, even though I don't get as much production.

So, broccoli, I love it. It grows fairly easily -- the seeds I started last week put up tiny leaves in three days. It does like fairly fertile soil and regular watering, as do all its relations. Many varieties of broccoli exist, most of them hybrids, although you can find a few open pollinated varieties, if that is important to you. I think that the two varieties I planted this spring are open pollinated -- Di Cicco (fer sure) and Nutribud (maybe). I planted those because I purchased large packets of them a while ago and I want to use up the seed. The seed is seven years old and still showed a high germination rate. If you're stocking seed for the zombie apocalypse, stock up on brassicas. Long live their seeds!

Broccoli and its siblings have two main pests, the imported cabbage white butterfly and the cabbage looper (a moth, I believe). Both fluttery winged things lay eggs that hatch into voracious green caterpillars that consume your broccoli plants. I protect mine with floating row cover. If you don't want to put the frothy white stuff in your garden, get some Bt (an organic, naturally occurring toxin that mainly affects moth and butterfly larvae) and spray the broccoli well once a week. For me, the row cover is easier.

Broccoli. Eat it. Grow it. Love it.
Give your love some for Valentine's Day. Rosebuds aren't nearly as nutritious.
Posted by Sandra M. Siebert at 8:56 PM No comments: