On Saturday I harvested the last of the brussels sprouts -- we actually got a few "sprouts" (aka "knobs") this time around. Some of them were nice and large and firm, although most were large and loose or tight and tiny. But I'm making progress.

Even when the knobs refuse to form, planting brussels sprouts is worthwhile, as the leaves are a fine and tasty green with more substance than kale. Once we had several freezing nights and cool days, the leaves took on an incredible sweetness. I must say that they are my favorite green. The knobs are just a bonus. Next year I will try amending the soil with just a bit of boron (a sprinkling of borax, which you can find in the store among all the laundry and household cleaners, right next to the washing soda). This fall someone speaking on organic gardening said that brussels sprouts were the only vegetable that responded to boron amendment. So maybe that's my missing ingredient. We'll see.

I started the brussels sprouts indoors in early June, setting the transplants out in the garden about mid-July. Besides adding a little boron, I'll also try setting the plants farther apart. Thirty-six inches was the recommended distance on a Web site I saw today. About mid-October I "topped" the plants, cutting off the growing tip (and eating the small, tender leaves that topped the plant) to spur knob formation. That is supposed to be done about 30 days before you expect to harvest the sprouts. It took mine longer than that, obviously. I started harvesting greens, mainly from the lower portion of the plant, once they looked ready to start "knobbing." When I set out the transplants, I also planted seed of a green variety just for the greens, so I had a few green brussels sprouts leaves, as well as the lovely red Falstaff ones.

Brussels sprouts can stand, unprotected, in the the garden until the temperatures start falling below 21 degrees Fahrenheit. Mine had been protected from marauding insects by row cover (suspended by the PVC pipe hoops visible in the photo) and when the night time temps started falling into the 20s I added a second layer of row cover, probably not necessary, but I was surprised by a couple of nights when it fell to 19.

Other vegetables grew under plastic, once the daytime temperatures stopped routinely exceeding 60 degrees, which was sometime in mid- or late November. We even had 50s and 60s for a good part of December. But that's changing. At this moment large snowflakes are falling and the temperature hasn't yet hit 30 degrees, although it is mid-afternoon. In two days, the low is supposed to hit 10 degrees F (approximately -12 degrees Celsius).

So I spent Saturday preparing for real winter (finally). Along with harvesting the brussels sprouts, I pulled back the plastic on all of the other winter beds to see if anything else was ready to pick. Before replacing the plastic I pulled blankets over everything, hoping that would keep things snug and alive. One small cabbage was ready, and one little radicchio, as well as some small lettuce, purple mustard and arugula. The big surprise was the broccoli, which I had not looked at for at least a week.

When I last opened the broccoli tunnel, I stripped all of the leaves off of several plants (although not as tasty as brussels sprouts greens, they're good for putting in soups and curries, etc.), as well as cutting any small florets. The main bunches of florets had been picked weeks earlier. Imagine my surprise on Saturday when I discovered that more florets had formed, even on a couple of the plants that had been completely stripped. The leaves looked ragged and perhaps had evidence of some disease, but they had formed florets, in spite of some chilly nights and short days. So I pulled the blankets over them and if they survive this coming week, I'll see whether they continue making florets.

Under another plastic tunnel stands one lone plant of purple sprouting broccoli, which was bred to stand through winter and offer an early spring harvest. We'll see how that does. The garden is always just one big experiment.

For now I'll just watch the snow blow and look forward to roasting my homegrown brussels sprouts, or steaming up some of their greens, or the little broccoli florets. When it thaws again I'll check under the layers and see how the veggies are doing in their snug little beds.
Posted by Sandra M. Siebert at 2:38 PM No comments:

Showing Off, just a little

A while back I mentioned that I had taken advantage of some sunny weather to dry pears that were quickly ripening in the refrigerator (see "Pears to Perfection," 10/26-15) and a friend of mine asked if I had any photos of the finished product.

I didn't then, but I do now. Actually, I've had the photos for a while and just haven't gotten around to posting them as I had promised. I've also decided to post a few photos of some other preserved goodies. Just for kicks.

The pears, peppers, tomatoes, and even most of the herbs were dried in the solar powered dehydrator that my husband built two or three years ago. I've loved this dehydrator, although I would change a couple of things, if I could. I would prefer one in which the drying trays were level, instead of slanted, as some things tend to slide. And I'd have more trays on which to dry things. A multi-level dehydrator would be awesome.

But this is the one I've got. (See my "Solar Powered Food" post for photos and more) And I love using it.

One thing I learned this year is that really hot, sunny days can create a bit too much heat for drying herbs. They dried better later in the year when the days were shorter and the temperatures a bit cooler.

Tomatoes are always tricky because they are so juicy. They need at least three hot, super sunny days to dry without any one of them molding. So I always check the weather forecast before putting the tomatoes out to dry. However, several times the day would start cloudy and stay that way, in spite of a sunny forecast. Next year, I will wait until I actually see clear skies before getting the tomatoes ready to dry. Less juicy things can tolerate less than perfect drying conditions.

As you all know (if you've been reading this blog) I've become a fermenting fool this fall. Green tomatoes, green beans, long beans -- nothing is safe from the fermenting brine. I've also mastered the art of fermenting kimchi -- at least one of the hundreds of kinds of kimchi -- using Chinese cabbage and daikon, as well as any other available veggie.

Chinese cabbage still stands in the garden and has even produced flower stalks. So it is time to take it out. I plan to make an Oriental style soup and maybe some more kimchi. It's become our favorite of the ferments... except for the pickled green tomatoes, that is.

We'll never look at a green tomato with a sigh of disdain again. All we'll be thinking is "pickled green delights." Even the little Sun Gold tomatoes got turned into green pickles. I put them into the brine whole, including some half ripe ones for a little yellow color.

Don't they look pretty in the pickle jar?

Perhaps you are tired of reading about my fermenting fun. I am sure the newness will wear off eventually and I'll move on to writing about something else. But not yet. Right now I've got daikons fermenting. Shredded daikon went into the 2-gallon crock for a kimchi-like ferment, using a paste of ginger, garlic, hot peppers and apple (horseradish went into the daikon kimchi) mixed with the daikon and some salt. I wanted to do the kimchi style because it is less salty than vegetables fermented in brine.

However, I also made some daikon pickles, cutting the giant white radishes into sticks, adding seasonings and covering with brine. You'll read about it later, I'm sure.

For now, just enjoy these photos of my preserved produce. I don't like to show off, really, I don't. But my friend did ask for a picture of my pears.

Be careful what you wish for.

Posted by Sandra M. Siebert at 9:28 PM No comments: 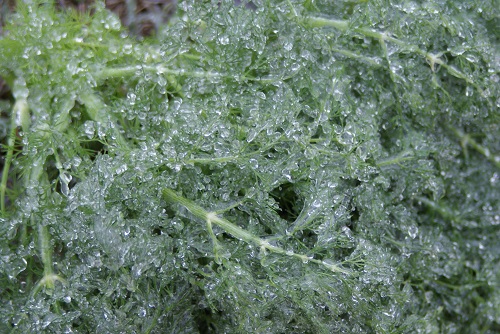 Thanksgiving day began a series of damp, dreary and cold days, with rain and freezing rain, a little sleet and perhaps a bit of snow mixed in. (I know, I know. It's been almost two weeks since Thanksgiving, but hey, Life...)

Fortunately we escaped the worst of the freezing rain. Because the weather had been in the 50s most days prior to the rain, no ice stuck to the roads. It did, however, form a crust on the chipped wood garden paths (if you look closely, you can see deep prints of deer hooves). 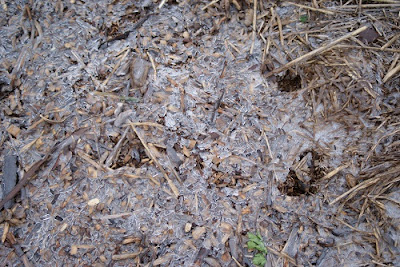 The wooden railing by the stairs outside our back door also developed an icy coat, making it more treacherous to hang onto the railing rather than to trust your footing on the stone steps, which had less ice on them,

Multiple drops of rain froze onto the still green dill plants (above), creating multiple jewel-like beads on the fine leaves.

Trees collected a little ice, but not enough to bring down branches, unlike to the west of me, where fallen tree limbs and power outages were common.

A couple of days before the rain, I took the row cover off all of the beds where broccoli, lettuce and other fall/winter veggies still grow, planning to put plastic, suspended by PVC pipe "hoops," over them as protection from further winter weather. Since it had been a pretty dry fall, a waited so that the rain would dampen the soil and the plants could head into winter with a good drink. Puddles formed in the large leaves of broccoli plants, which became puddles of ice highlighting the veins of the deep green leaves. 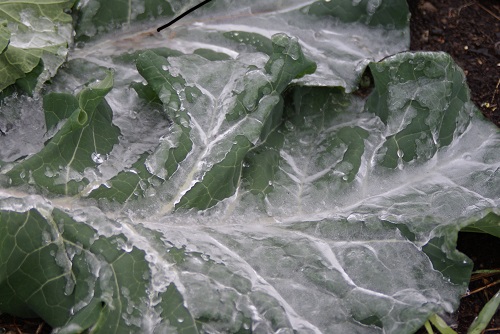 From Thursday through Monday the weather was damp and chill.

Today we enjoy balmy weather in the 60s (Fahrenheit). The plastic low tunnels have been vented, to alleviate the excess heat that builds up on sunny, warm days. From icy to balmy. You never know just what to expect here. At least our wood supply is decreasing slowly. It will be more than enough for the winter. I just hope winter doesn't decide to stay late.

Just one more... Ice beading and pooling on the Chinese cabbage, which has made delicious kimchi. 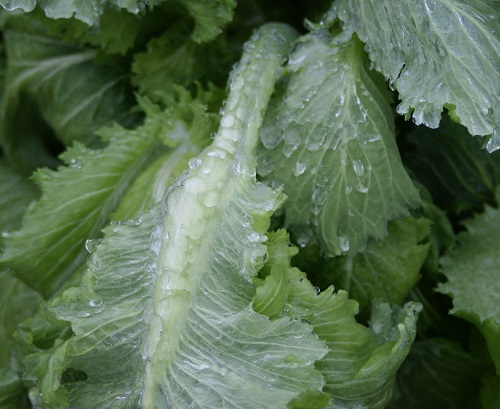 Posted by Sandra M. Siebert at 2:59 PM No comments: