Falling into Autumn, and Stuff...

September... and bird migrations are underway or just about to begin. We're in the middle of the hummingbird migration at this point. According to another blogger the adult ruby throated hummingbirds have left town and the "teenagers" are still hanging around.

One such teenager hangs around our place, taking sustenance from the masses of Lady in Red Salvia that spring up in our flower beds. I love these brilliant cousins to the garden sage. I received a packet of seeds from a friend several years ago, and since then I have not had to scatter any more seed. Lady in Red self sows prolifically and creates a spectacular late season show that inspires my heart and gives the hummingbirds food to fight over.

When we take our meals on the porch we frequently see the current hummer resident sitting atop a tomato cage a dozen or so feet from one cluster of Lady in Red. It occasionally swoops in to get a snack, then heads back to its perch to guard the flowers from any other "teens" that might want a sip. If another hummingbird dares to try to steal a sip we hear a mighty buzz (from the millions of wingbeats) and perhaps some chirps as the argument ensues.

Even in the rain the little bird sits on its perch or flies and hovers momentarily around the flowers in search of nectar. The particular tomato cage it sits on is empty. I could have taken it to winter storage with the other tomato cages, except for the hummingbird. I've pretty much given up on the tomatoes, except for the Sun Golds, a couple of paste tomatoes and one Henderson's Pink. And some of those 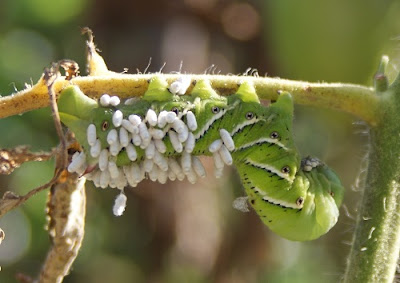 may come down in  a couple of weeks, long before frost threatens. It hasn't been a great year for tomatoes, although I do have a number of jars of roasted Black Plum tomatoes in the freezer, and three containers of dried paste tomatoes and two containers of dried Sun Golds in the pantry.

Aside from the weather slowing things down and aggravating the usual disease conditions, tomato hornworms ate up a lot of the foliage, leaving naked stems. The first hornworm I found got tossed into the woods, the next two I left in place because they looked like this....(look left)

Those little white things are cocoons (yes they do look like eggs, but they're not) of one species of braconid wasps that has an affinity for tomato and tobacco hornworms. These parasitoid wasps lay their eggs inside the caterpillars. When the larvae hatch, they feed on the internal organs of the caterpillar then emerge through the caterpillar's skin and spin their tiny cocoons. Four or so days later, they emerge as adult wasps. Not fun for the caterpillar. I left this guy in place because I knew it wouldn't eat much more before melting away. The tomato hornworm is the larval form of one type of hawk moth --or is it a sphinx moth while the tobacco hornworm turns into the hawk moth -- something like that.

In spite of the squash bugs, however, I still have some relatively healthy summer squash plants producing in the garden. One is Lemon Squash, which produces fruit the shape, size and color of -- you guessed it -- lemons. A neighbor gave me the seed saying that it seems to stand up to the squash bugs well, and indeed it has. One of the other plants is a yellow crookneck squash, which I had noticed in a previous year did not keel over from squash bug attack as quickly as other summer squashes. I've been picking the crooknecks very young, fearful that the plant will die before the fruit gets much size. But so far, so good.

The third type is a green scallop squash, which I planted because I happened to have the seed. I think one reason these squashes have held up is that I water them quite regularly. At least every other day a couple of dishpans full of water get dumped on them, as they are in a convenient location. Next year I'll try that tactic again, adding row cover in the early stages to prevent squash vine borer, and delay the attack of cucumber beetles and squash bugs. This year's squash were planted in late June, past the time when vine borers lay their eggs. Maybe I'll get enough squash to put in the freezer next year. Maybe. Possibly. You never know. I try not to get too attached to my squashes.