Hedge balls have fallen fast and thick over the last few weeks. While I'm out in the garden, I occasionally hear a tiny snap, a rattling of leaves and a gentle thud as another hedge ball, aka hedge apple, falls to the ground. These large, wrinkled fruits grow on the hedge tree, officially known as the Osage orange.

The hedge apples are pleasantly fragrant and sometimes used to repel insects. They are hard and somewhat heavy, and it would be unpleasant to be standing in the wrong spot when one falls. Mostly, however, they are a minor nuisance, creating "trash" that I am compelled to clean up. They are inedible except for their well-hidden seeds. But who wants to tear up a hedge apple just for a few small seeds? I will leave them to the squirrels who delight in shredding the fruits.

As the hedge apples fall, I am watching the forecast for potential frosty nights.We've had a few nights when lows  hit the low 40s. (BRR!), but so far, the forecast doesn't get close to freezing for at least the next week. However, our average first frost date is mid-October, so I am planning for Jack Frost's visit.

As soon as the low temperature forecasts begin to fall near frost levels I will drag the old blankets and sheets out of the attic to throw over susceptible plants. Typically, the weather remains fairly mild after the first frosty night and we might not see another frost for a week or two or more. So protecting vulnerable veggies for a night or two can mean they will continue for a while afterward. Smaller, single plants can be protected by large buckets. My task now has been to wander the garden and decide just what will be worth protecting.

Tomatoes? I've already taken out the Black Plum tomatoes, which have always succumbed to whatever disease much sooner than the other varieties. The vines had many beautiful green tomatoes on them, and I could not bear to simply compost them. So I devised a Green Tomato Chicken Curry that was superb. My husband keeps asking if we have more green tomatoes in the garden. I've also seen a recipe for fermented green tomatoes.

So when the forecast calls for tomato-killing temps, I will not only pick all of the red and partly red fruits, I will happily strip the vines of green tomatoes, as well, perhaps even freezing some for later green tomato dishes. The tomatoes are too large to easily cover, so I'll let Jack Frost take the. 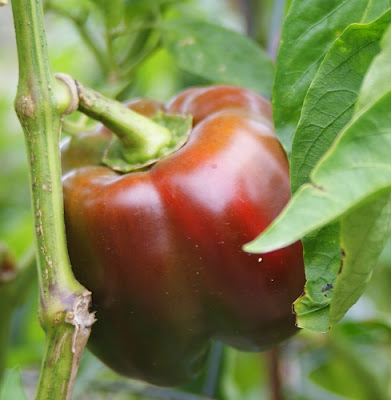 The bell peppers are another story. They've not been as productive as usual, so I haven't frozen nearly enough to get us through the winter. Organic bell peppers that have reach full color (red, orange, yellow) are quite expensive and I've got only a few in the freezer. The are very precious. Fortunately, peppers that have started to color will fully ripen on the kitchen counter if the temps are going to fall so low that covering them is futile. Perhaps I'll also throw a blanket over the scalloped summer squash, depending on whether it still has little squashes on it at the time. They were planted late and have only just started producing and add a nice fresh flavor to stir fries.

And the nasturtiums. At least some of them will get covered. Right now they are large and lush with an abundance of brilliant blooms, to beautiful to sacrifice to Jack Frost. Each day I pick large bunches of nasturtium blossoms to top our salads. They create a beautiful dish and add a spicy-sweet pop. Different colors of blossom often differ slightly in flavor. I frequently pick a bloom and pop it in my mouth while I'm in the garden. If it hasn't been visited by bees, I get a lovely sweetness from the nectar.

Of all the summer vegetables that will go down when Jack Frost first visits, I think that I will miss the nasturtiums most. You don't find them in stores. Lunch will be much less colorful when they are gone. Perhaps I will write more about them later. 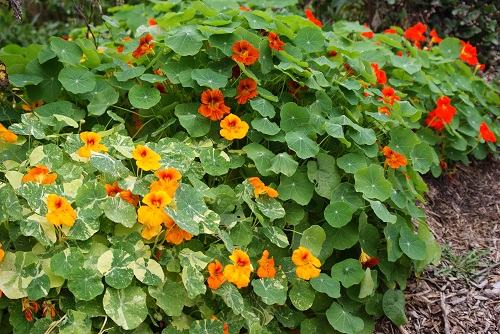