Do not Adjust your Screen... 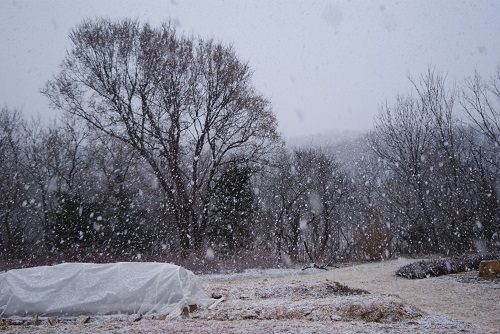 The scene this morning... Snowy.
Giant flakes falling, floating, caressing...
I love surprises such as this (unless this were July, then, not so much loving the snow; but it's still February).
The snow on the ground was gone by noon. The afternoon was lovely -- partly sunny and in the 50s.
I'll be back in the garden tomorrow... What will I find?

P.S. The plastic-covered low tunnel in this pic has kale growing inside. I put blankets over the kale weeks ago, when the temperature was set to drop below zero -- which it did. Last week I removed the blankets and found some of the kale still alive. It was a ghostly pale yellow due to lack of sun, but alive. I left the ends slightly open to vent out heat, since we were getting sunshine and highs in the 70s.
The other night when the forecast predicted a low of 28 I didn't bother to close the ends because kale can take 28 degrees without breaking a sweat. Not so sure how the 15 degrees we actually experience affected it, but it was undercover and the ground is warmish. I haven't looked yet because I've had other priorities, but I'm hoping for early kale. Guess I should also check the spinach, which has no cover, but is surround by a cushy hay mulch. Early spinach, yay.
Posted by Sandra M. Siebert at 8:29 PM