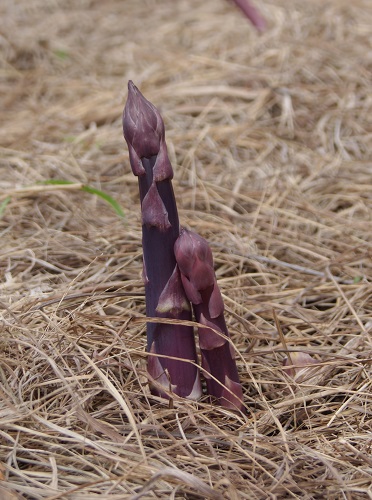 It's asparagus season!
This cozy pair of shoots was consumed long ago, as I started my harvest just before the beginning of April. Lunch today included super tasty roasted asparagus. It's also great steamed and drizzled with olive oil and balsamic vinegar, or lightly cooked into stir-fries and other vegetable dishes.

In times past I've been forced to wait until almost mid-April for my first taste of this perennial vegetable. But our recent milder winters and early spring warm-ups seem to have pushed asparagus season up a couple of weeks. While this might appear to be a good thing to some, I'm not sure it is. Harvest should last only a couple of months regardless of when it starts. And last year the asparagus did not seem as productive as in previous years. It doesn't look like it will be quite as productive this year, either.

Some of the lack came from the disappearance of some of the plants. I'm not sure why they died out -- maybe because I don't water them much during droughty conditions. Anyway, this year I bought a half dozen crowns to fill in some empty spots. The nursery employee who checked out my purchases suggested putting rock salt on it. "They love it," he said. True or not true? Most things I read say that salt is an iffy additive at best, and detrimental over the long term at worst. Asparagus tolerates sodium chloride salt better than other plants, so application of rock salt has been used as weed control, but is not actually beneficial to the asparagus otherwise. Although some sources say that's still a controversy.

I'm not planning to use salt on my asparagus, as I did plant parsley in the asparagus bed, which is supposed to be helpful to the asparagus, although I forget how. Anyway, I'm always looking for ways to use my beds for more than one crop. I also get cilantro popping up in the asparagus. Since my husband eats lots of cilantro, I let it grow wherever it wants to -- almost.

Asparagus is relatively easy to grow. It prefers loose soil with plenty of organic matter, although it will still do well in pretty much any soil type, as long as the pH is about neutral. It's getting too late to plant asparagus here in northeast Kansas, so scope out your garden areas and start preparing your asparagus bed now, digging deeply and adding compost. Planting in a raised bed helps keep it well drained in extra rainy times, and allows the soil to warm a little sooner in spring. Don't harvest your asparagus in the year you plant it, and then harvest only minimally until the fourth year, when you can harvest the full eight weeks. You can extend the harvest a couple more weeks by allow a couple of fronds to form for each plant about midway. That provides energy from photosynthesis.