We are less than two weeks past the Autumn Equinox and the season is in obvious decline. A scattering of leaves litters the ground and summer vegetables have significantly slowed production.

All but two of the tomato plants have been retired. They looked puny and were no longer setting on flowers, so I picked all of the useable tomatoes, green and red, and pulled out the vines. The remaining plants look fairly lush yet and continue to produce, so I will leave them until frost, or they start looking really bad, whichever comes first. Mixed feelings filled me as I pulled the tomatoes. On one hand I love the dried tomatoes and roasted tomatoes I've put away, and part of me wants to keep collecting more. On the other hand, it's one less thing to do. I can focus on other tasks. Ditto with the summer squash.

One of the beds of summer squash has been cleared -- between the squash bugs and powdery mildew the plants were dying. The second bed of squash has been significantly reduced, as I've cut off most of the worst looking leaves and dead vines. But the plants continue to set on tender squash, so I will leave those in place until they die off more. Later today I plan to do another batch of roasted squash with apples. (Instructions in a later post.) This simple way of doing the summer squash will work nicely with winter squash and sweet potatoes. 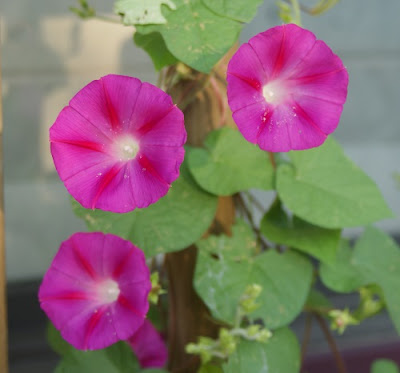 It's apple time here in northeast Kansas, actually well past apple time on our farm. The trees have been cleaned of fruit by the joint efforts of me and the neighborhood squirrels. I picked the apples a little earlier than I would have prefered because the fruit started to disappear. We had a really good crop of apples and I am selfish. I did not want them all to go to the squirrels. The good news is that they were ripe enough that after some time in the fridge, the apples have sweetened up. Numerous batches of spiced baked apples have been put in the freezer for later dates. Many jars of dried apple slices line the pantry shelf. Sometime in the next few days I will pull out the crock pots and cook up some apple butter, which will go very nicely with the grain-free breads we've recently learned to bake. And, of course, more apples will go into my roasted summer squash pan (and future sweet potato roasts). 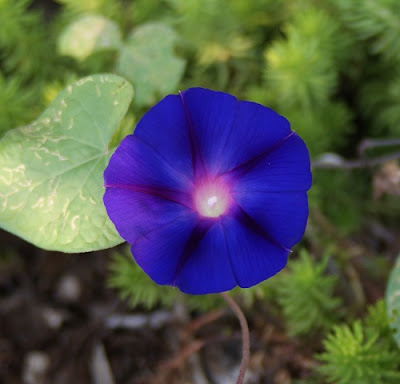 Even in the state of decline, the garden continues to produce abundance. Although their leaves are tattered by the munching of various insects and their larvae, the morning glories continue to be glorious. Their morning displays will continue until frost. The recent cloudy, cool mornings extend the time of bloom, so they don't close up until after noon. The nasturtiums, which struggle during hot weather, are blooming profusely. Spicey blossoms for my meals. Some of the leaves will go into my mixed greens ferment, as soon as I get around to pulling it all together. It was a mighty tasty ferment last year.

And the sweet potatoes... the vines are lush and have grown through the protective fencing and onto the path. I've noticed where the deer or rabbits have nibbled off leaves, and that's fine. Soon I will cut back the vines and dig the orange roots, and some purple roots too. I love sweet potatoes. A few years ago, a dedicated group of market farmers had October declared Sweet Potato Month in Kansas. Events were scheduled and a fun time was had. I have not seen any events planned this year yet, but the Celebrate Sweet Potatoes - Lawrence, Ks., Facebook page remains active. So I have hopes.
Posted by Sandra M. Siebert at 10:08 AM