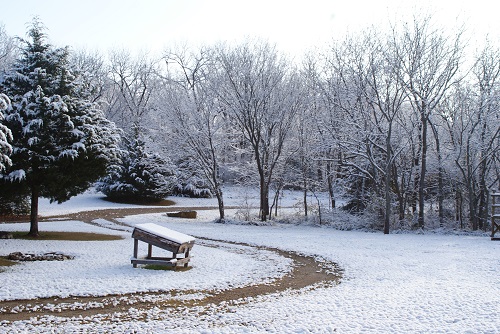 I walked out my bedroom door yesterday morning, ready or not to greet the day.

Snow had started falling the previous afternoon, picking up its pace as the evening darkened. I knew I would find snow on the ground, but did not anticipate the view that greeted me.

The snow was a wet one. It billowed on the ground where low-growing plants had not yet died back, and clung to tree branches, starkly white against the deep green of the red cedars. It piled on the horizontal wires of fences, and weighted down the white row covers on the low tunnels so they sagged like horses who had borne too many riders,

According to my husband, the sun broke through the clouds the very moment I opened the bedroom door, as if the universe had been waiting to gift me with this view. Almost as if it wanted to make up for the fact that the temperature on our hilltop would drop to a mere 10 degrees Fahrenheit that night.

I forgave the universe (the forecast being for "just" 15 degrees that night) and almost immediately grabbed my camera. I headed outside, with my feet still bare (I didn't go far), to snap some shots before the snow disappeared.

As predicted, the wind arrived shortly after that and I watched snow-laden branches of the cedars begin moving like waves on the sea. I was mesmerized and momentarily considered taking a video. But photos and videos never capture the true magic in a moment, only memories can. So I stayed in my chair and watched. Then the wind rose higher and began shaking snow from the branches. Today, hardly a flake of snow is left.

I will wait a few days before checking to see if all the blankets, hay and other coverings saved the cabbages and kale and lettuce from death by freezing. We harvested some stuff during the days before the deep freeze, lettuce, rutabaga greens, bok choy, radishes and kale -- just in case. I opened one little tunnel with the intent of just letting most of it go -- but the turnips were so beautiful that I pulled them all, salvaging a couple dozen or more baby turnips the size of my thumb or larger. I saved a few of the turnip greens, too. I'm not that fond of turnips, either root or green, but I like them well enough to eat a few, for the diversity. And when something is that beautiful I can't just let it go.

So, did three days effort (when I wasn't feeling well mind you) save my cabbages and rutabagas, or was it all in vain? Regardless, it was worth the effort. At least I tried. I made the effort. I've done other things in my life that did not come to fruit, but I'm satisfied in that I made an attempt. And so, after I'd spent time laying blankets and scattering fluffy piles of hay, it did not matter so much what the aftermath will look like. I felt better both mentally and physically having done the work. That is enough. 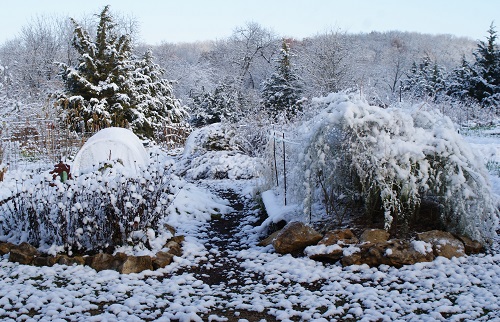