Ups and Downs and Diggers 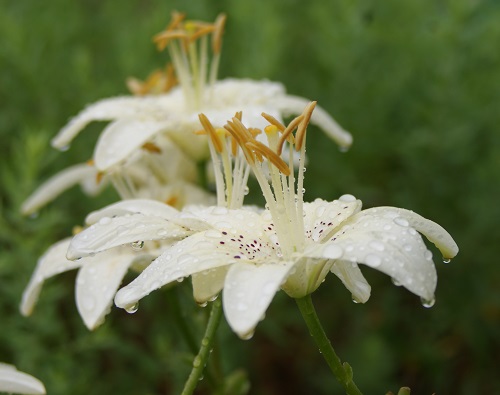 A recap of my summer so far:
May -- Will it ever stop raining and warm up?
June -- Will it ever rain again and cool down?
What is digging up the garden?
With almost constantly cloudy skies throughout May and cooler than usual temperatures the spring cabbage crop was phenomenal. (Why did I think we needed 60 cabbages?) But I was worried about the summer vegetables. I did eventually get the tomatoes, peppers and eggplants in the ground not too much later than usual. They all seem to be doing fine... except for the eggplants. More about them later.
After we received 8.5 inches of rain, about three inches or more than average for the month (with some areas near us receiving much more) it finally quit raining and warmed up.
I mean heated up to warmer than "normal" temperatures for June (as if there is such a thing as normal anymore). Highs in the mid- to upper 90s Fahrenheit, I was concerned about all of the new plantings baking. The weeding and some other projects moved along slowly, or not at all, as I spent a good bit of time everyday watering. The heat just sucked the moisture out of everything, which had not put out extensive root systems because the soil was drenched in May. The water levels in my rain storage tanks were running dangerously low. But then...
As you can see by the water dripping off these lilies it did rain again, on Thursday morning. Then it rained again yesterday (Friday), bringing thunder and lightning. Quite nice. It's showering this morning.
And we found out what was digging in the garden. 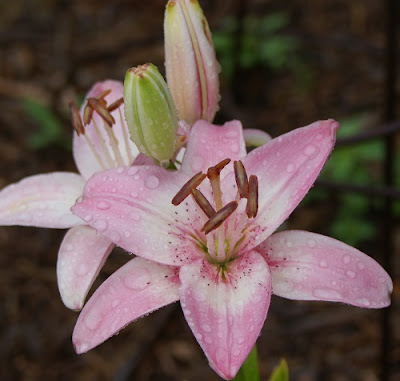 Every morning we'd go into the garden and find the edges where the path meets the raised beds dug out -- hay mulch pulled off the sides of the beds and the chipped wood mulch of the paths disturbed. This didn't occur in just a few places, but all along several beds. Initially I thought mama rabbits were going nuts with nesting behavior. But the digging became more extensive, not destructive yet, just a big mess Every Single Morning. This can't be just one animal, I thought. Then the holes became deeper, going into the soil. Maybe it's not rabbits.
One night my husband couldn't sleep so he went out around midnight and discovered the culprits.
Raccoons. He saw at least four adolescent raccoons.
Out came the live trap and the marshmallows. We would relocate them.
So far we've given three of them new homes, but not before they started digging in some of the growing areas. Fortunately, no serious damage. Not until I fertilized my struggling eggplants with liquid fish.
I know, I know, stupid move. Stooopid move. They didn't dig up all of them, however. I replanted and watered the ones that looked as if they would potentially survive, and a few days later went to a local nursery to get a few more plants. To prevent that from occurring again, I put chicken wire around them. Plus I laid chicken wire in areas where the digging was threatening plants.
And the raccoons?
We trapped a fourth one. My husband saw it in the trap at 3:30 in the morning. But when he went out at 7 a.m. to take it for a ride it was gone.
How?
We don't know.
No vandalism last night when we had storms.
Was it the storm, or did the vandals decide to go somewhere safer?
Only time will tell.
The forecast contains chances of rain every day well into next week, with cooler but more "normal" temperatures. Are we heading into another period of me wondering if it will ever stop raining again?
Whatever. Our rainwater storage is full again, and I'm ready (more or less) for when it stops raining again. I'll spray insecticidal soap on the eggplants to curb the flea beetle population, and I hope the eggplants will grow better.
Up and down go the temperatures and the rain chances. In and out of the garden go the diggers (I hope out for good now). I'm waiting for blackberries to ripen and watching the tomatoes swell and possibly we'll have cherry tomatoes very soon.
Ah, Summer.
Posted by Sandra M. Siebert at 9:25 AM