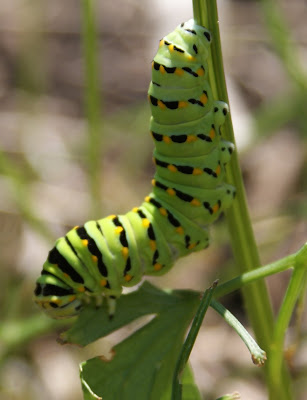 Late last week I found this little guy and some of his/her pals munching on my parsley.
That is only to be expected, as one of their common names is "parsley worm."
But they are not worms. They are the larvae of the Black Swallowtail butterfly.
One clump of parsley, which has already suffered the insults of extreme heat and drought, was completely defoliated and they are starting on the next. The bunch of parsley I picked for bean salad contained a teeny tiny new hatchling parsley worm.

I love swallowtail butterflies and am loathe to kill their larvae. At a previous home, I had a lovely stand of bronze fennel and would have just moved the little larvae there, as they love all the parsley relatives -- fennel, dill, carrots -- and I had plenty of fennel to spare. Now however, I have only one tiny little bronze fennel and the dill has long since dried up. If I want parsley, I will just have to cut it all down and use or freeze it.
I hope that in coming years, a stand of bronze fennel will grow so I can give the larvae a new home when they show up in the parsley.
Posted by Sandra M. Siebert at 10:01 AM