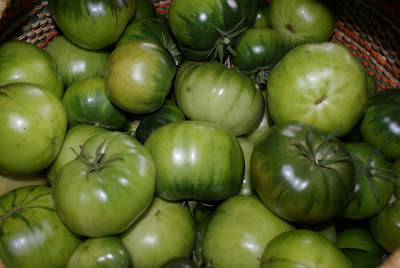 What do YOU do with 48 pounds of green tomatoes?

What I did was give most of them away.
I made all my green tomato pickles a couple of months ago. Yet, I have visions of a green tomato pie and other potential goodies, but not 48 pounds worth.

So why do I have 48 pounds of green tomatoes?

Well, Tuesday night was supposed to bring our first frost of the season. So I picked several tomato plants clean and took out some of them. Too many other things needed my attention, so I covered most of the Black Krim tomatoes, hoping they would survive the three nights of freezing temps. Tuesday night did not bring frost to our hilltop, but last night did. And tonight the forecasters say will be freezing again. After that, we're in the clear for a while.

I hope the bell peppers and Sun Gold tomatoes also are cozy enough under their blankets to survive last night and tonight.

I had hoped for a late first frost, as the tomatoes and peppers had rebounded from our brutal summer heat and were in the first stages of a production frenzy. The green beans -- pole beans by the name of Lazy Housewife and Ideal Market -- had come back with a fury. In the past week I picked as many pounds of green beans as I did before the summer heat put an end to their flowering.

I did not cover the beans, but simply picked every one that was of decent size.

The final picking on Tuesday gave me 2 1/2 pounds of beans. On Monday I had picked 3 1/2 pounds. Not bad for the end of the season.

As sorry as I am to see the bean harvest come to an end, I am most sorry to see the flowers frozen. Yesterday I picked a large basketful of flowers and placed multiple bouquets, large and small, around the house.

The marigolds, I knew, would not survive freezing temperatures. So I have a couple of vases full of them. One vase is appropriately placed next to photos of our late grandparents. In Mexico, from what I understand, marigolds are strewn about on the Day of the Dead (aka in other cultures as Halloween, Samhain, All Souls (Saints) Day) to guide the souls of ancestors.

In the past week the cosmos have exploded with bloom. They have been blooming for quite some time, in spite of receiving no supplemental water throughout our dry summer. Being native to Mexico, they are very drought tolerant. They must have known that the end was near, for the plants were a mass of pink and white this past week. 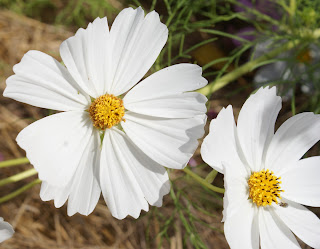 Last weekend I picked a bouquet of cosmos to put in the guest bedroom, as a couple of friends were planning to spend a night here. As I picked them, I noted that it was appropriate that the bouquet would be of flowers named "cosmos," as one of the guests is an astrophysicist, who studies the cosmos in a larger sense.

"Cosmos" is a Greek word for harmony and an orderly universe. The flowers were given the genus name  of Cosmos because their evenly spaced petals reminded those assigning scientific names, of harmony and order.

Other flowers that went into bouquets were snapdragons, a bi-colored variety and a red one. Pull a blossom from the snapdragon and squeeze it at the back. Its "mouth" opens, then snaps shut as you release it. Lots of fun for the kids (even for 54-year-old kids). I showed this to my 3-year-old granddaughter a few weeks ago and she enjoyed making it open its mouth for several minutes.

I also picked a few zinnias and some killer celosias. Sage, yes ordinary garden sage, is a great companion for celosias in a vase. Celosias dry down well for wreaths or dried flower arrangements, although their color fades a bit. Dry them on a sheet of newspaper or in a paper bag, as their hordes of tiny black seeds fall out as they dry. Save them to plant next year, although I cannot guarantee that the new plants will look just like their parents.

Later today I will see what survived last night's freeze. Through the window, I can see that the celosias, already stressed by drought, probably did not survive. I will cut remaining flowers to dry and then take out the plants. My main tasks for this afternoon and the next few days will be to take out freeze killed plants and to water the blueberries and autumn/winter greens. I won't remove the coverings from the tomatoes and peppers until after tonight's freeze.

Then I will wait for the next overnight freeze. At that time, I will let the tomatoes go. And maybe the peppers. We'll see...
Posted by Sandra M. Siebert at 10:29 AM

That's an impressive haul of green tomatoes! I love the red snapdragons and I don't think I have ever seen or heard of celosia - I must go an look it up. Good luck with the frosts.

Pear Tree Log,
Celosias are quite varied in their size, color and bloom shapes. They are related to amaranths and some are used as food.

Doesn't it break your heart to see summer's bounty come to an end! We just hauled in our green tomatoes, peppers, and herbs! You could make a green tomato relish, I'll bet it would be delicious!

This is my 1st visit to your blog and I'm now following! Have a lovely weekend!