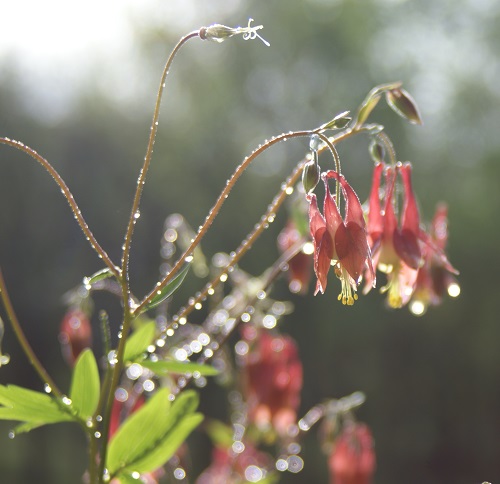 On Saturday the morning sun glittered off the columbines beaded with rain. This morning, the sun, as it barely peeked over the trees, spotlighted the crowd of red and yellow, drooping flowers. A few weeks ago, when the first of these "wild" columbines bloomed, I felt my heart sing as I looked at it.

The flock of columbines fills the view from my front window these days, brightening what would otherwise be varied shades of green, until the yellow iris, and Asiatic lilies bloom.
It won't be long before I begin ruthlessly cutting down the pretty columbines. Yes, they are beautiful and give me great joy, but they spread their seed with abandon and I think we have enough of them growing in the flowers beds -- Don't you?

I will, however, collect seed again; to share or to scatter in places where I want their beauty to shine.They do seem to do well in places that other flowers will not grow.

These red and yellow flowers definitely earn their tag of "wild," springing up here and there, regardless of how carefully I try not to spread the seed. But they are such joyful flowers that I cannot begrudge them their place.

Columbine flowers even add a bit of color as garnishes on our meals. They are red, so we figure they must possess some of the antioxidants tied to red pigments in many foods. "Eat the rainbow" for better health, they say. So we're eating the rainbow.

We're also taking in other types of "wild" nutrition now sprouting all over the place.

Nettles are the premier "wild" food on our plates at this time. I enclose the word "wild" in quotes because I actually cultivate them. Rather, I don't cultivate so much as just let them grow. I did transplant them to the three different areas they now inhabit. Other than that, they simply spread and grow without care, while I try to keep them from growing in the paths and non-nettle areas.

Nettles possess a great deal of nutrition. And yes, I do mean "stinging" nettles. Once cooked or dried, the nettles lose their sting an only provide great nutrition to your body. They are rich in nourishment, such as bone-building minerals, and frequent are used to return vitality to an ailing body.
They have a really rich flavor, which I find a bit overpowering on its own. So I mix my nettles with other foods.

We pour a bit of broth in the bottom of the skillet and stew the nettles well. We then either mix them with whatever vegetable-dense meal we've prepared, or top them with an herb-infused vinegar and oil dressing (which also serves to help your body better absorb the nutrients). Ground flax or nutritional yeast round out the flavor quite well.

Recipes for nettle soup often have you first cooking the nettles in something such as bacon fat, then blending with cream. That is not so much to my taste.
Nettles also can be brewed (either fresh or dried) into a nutritious tea. Some like the flavor of straight nettle tea. I prefer blending mine with other strongly flavored herbs, such as mint. Now that the solar powered food dehydrator has been put back together and set in place, I plan to start drying nettles for tea, or adding to food during the large portion of the year I cannot harvest nettles. And time is running out. One must get your nettles before they begin to flower, when little kidney-irritating crystals form in them.

When eating fresh, cut just the top four or six inches of the growing tip off the nettles. The stems and leaves below that point are tough and fibrous, which I don't think is a problem when brewing tea, or crumbling dried leaves into foods. Nettles also can be added to a bone broth brew for extra nutrition.

Other wild foods now on the menu are lambs quarters and dandelion greens. Yes the dandelions are blooming, which makes their already bitter leaves more bitter. But we add them in small amounts to our other wild greens, giving our meals a hint of bitterness and some of dandelion's goodness. I plan to look into a few other weedy foods, some of which were introduced to this continent and have gone wild, others which are native.