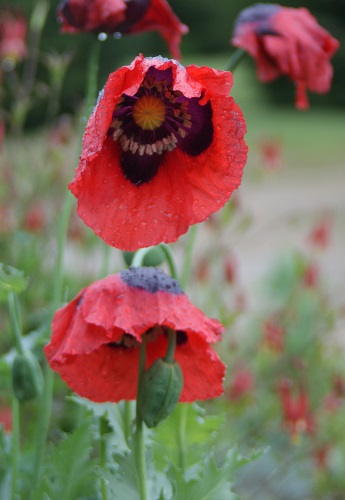 The columbines are shedding their flowers, readying to form mature seeds and scatter them everywhere. And the poppies have begun blooming.

This morning their heads were bent from the weight of rain; but as soon as the rain stopped and a breeze sprang up, their petals became light and they lifted their heads.

I do love poppies and only wish they were suitable as cut flowers. However, they wilt as soon as you cut them, And their season of bloom does not last nearly long enough. This year my garden contains poppies from seed that dropped last summer (the ones now beginning their bloom), as well as much smaller poppy plants from seed I scattered in March. That should spread out the bloom time a bit... I hope.
It's also the season of strawberries. I do so love strawberries. And they are good for me, too. The strawberry is ranked among the top most nutritious and beneficial fruits, containing many vitamins and other nutrients, as are most deeply colored berries. The berries are full of antioxidants, anthocyanins, polyphenols, quercitin and other substances that serve as anti-inflammatory agents that help prevent heart disease, cancer and stroke. 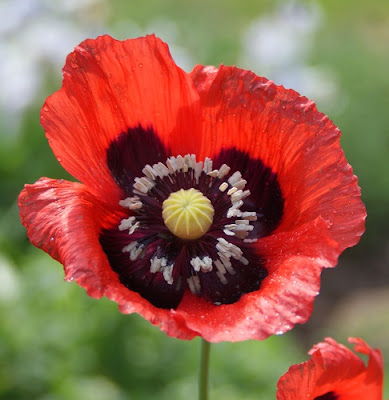 Long considered an herb of the heart it symbolizes love, as in "I Love strawberries. And 9-year-olds across the country agree. Some study done somewhere concluded that more than 53 percent of 9-year-olds said the strawberry was their favorite fruit. Only 53 percent? Strawberry must have been second in line for the rest of them. The berry also benefits the physical heart, improving circulatory system function.

Although a sweet, sweet fruit, it can be used to control blood sugar. An acquaintance of mine once told me that she had done a test with several fruits, eating them, then testing her blood sugar. The strawberry was about the only one that did not cause a blood sugar spike. Use them with cinnamon for a double-whammy blood sugar control. They may be helpful in controlling allergies, but also are a common allergen, so beware.

Strawberries also assist with constipation and contain vasodilators that can reduce blood pressure -- the list goes on, especially when you add in the leaves. Strawberry leaf tea is astringent (useful in diarrhea), a diuretic (helps you eliminate excess water), and an infusion can be used as a gargle for sore throat and a wash for minor scrapes and burns. One source noted that the leaf can be used as a substitute for black tea.

The wild wood strawberry is the one most cited as medicinal, but all strawberry species and varieties possess similar properties, although the cultivated ones might not be as strong.

Various species of strawberries grow all over Europe, and are native to North and South America. Our cultivated variety is a hybrid between the common North American Fragaria virginiana and a species from Chile, Fragaria chiloensis. The species name for our cultivated strawberry, of which there are more than 600 varieties, is Fragaria x ananassa. 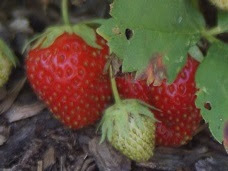 The strawberry is the subject of many bits of folklore and legend, including a Native American one that tells of a quarrel between a man and woman. The woman left and the man regretted his actions that caused her departure. So he appealed to a sky spirit who placed various wonderful berries in her path. She stopped only upon arriving at a field of strawberries. Eventually, she returned to the man.

If you don't have your own strawberry patch, buy organic strawberries whenever possible, as hundreds of chemicals -- from pesticides to fungicides are used on them. Changing cultivation practices, however, made it possible to grow commercial acreages of organic berries.

Pests and disease are a given in a strawberry patch, but I have never found them troublesome enough to warrant use of even organic-approved pesticides. The snails, slugs and strawberry seed bugs leave enough for me to feast on and store in the freezer. The June-bearing varieties do require "renovation" and feeding in late summer, once production has ceased (which I hope to cover at the appropriate season), but have otherwise been trouble-free for me -- after I put up barriers to keep deer and rabbits from eating the plants. Don't fertilize strawberries in the spring, as that can make the berries soft and spoil more quickly.

Strawberries come in June-bearing varieties (which produce here typically from mid or late May through June), and these come in early-, mid-, and late-season varieties. If you plant some of all three, you can extend your harvest beyond the usual three weeks. Ever-bearing and "day-neutral" varieties produce pretty much all summer, with a bit of a slow-down at some point. However, they do not produce as much overall as the June bearers. I grow an early variety, Early Glow, and one that produces a bit later, Sure Crop. Of the two, Early Glow is my favorite, as Sure Crop berries can be a little on the soft side.

What more can I say about these luscious fruits? Well they aren't "true" berries, but are "accessory fruits." The fleshy part does not form from the ovary walls (as in true fruits), but forms from a bit just behind the bloom. The little seeds, called achenes, that dot the surface of the fruit are the "true" fruits, little dry fruits that form from ovary walls. The seeds are so numerous because each flower contains many little pistils (female flower parts) in the center. The lowly, ground-hugging strawberry is a member of the Rose family, as is the tall and spreading apple, and many of the cane fruits (like raspberries and blackberries, which I hope to address and harvest soon).

Plant strawberries, for "God could have made a better berry, but he didn't." (An old saying.)

One more thing...
While researching strawberries, I came across a recipe for Strawberry Salad, which included strawberries (of course), cucumbers and black pepper. If I manage to have fresh strawberries and cucumbers at the same time, I may try it. Sounds interesting.
Posted by Sandra M. Siebert at 11:50 AM