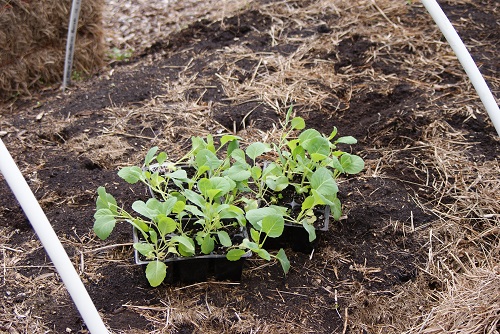 On Monday the planting frenzy began. Thirty four baby cabbage plants went into the ground -- just the first wave. The goal is 80.

Yes it was too wet. Don't care. The forecast gets wetter. Fortunately today's wet forecast didn't manifest -- much. So I cleared the area where another 30 or more cabbages will go, planted peas, lettuce, radishes, beets, and arugula.

And tomorrow's forecast is dry, and Thursday's. But Friday gets damp again, so the next two days are plant, plant, plant. There are all those cabbages, plus broccoli, radicchio, fennel and celery, and seeds, seeds, seeds. I love it.

And while you all were making silly memes about using the cardboard cores of toilet paper rolls as "seeds" for more toilet paper I was actually putting those cardboard tubes in the garden. I cut them in two (two short tubes) and put them around each little cabbage I put in the ground to serve as cutworm "collars." The intent is that they will keep the cutworms from snipping off the little plants at ground level. At least an inch of the collar must be below ground and at least an inch above.

Cutworms are not "worms" but the larvae of a few species of moths, one of which we always called "millers." The larvae live shallowly in the soil and tunnel through popping up at night to wrap themselves around tender stems and cut them off, usually at soil level. They may or may not eat more of the plant. The larger the plant stem, the less likely it is to be nipped off, as the cutworm must be able to wrap completely around it to do its dirty work. If you see a plant nipped off by a cutworm, dig around the ravaged plant and you might find the squishy larvae that feasted on it. Or it might be by a nearby plant, waiting to eat it when night falls. Or you might not find it. They often are camouflaged so well that they are difficult to see in the soil.

Because they have to wrap all the way around a stem to cut it off, some people will stick nails or sticks right of against the stem to prevent the wrapping around. I've tried that. The stems are never straight enough and I couldn't get the nails to stay against the stems. One other method that does work that I have used is wrapping damp strips of newspaper around the stems as I plant them. Again part of the wrap must be below soil level and part above. Wrapping the stems with damp paper is more tedious and time consuming than using the toilet paper cores, but I use it when the cardboard tube supply runs out.

Also, yes, when you have to "mud in" your plants, you still need to water them in, even though the soil is wet already. Watering them in settles the soil in place.

We had some sun this afternoon, so tomorrow the soil will be drier, although still on the mud side. We do what we have to do. Tomorrow I plant. Thursday I plant. Friday I watch it rain again.

It's all business as usual.