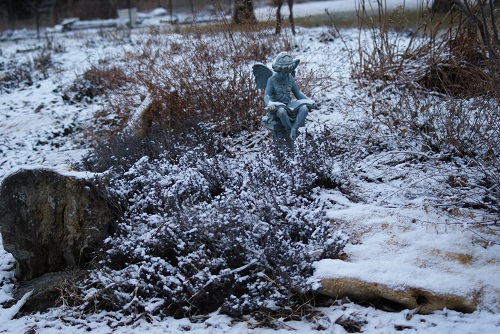 We had a couple of pretty little snows last week, which were gone by the weekend when it rained all day. So the sun hasn't been out much for more than a week.

Yet it's bright inside here, where the amaryllis have put on quite a show. 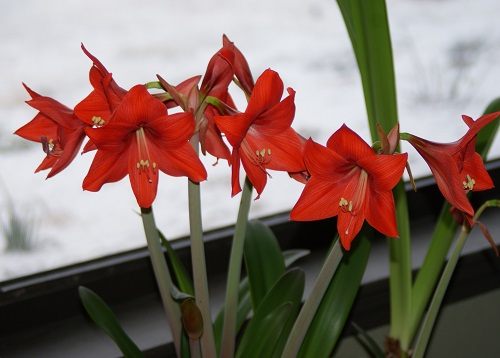 They've already lasted a full week, although a few blossoms have faded. They will be around for most of this week, though.

A few years ago I wrote two or three posts about microgreens, as I'd just started doing them. These were lengthy posts, first about how to grow microgreens, then how to deal with the fungus gnats and damping off that showed up. (I don't add the cinnamon anymore. No more damping off since I'm not reusing the soil. I still deal with fungus gnats, but not for long.)

While I was able to grow microgreens and get rid of the fungus gnats, my microgreen project wasn't perfect. I had trouble keeping them watered properly. When the little greens fell over because they wilted, they usually didn't stand completely tall after receiving water. My husband noticed that after being that way for several days some of the greens near the soil would get slimy. Not pleasant. I tried to be more diligent about keeping them watered, but it still didn't work quite right.

I had been growing the microgreens in a solid bottomed flat and watering from above. But I learned that wasn't the best way to do it. (Obviously, because they were getting mushy.) Then True Leaf Market Seed Company, where I get some of my microgreen seeds and supplies, sent out its e-newsletter with a link to their microgreens growing guide. So, of course, I checked it out.

Aha! I should have put the soil in a flat with a slotted bottom, set inside a solid bottom flat. The soil needed to go into the flat dry -- I had been wetting it before putting it in the flat. After scattering the seeds on the soil and pressing them in, then it's time to wet the seeds and surface thoroughly with a spray bottle, cover the flats so they sprout in the dark. When they sprouts are half and inch or more tall (they'll be yellow green having sprouted in the dark) put half an inch of water in the solid bottom tray and set the tray with the soil in side, so the sprouts are bottom-watered and set them in the light. Then bottom water them from then on. I've found that once they get growing well I need to water them every other day.

The growing guide I linked to above will give more detailed info. The first step on it is to soak the seeds, but you only need to do that with large seeds, like peas. I'm planting tiny seeds -- broccoli, brussels sprouts, kale, and cabbage -- so I don't soak them. I start new trays of microgreens as soon as I set the sprouted ones in light.

My husband is now much happier with the microgreens he eats every day. If you're craving fresh greens from the garden, try microgreens. It's a great gardening and fresh food hit, even in the middle of winter.