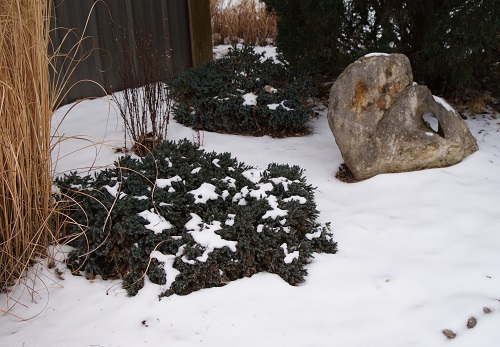 My world remains locked in snow.
It's not much snow, we might have gotten a bit over an inch after several days of snow. Unlike most northeast Kansas snows, however, it has remained on the ground for days. Usually sunny days follow a snow, at least after a day or two, and thawing ensues even if the temperatures don't climb above freezing but just hit the upper 20s. 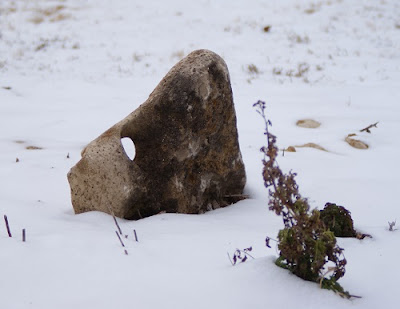 This snow, however, was followed by the coldest stretch of weather we've had in years, and the forecast says it's about to get even colder. They say the sun will shine tomorrow, for the first time this week, although the temperature will remain in the single digits Fahrenheit and even fall below zero.
The bitter cold and cloudy skies don't do much good for one's mental state. I've been feeling scattered and distracted all week, unable to end the day feeling that I have accomplished much.
February is like that.
I started the month on a high note. I'd learned that some ancient cultures considered February a time of purgation, when they would conduct cleansing rites. So I decided to "purge" by doing some deep cleaning. I spent an entire day on our bedroom and master bath. Then moved on to the kitchen. I picked up an old writing project and refreshed that. Started organizing the recipes on my computer so I can print them out and tidy up the binder in which we keep recipes.
The first few days of that first week were a whirlwind, then my energy dropped, it picked up after a couple of days and then fell again. So this week I've kind of been at a standstill, although I feel that I'm doing stuff, I'm not just sitting around... sort of.
February is like that.
I find that getting outside helps me stave off the winter blues. This past week I've meant to get outside and wander around. My insulated overalls, heavy coat and work boots keep me quite warm, especially when I'm moving around. But highs in the teens and cloudy skies and February have kept me inside.
I do get outside a little each day though. Every morning and every evening before bed, and sometimes in between I step outside my back door without putting on a coat and stand for a few minutes just breathing fresh air. Feeling the cold, really feeling the cold and embracing it puts me in touch with the natural world around me. I feel more connected.
Sometimes I go out barefoot, even stepping into the snow, my footprints alongside those of birds and rabbits. The biting cold of the snow reminds me that I am alive, washes away the numbness of dark February days spent indoors.
I started the habit of stepping barefoot in the snow many years ago, when I went bobbing for apples on Halloween and came up with one in which an exclamation mark had been carved. I took that to mean I needed to get more exclamation marks in my life. Stepping barefoot into the snow certainly does cause some exclamations. It's invigorating, enlivening, exhilarating... I've begun to crave it.
I stand outside my back door on a 10-degree F. morning and sing to the wakening world.
I stand outside my back door as the frost forms in the late evening and look for the moon and stars. Even if it's cloudy I search the sky.
I step barefoot into the snow and feel the cold bite as a freezing breeze brushes my face and seeps through my sweater.
I breathe deeply of the bitter air.
I am at one, at peace with the frozen land around me bound by snow.
This gets me through February.
It gets me through.
I go back inside and check the tiny cabbage seedlings that will go into the garden in just six weeks or so. One more turn of the calendar page and I'm looking at planting season. But the planting has begun... cabbages, broccoli, leeks... Soon I'll start some lettuce, then eggplant and peppers, then... then...
Suddenly it's March.
This gets me through February... the "longest" month, when we are so tired of winter.
It gets me through.
Posted by Sandra M. Siebert at 8:31 PM

This is lovely. I relate to so much of it. Thank you.