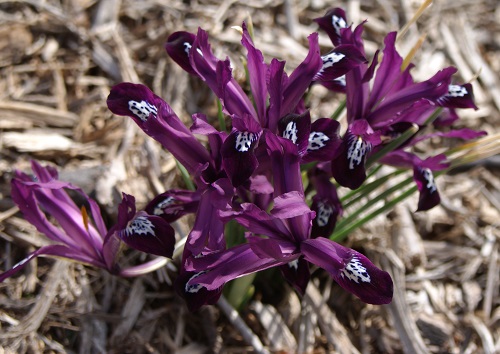 Spring progresses with a procession of blossoms.

First we had crocus and winter aconite, after which a couple of little snowdrops appeared.

Next came these beautiful little rock irises, no more than six inches tall. During the week that followed their blossoming, the wind beat them up a bit, but rock irises in another bed came after the wind.

This is an exciting time of year. Our first harvest was stinging nettles. Once cooked the sting is gone, leaving a richly flavored and highly nutritious food. And we've got chives again.

Today I saw bits of peppermint peering out. Soon I can brew peppermint tea again, my stash of dried herb having been used up a few weeks ago.

An exciting time of year, indeed.

And one filled with a tinge of sadness.

Just minutes after publishing my last post I learned that a friend and neighbor had died in an accident. I did not know him well, but considered him "friend," and the news shocked me. It also took me back to the death of another friend, which also occurred in March but toward the end, so the fourth anniversary of his death is imminent.

Death in Spring. Is this a mercy or a curse? 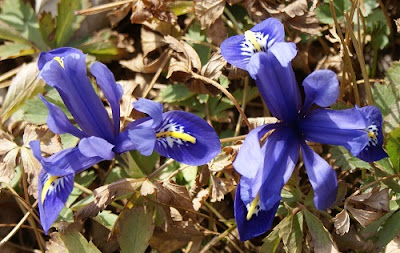 On one hand, it can be difficult to take joy in the budding of new growth, in the blossoming, the increasing activity of birdsong, the raucous singing of the frogs when mourning a death.

Sixteen years ago a faithful cat companion died in the spring. I buried her beneath a spirea bush that showered white petals on her grave. She was laid next to her sister, who had died a few years earlier, also in the spring.

Both times I took comfort in the return of life seen through my tears.

In this season it is difficult to not believe in the never-ending cycle of life, in renewal of the spirit, in the return, as the roots of Soul dig deep into the soil of Spirit to return shoots to the Light, and blossoms. And in this season we can dig in the dirt to bury seeds that appear lifeless, but in truth contain great potential. Comfort.

Death in Spring. That is the time I choose, if I have a choice. To lie down among the green and blossoming, when the roots are awakening and digging where they may find nourishment in me as I have found in them.