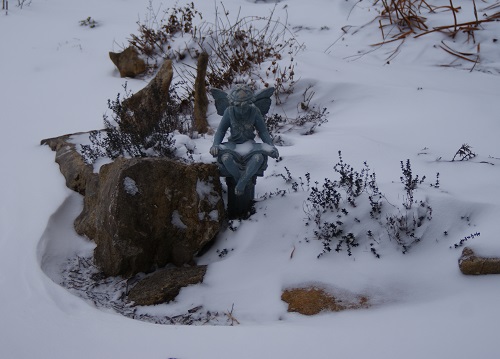 Snow moved in Friday night and blew through Saturday morning. The day was gray and cold, cold, cold. A lovely fog shrouded the world beyond the woods this morning and the afternoon turned sunny.

I went for a walk in the woods, looked for animal tracks (deer, birds, house cat, mouse?), hugged a giant Osage orange tree, and watched the snow that had collected on branches of the red cedar trees melt, sparkle and glitter as it dripped in the sunlight. I came in with twigs and red cedar leaves stuck in my hair. A great afternoon.

In my last post I noted that the germination test on the leek seed was a resounding success. It looked as if all of them had sprouted. Since it's about time to start my leek plants, I planned to go ahead and plant them. 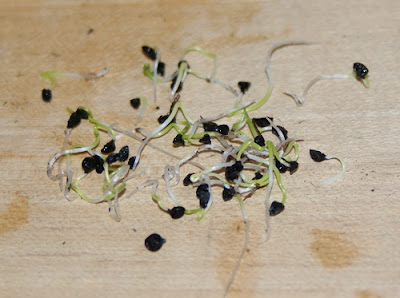 Three days later I went to do just that and found that not only did all of the seeds have tiny roots poking out, but had produced itty bitty greenery, as well. No problem. I went ahead and planted them anyway. However, instead of just dropping the seeds onto the soil and sort of patting them in, knowing the little roots would know which way to go, I poked holes into the soil and dropped in each seedling one by one. That took a little more time than my original plan would have, but it worked.

Initially I made the little holes with my fingers, and then decided I needed a tool. A chopstick works 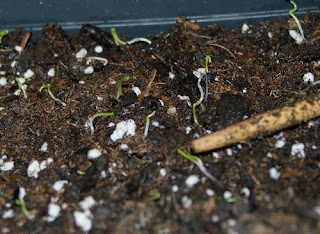 nicely for that task. With the tip of the chopstick in view, you can see how tiny the little seedlings were.

On that same day I started germination tests on some other seeds and checked them yesterday.

The six-year-old Orangeglow watermelon seed germinated 100 percent, it looks like. This seed I collected from watermelon growing in my garden. I am not sure what melons from this seed will be like. I first planted Orangeglow in 2014, along with at least one other melon variety and they likely cross-pollinated. A melon somehow got missed, or I spit seed into the garden, not sure, but a watermelon vine or two grew there the next year. I didn't realize it had produced any melons until I started clearing away cover crop. It was a huge melon, orange and sweet inside.

But I can't depend on that being the case when I plant these seeds. We will see what comes of these.

I will stick a few of these sprouted seeds in a pot and hope I have a nice little melon plant or two when the Extension Master Gardeners Garden Show comes around in two months. I'm in charge of the Edible Garden table.The watermelon plants might be too leggy and pale for a nice display along with the cabbage plants, tomatoes, peppers, lettuce, nasturtiums and begonias. (Begonia flowers are edible.)

When I started the germ test on the watermelon seeds I also started one on some six-year-old carrot seed (just for fun), six-year-old jalapeno seed and seven-year-old cayenne seed. Only a few seeds of each had put out little tails. It will be interesting to see how many actually sprout. I don't plan to plant any of these seeds, but I was curious to know whether they were still viable.

Besides, what else gardening related is there to do in January?