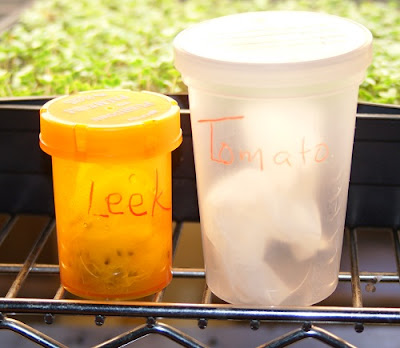 The results are in... mostly.

After I wrote my last post I started germination tests on several different seeds.

Of greatest concern were the snap peas. I have lots of seed in two different containers and no idea when I bought them.

Germination was successful, with a high percentage for both batches of peas. Yes! I will have snap peas again... barring a horrible infestation of cutworms, such as took out my peas two years in a row several years ago. The peas were the first seeds to send out a radicle.

The leeks also showed nearly 100 percent germination. Since it's about time to start my leek plants, I'll go ahead and plant these little seeds. The leek seed was purchased in 2019, and supposedly leek seed has a life expectancy of only a couple of years, which is why I tested it.

The Brandywine tomato looks iffy. So far only two seeds out of probably 30 are showing signs of life. I'll give  them a few more days.

The celery test must start over. Because I thought celery seed needs light to germinate, I put the damp coffee filter with the seeds out flat an stuck in a plastic bag. I forgot to check them for a couple of days and today they were dried out. So, start over. Apparently celery can take two to three weeks to germinate, although I don't recall it ever taking that long when I planted it in soil. Do I want to mess with getting new seed or just take my chances? I don't want to wait three weeks to order seed.

That wraps up the necessary germ tests, more or less. I think I'll probably order more Brandywine tomato seed, unless the germ tests gets radicles soon.

I have some other old seeds earmarked for testing, but that will just be to satisfy my curiosity as these are not seeds I'll replace. One packet contains five-year-old purple haze carrot seeds. I didn't care for the way they grew, but I'm curious if carrot seed that old will germinate. I'll test some seven-year-old jalapeno seed and eight-year-old cayenne seed. I only need two or three plants of each, so I've just been buying plants instead of starting them. Plus I have some six-year-old Oranglow Watermelon seeds that I collected from watermelons growing in my garden. Not sure if I'll plant any if they still germinate, but I'm curious. Science, you know.