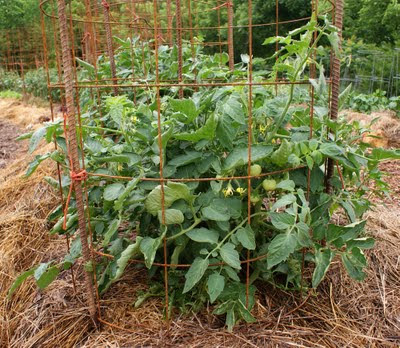 Summer is here with a vengeance. Hot and dry, but with chances of thunderstorms and rain increasing over the next 36 hours. I am hoping for a good, long soak, as I have had to work at keeping things watered.
The cucumbers, squash and melons look terribly thirsty, drooping in the heat of the day. The tomatoes, however, are handling the conditions well. The above photo of an Abraham Lincoln tomato was actually taken about three weeks ago. The plant is much taller now and the little tomatoes are bigger, but still green. Abraham Lincoln is an heirloom variety I am growing for the first time. My SunGold cherry tomatoes are the first to ripen and have become part of my daily salads.

LETTUCE REPORT: Lettuce doesn't care much for heat, even less so when it's dry, so I have been watering it. The long row of lettuce that a few weeks ago made me wonder if I had overplanted has barely been able to provide us with salads each day. Along with the heat and dry weather, it has been munched on by little green caterpillars. Some of the small Merlot lettuce plants were nothing but skeletons. Sprayed some Bt, watered and fed with fish emulsion. They're looking better, but even the fantastic Super Jericho Romaine is on the small side. I fail to marvel at the Mervaille de Quatre Saisons (Marvel of the Four Seasons),  which sort of looks like a speckled romaine type.
Of course, these are not the best conditions in which to test a lettuce variety, but if it can perform at all now, it is a keeper. Red Sails and New Red Fire look like they are one variety with two names. They seem to be a good lettuce for hot summertime.
My bright idea about planting the lettuce in the shade of the tomatoes didn't quite work out, as I failed to take into acount the orientation of the bed, which is sort of east-west, but not quite. Some of the lettuces are in full sun in the hottest part of the day.
I started lettuce seed in little pots a week ago and have seedlings already. I will plant them in the garden, under shade cloth when they are large enough to take care of themselves.
Posted by Sandra M. Siebert at 8:58 PM