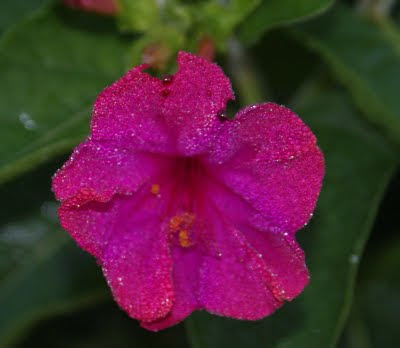 The four o'clocks are in bloom. Their name comes from their habit of opening their bright blossoms in later afternoon (when the temperature starts to drop). But I discovered them in bloom at 6 A.M. They had opened the evening before and simply stayed open all night. 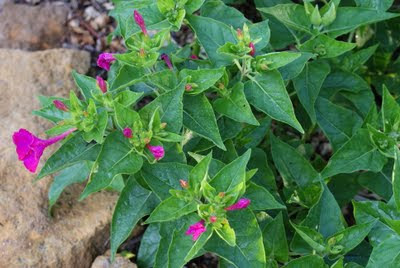 The common garden variety, Mirabilis jalapa, is but one of 350 species of Mirabilis (which is Latin for "wonderful"). This one apparently came from tropical Peru, while another species is native to the prairies of the Dakotas in North America.
Anyway, I have never grown -- nor to my knowledge, seen -- four o'clocks, so I wasn't quite sure what to expect. The seed packet said they reach 2 to 3 feet in height, so I am not sure why I planted them at the front of the flower bed. They are not more than 1 foot tall, yet. And maybe since they are tropical perennials that die at the first frost, they won't get bigger than they are. If I dig the tubers once the top growth dies, maybe I can store them and get them to come back even bigger next year, reaching their shrubby potential. 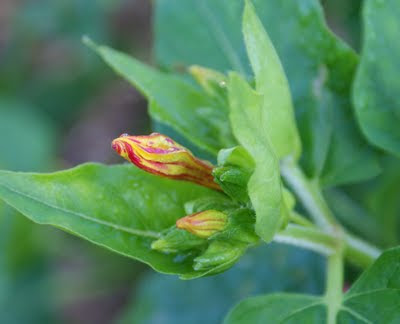 Or maybe I'll just plant more seed next year.
The flowers are quite brightly colored, except for the white ones, and vary a good deal in coloration. The four o'clock was used in early experiments on genetic inheritance, sometime around 1900. So I unwittingly planted a significant flower.
Below are other flowers in bloom right now.

Other things in bloom include zinnias, tansy, speedwell, snapdragons, coneflowers, fading yarrow, butterfly weed (Asclepius), monarda, and others.﻿﻿
Posted by Sandra M. Siebert at 10:47 AM